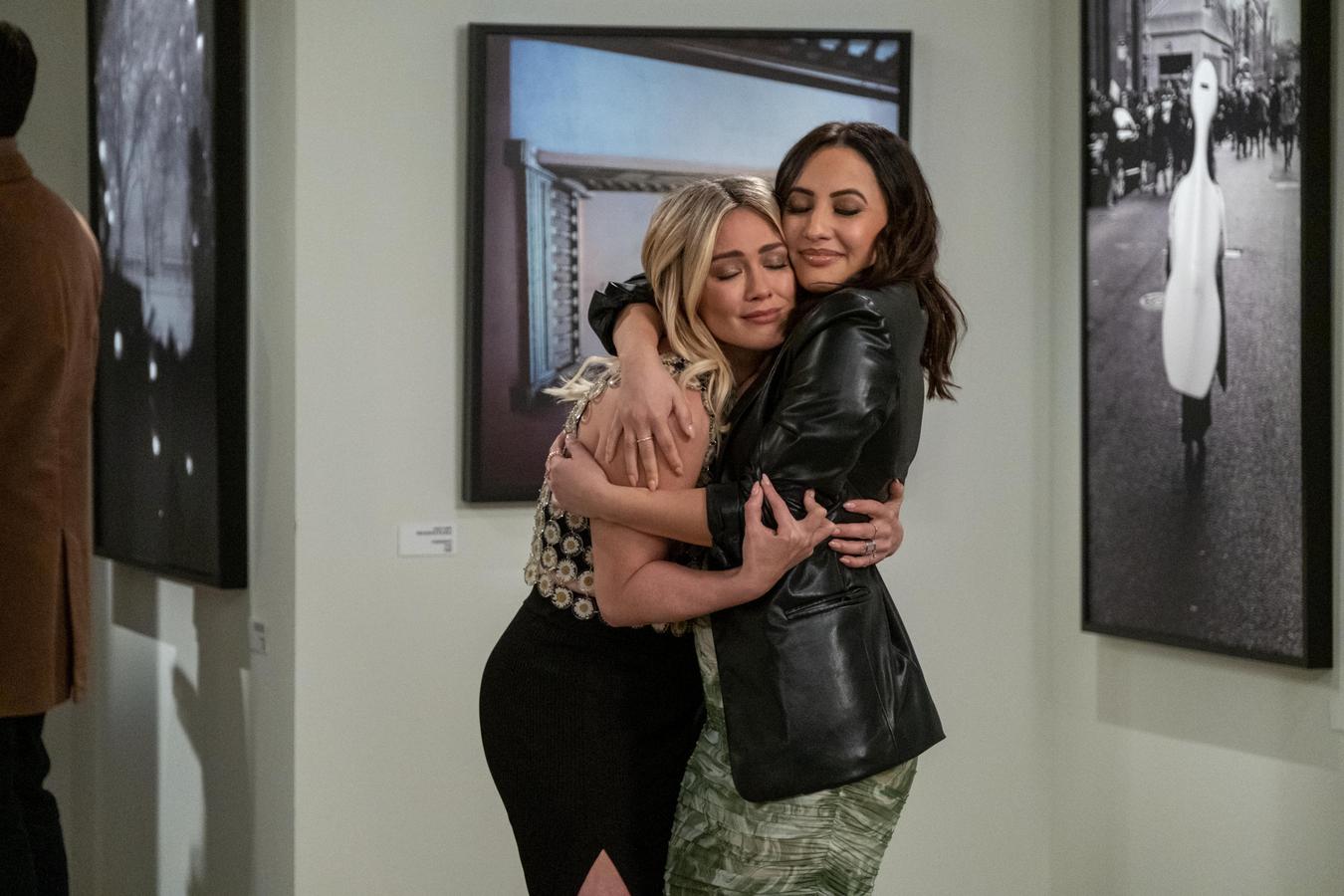 A ten-episode first season for an ensemble comedy is an extremely tall order; with no certain future as to where, when or how a second season might occur, condensing a show’s natural growth into a five-hour period does not leave a lot of room for error. One bad arc, one particularly terrible misfire of a mid-season episode, one groan-worthy How I Met Your Mother throwback… there are a lot of ways for that creative experiment to fall apart quickly, in disastrous fashion, especially if the comedy you’re trying to build is a quasi-sequel to one of the most iconic, memorable (sometimes for the wrong reasons) comedies of the past 20 years.

To its credit, How I Met Your Father – and in particular “Timing is Everything”, the first season finale – has tried valiantly to meet the challenge of establishing its core ensemble quickly, while still leaving room for larger stories like Sophie and Drew, Ellen’s attempts to rebuild her life, and Charlie’s struggles to find his path in life. The results have been decidedly mixed, but with “Jay Street”, HIMYF leaned wholeheartedly into itself, determined to piledrive its way through to the final scenes of the season… where, in an interesting twist, HIMYF ends up pretty much where it was at the end of the pilot episode, with a few bonus narrative wrinkles for dramatic effect.

(Which shouldn’t be that surprising, given how it mirrors How I Met Your Mother‘s first season structure… but we’ll talk more about that series).

Before talking about where it ends, it is worth noting where “Timing is Everything” begins, with Jesse and Sophie having a great first date and night in bed together. All is well, until Jesse mutters “I love you, Sophie” in his sleep… which sends Sophie into an anxiety-ridden spiral, once again revealing her growing proclivity for over-analyzing her own life – and in this case, Jesse’s, as she begins to project her uncertainty onto him, in another interesting episode of Sophie’s Self-Sabotage.

When Jesse later reveals he turned down Meredith’s offer to go on tour to be with her, Sophie assumes he’s turning down his life’s dream for her – though it’s perfectly reasonable for him to not want to jam to “Jay Street” dozens of times for the next 4-6 months, with his viral ex-girlfriend by his side. It is an interesting reaction; but given how we saw Sophie behave at the beginning of her relationship with Drew, there’s definite parallels to be drawn that How I Met Your Father has smartly built into her character.

Jesse’s personality is part of it, as well; still raw from his breakup, still an earnest romantic who is willing to throw himself blindly and fully into something (no matter what the cost to his professional aspirations), even if that ‘thing’ might change in the span of a few weeks. It seems Jesse needs a woman to spark his creativity, which is not exactly ideal; it makes him someone who often lives in extremes, in large gestures and big feelings – two poles that Sophie’s spent so much of her life avoiding.

“Timing is Everything” grounds itself in the idea that these two people could be perfect for each other; but that time isn’t now, and their one night together isn’t guaranteed to happen again. Love is chaotic, finnicky, and often, random, an object of luck and circumstance… and sometimes, just looking at someone across a crowded room (or bar, wink wink) at the right moment. That spark two people feel between each other, statistically will most likely end up in a not-so-great place; and as Sophie runs downstairs to good ol’ McLarens, she runs into a person who would know that just about better than anyone… Robin Scherbatsky.

Robin’s appearance is a genuine surprise – and more importantly, kind of a big leap for How I Met Your Father. You can’t just bring back Canada’s original pop princess for a pointless reason; and by the same token, integrating her too closely into the lives of HIMYF‘s characters would ensure they’d never, ever escape living in the shadow of their predecessors. There are a lot of different ways the series could’ve configured this moment; and I have to say, the way they did choose it, was magnificent.

For so long, like many viewers, I’ve resisted the idea that HIMYF should acknowledge its presence in the How I Metaverse (your welcome); the nod to Ted and Marshall’s apartment was touching nod, but the visuals and references that snowballed slowly through the season were a bit discouraging, especially as HIMYF was stumbling to find its own identity. It’s still trying to do that in “Timing is Everything” (you know, since an entire Sid/Hannah plot line happens off-screen), but where it brings Sophie and Robin into frame together is beautiful, and appropriately sets the stage for the season finale’s conclusion.

When Sophie runs into Robin at the bar (conversing with Carl, who looks as vampire-y as always), she’s running away from Jesse – just as she nearly ran away from a career opportunity in “Rivka Rebel”, and how she’s bailed on rebuilding her relationship with her mother… like a young Robin waltzing herself off to Argentina after a breakup, Sophie’s living in fear, which Robin reminds her is the worst thing she could possibly do. Romance and love is work, and it is something that requires commitment – which, in hand, comes with a recognition of failure, which is where Robin’s specific presence brings this episode some narrative harmony.

At this point in her life, Robin is divorced, traveling the world alone while Ted lives with his family and Barney raises his one-night stand child. Marshall and Lily are in the suburbs, and Robin’s sitting in McLaren’s alone; for all her success, Robin’s arc hasn’t come full circle – but she’s not despondent, or hopeless. She’s sad, and leans on Sophie’s youthful stories of love to capture something that’s been lost to time, but Robin is not a woman who gives into circumstance; over nine seasons, we saw a show build a resilient character (one even more brave and fortified than our former sniveling protagonist – love you and hate you, you piece of work), and it’s a beautiful moment of passing the torch when she offers Sophie some much-needed advice (plus, she’s got all those ear piercings… Robin is still Very Cool, I’m happy to report).

That scene is so fucking good it almost swallows the entire episode whole; the concurrent explosions of the final five minutes are never really able to escape the shadow of that moving intermission, but they certainly put How I Met Your Father in a more interesting place in season two. “Timing is Everything”, in the end, pushes its characters to commit; Charlie to being single, Jesse to presumably go on tour with his ex (though his face suggests there’s more to be told!), and sadly, Sophie to try and meet Jesse, only to realize that the moment had already passed.

It sucks we don’t really get to see Jesse’s point of view here, but the trade off is worth it; the surprise of Sid and Hannah’s marriage also plays nicely as an inverse of How I Met Your Mother‘s first season finale – but more importantly, it hits the reset button on a bicoastal relationship that needs the raised stakes of a more dynamic commitment like a marriage (though please let us get a second attempt at Skype sex in season two). Also, pairing Sid’s nervous joy with Valentina’s heartbreaking admission that her and Charlie have split brings a lot of emotional depth to the episode, pairing a measure of emotional chaos that matches the episode’s narrative tone.

(Oh yeah – Ellen brings home a cat that belongs to Rachel, the woman she met in “The Good Mom”, and takes a job at Goliath. These are treated more as story checkpoints than concretely-developed plots, unfortunately.)

Admittedly, “Timing is Everything” doesn’t exactly take its own title to heed, as it comes screeching in at full speed into the season’s final set of twists, barely able to get to the reveal that The Captain’s divorce (from Boats, Boats, Boats Becky) has brought Ian back to the United States, just in time to show up at Sophie’s first photo exhibit (where she’s showing a picture of Jesse, who of course is not there).

You can almost see the sweat dripping from each actor as they speed through the lines and emotions required to get this season across the finish line; and even though it can barely hang on for the ride, the gamble of “Timing is Everything”, for how it positions this show for a full-fledged, 20-episode second season, makes for a really exciting finale. Though still a bit rough around the edges, How I Met Your Father is neither afraid of its future or its intergenerational legacy; heading into the break with that kind of confidence and momentum, the sky’s the limit for this misfit group when it returns for its sophomore effort.

“Timing is Everything”: B+