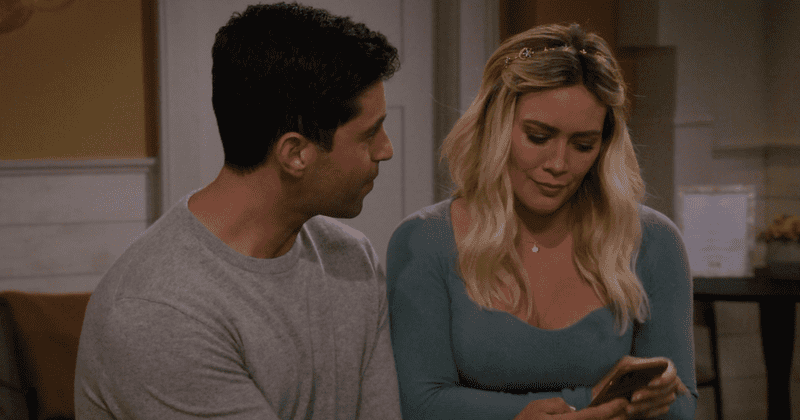 For much of “Stacey”, How I Met Your Father feels like the same flailing, underwhelming sitcom it has embodied for the past three episodes, a mosaic of identity crises and relationship dramas struggling to find its voice at Charlie’s underfunded dinner party, and a dramatic couples weekend. And while we’ve all lamented HIMYF‘s inability to establish a unique voice, dipping back into the old HIMYM bag of tricks pays off here – as “Stacey” shifts into a story of conflict and regret, it touches on the power of reflection in a way that finally begins to bridge the gap between the Sophie we know, and the Sophie telling her story in 2050.

It’s not exactly a neat affair; though credit is due to Donald Diego’s script and how it pulls its disparate threads together in the span of a few minutes, the road to those moments is more than a little bumpy. It’s quickly becoming clear HIMYF is struggling with the genesis of its stories; the basic construction is there – Charlie gets paid and wants to have a party, Sophie wants to have sex with Drew at Sid’s potential wedding venue – but getting those stories up and running is an absolute slog. There are but a few too many desperate jokes and competing energies – some of this comes from a young comedy trying to establish an ensemble, but the messiness (and lack of humor) in each of the first six episodes is a bit disconcerting.

However, as the second act of the episode gives way to the bigger dramatic conflicts, between new and old relationships alike. As Sophie mentions during her opening monologue in 2050, technology has a strange way of bringing the past into the present – dating in 2022 means having a publicly trackable network of relationships, which naturally leads to a number of awkward minefields.

Discovery is not always a pleasant experience after all; and though it is debatable whether one would consider a passport a piece of “technology”, what these items all reveal are the imperfections that form in every relationship. For some, it is simple – Valentina feels like she’s just another notch in Charlie’s depressing international belt when she discovers he’s moved to numerous other countries for women (and to escape his family) in the past.

For others, it is a bit more complicated; for Sid and Hannah, it stems from a deeper lack of communication. “Stacey” reveals that Sid’s impulsive decision to buy a bar had emotional consequences in his relationship, the kind that just don’t wash away with a Kit-Kat bar and an engagement ring. After all, to really love a partner is to entrust them with your future – and with your death, whether that is on a yacht looking at your IRA balance (weird choice, Hannah) or mid-coitus.

That idea is one both powerful and delicate, amorphous and unpredictable, and one easily corrupted by anger and regret. More importantly, it is something that can change unexpectedly over time; Sid realizing he didn’t want to be a doctor, and wanting to do something for himself is a respectable thing – doing so at the cost of your future wife’s potential career and financial health without telling her, is something else – I’ve been wondering if How I Met Your Father would return to Sid’s career choice, and it makes for compelling moments the rest of “Stacey” benefits from.

So what happens if those changing priorities do end a relationship? Often, it leads us to think we’re flawed; which is why Drew lies to Sophie when they visit Sid and Hannah’s potential wedding venue, in an attempt to avoid talking about a horrible experience he’d had with his previous girlfriend. That omission comes at a cost, of course, sending Sophie into a spiral of social media hunting and assumptions, that have nearly consumed her by the episode’s final act.

That third act, while clumsy, really finds a voice in its narrative framing HIMYF has really lacked in previous episodes, bringing its characters closer together by exploring the parallels in their lives, not just awkwardly smushing them together in social situations as its primary function for worldbuilding (because let’s be honest; it’s not very good at that right now). Putting each romantic pair in separate rooms allows HIMYF to slow down a bit, and start building some of the foundations for the romantic comedy stories it really wants to tell – nobody said building a hit was easy, and the growing pains How I Met Your Father‘s struggled through briefly fade away for those few minutes at the end of “Stacey”.

Of course, there are still parts of this episode that are a hot mess – the Jesse-Mia-Ellen love triangle is interesting in theory (except for Jesse’s lame-ass playlists), but the fact Mia talks like a parody Twitter account, and both siblings seem to genuinely hate her, kind of robs that story of any presence beyond “shrill time filler at the dinner party”. And of the relationships we do spend time with, the Charlie/Valencia conflict is easily the least effective; though we haven’t spent a lot of time with Hannah, we’ve spent a lot less time exploring what Charlie and Valencia love about each other, except how their genitals work in concert with each other (which is great!… but not something to build a lasting story on, if we’re being honest with ourselves).

Though the thoroughline of “Stacey” is strong, it is still a series that is really rough around the edges, struggling to align its creative priorities to deliver an episode with any sort of consistency – except with Sophie, as we learn her mother’s personality has led to Sophie having a glaring lack of ex-boyfriends in her adult life. It is still disconcerting how unfunny the series remains; maybe it is the safety with which it delivers punchlines (I think we could do something a little more thoughtful and erotic than the “I am sex” mantra? This is Hulu we are watching, right?), but there is something fundamentally off with the show’s joke structure. That alone has made HIMYF a tough watch early on; but if this show embraces its ability to find pathos in “Stacey”, it might finally be onto something it can build towards a hypothetical second season with.