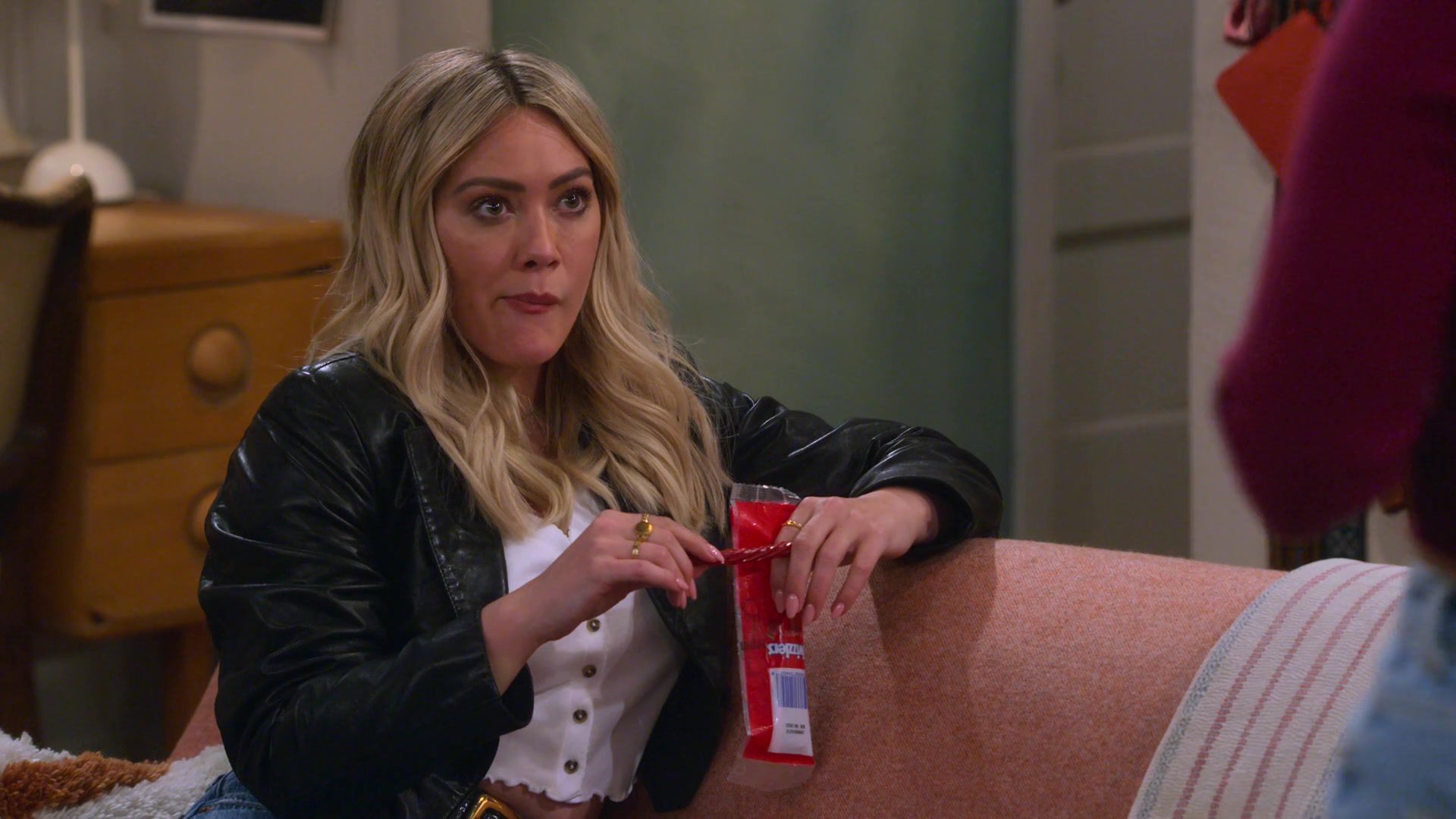 The final ten minutes of “Jay Street” are such an acceleration of How I Met Your Father‘s first season narrative, it’s almost easy to forget there is an entire episode that comes before it. In a zealous attempt to bring everything to a fever pitch at the exact same moment, “Jay Street” and its best moments are a bit dampened by their rhythmic dissonance; it is not a neat affair to get to the arresting final images of each plot line, in a way that feels a bit like How I Met Your Father is putting the season finale horse ahead of the cart.

Perhaps the strangest decision of all is to begin the penultimate episode with the show’s most blatant integration of How I Met Your Mother into this world, with a random cold open depicting The Captain and his third wife (Robin’s former co-anchor Becky) in a dramatic moment – it is so jarring, I had a half-second where I honestly thought my screener had been replaced by a late-era HIMYM episode. And it’s nothing but a fucking tease, an even more maddening choice never justified by the episode to follow, in a way that reeks just a little bit like a show desperate to connect itself to a “universe” (notice how we’ve barely spent anytime in the iconic apartment now rented by Sid and Jesse?).

From there, “Jay Street” immediately shifts back to its own characters, observing the fallout of Meredith’s arrival and Sophie and Jesse’s subsequent kiss. And though that is the episode’s central focus, it is almost as if HIYMF suddenly remembered the season finale was also coming for the rest of its characters – which leads to a lot of scrambling, in the form of Sid and Hannah’s sudden marital conflict, and Charlie’s overwhelming homesickness (and general disregard by the group of his anguish).

(There’s also Ellen trying to pick out an outfit for a job interview at Goliath Market, because apparently Easter eggs are somehow acceptable as entire plot arcs now?… I feel bad for how pointless Ellen is in this episode).

What all four of these stories are attempting to align themselves on is a sense of bubbling discontent within its protagonists, observing how each character flinches when their neatly laid plans are suddenly blown up in their faces (or in Charlie’s case… nobody wants to watch the day of soccer viewing he planned, which really just comes across as rude on everyone else’s part). However, our level of investment in these stories greatly vary; Sophie’s love life is the literal heart of the series, which Hannah’s occasional appearance to lament her career choices while planning two (two!) wedding receptions can’t really hold a candle to.

This makes for a really uneven watch, while Charlie and Ellen are thrown into the backseat (or in today’s world of massive vehicles, that third row of seats in the trunk). In some critical ways, it makes HIMYF show its hand; there’s really no reason to buy into the insanity of Drew’s parents, because they’re introduced as he’s been dumped (and dumped on, thanks to his father’s financial crimes) – and the episode is already spending so much time elsewhere, the introduction of these characters only further complicates a narrative desperate for some room to breathe (and not be in the backseat to the other romances of the show, including the one budding between its protagonists).

By the same token, the wedding that is supposed to happen (Sid and Hannah’s) feels overshadowed by the one that didn’t (Meredith and Jesse), begging the question of why they both have to conquer this episode’s emotional space. Hannah’s dreams, Sid’s anxiety, and Jesse’s uncertainty are all massively valid emotions for the series to explore; but there’s no time, the drama of the moment played loudly over the more nuanced, interesting character moments happening underneath. Much like the episode’s script, the balance between the light and dark isn’t there – and as “Jay Street” rushes through a bunch of set up for next week’s finale, it severely undercuts the emotions of the current moment, a criminal mistake to make for what should be a powerful, dramatic hour hanging on the final cliffhanger.

Whether Jesse shows up or not is certainly important; but with the Captain, Goliath National, and ‘the perfect shot’ literally hanging in the background, How I Met Your Mother seems suddenly more enamored with the world it is living in, rather than the world it is building around its characters. Tethering itself to HIMYM in between this flurry of larger plot beats is disappointing; it displays both a lack in confidence in its own set of characters, but also seems to betray how dramatic and exciting the writers believe their own storytelling is.

And that’s the most disappointing part of “Jay Street”, the feeling that lingers after the adrenaline rush of heartbreaking images in the final two minutes washes away (Charlie is so fucking sad, you guys – but doing a Love, Actually bit in 2022? Even sadder). Had those moments not existed, I’d be a lot more confident where we’re heading at the end of the first season. But for the most part, “Jay Street” feels like it is imitating what it thinks a prestige sitcom in 2022 should be doing; having a bunch of desperate cliffhangers and a sad allegiance to ensuring that yes, the show named after the iconic piece of IP is still the show and world we’re watching here… which, the more you think about it, the more it seems to transparently limit how inventive and unique How I Met Your Father actually aims to be.

Maybe it is the exhausted pessimist within me, but the moment-to-moment beats of “Jay Street” work great on paper – but in practice, feels like a unfortunate case study of this show’s circumstances. Nine episodes is hardly time to build any sort of narrative and emotional momentum; in search of that, this season’s been a series of half-hearted subplots and a rather inert set of central tensions between characters. Every moment How I Met Your Father feels like it is on the edge of something special is when it begins to start looking over its shoulder as the sands of time turn against its favor.

And yet, instead of embracing a more streamlined plot, “Jay Street” pushes its characters to these isolated dramatic pockets, where they’re left with one episode to fully resolve the fundamental crises presented throughout this episode. Given how the inception of those stories played out here, I’m definitely selling low on the season finale – but despite that, am still holding out hope the final 25 minutes treats itself as a soft reset button for its much longer, more opportunity-laden second season (presumably coming later this year).

“Jay Street” is not bad television; it’s just TV with an identity crisis – and more importantly, a penultimate episode without a consistent sense of pathos or the emotional stakes. Its creative chaos that could become an asset, lest it be harnessed into delivering a transformative season finale… though I’m not holding my breath it pulls it off, there are just enough intriguing developments in this penultimate offering that I’m intrigued where the proverbial cards fall.