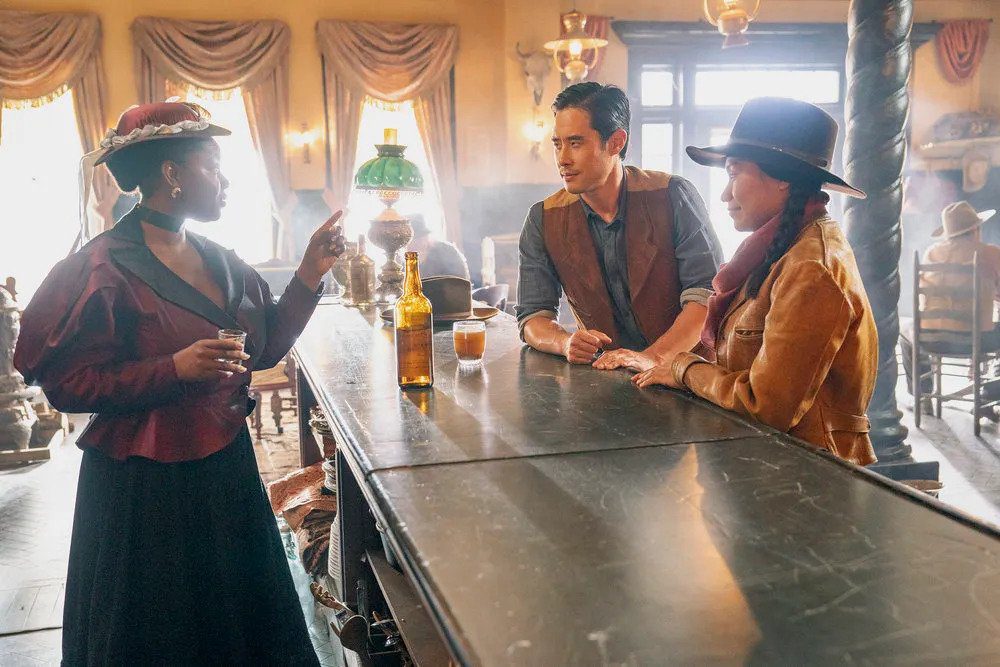 The slow but steady evolution of Quantum Leap from its underwhelming pilot has been a pleasant surprise, adding some much-needed intrigue to what’s been a rather quiet, dour fall season for network dramas (the less we talk about network counterpart La Brea, the better). “Salvation or Bust”, Quantum Leap‘s first foray into another century, is another incremental step forward for the series, continuing to expand its scope in both past and present, and slowly – if somewhat inconsistently – finding ways to begin integrating character and emotion into its rambunctious, ambitious narrative.

In fact, “Salvation or Bust” is such an expansive, thoughtful episode, it has too many interesting threads to pull on, most of which are barely finding their footing before the episode has to draw to a close. This is a good problem to have, of course, but it does show some of the imbalance inherent in its storytelling choices: Ben’s adventure into the 19th century provides a fantastic lens to explore him as a character independent of the person he’s embodying, but the episode constantly has to cut away to the present to continue building drama around the Quantum Leap program (which has felt a bit out of place as a government-run program with seemingly no government oversight).

Admittedly, this is a problem Quantum Leap has made for itself, and one it is going to have to recalibrate on a weekly basis; but as I’ve said in nearly every single review, the closer this series adheres to a template of something like The Pretender, the more likely it is to form the kind of symbiotic relationship necessary to keep these parallel plot lines moving from episode to episode.

In “Salvation or Bust”, the 2022 material is clearly the weaker link: while the introduction of Congresswoman Kavita Adani is an interesting and necessary move for Quantum Leap, it stands in the way of the more interesting story it is telling in 1879, of a small, diverse town coming together to fight against the two pressing forces of modern human existence; corporations and Father Time. Ben’s scenes, which explore everything from the dissonance between Ben’s pacifism and his fiancée’s military background, to the harmonic relationships foundational in forming early American communities.

(Quick aside: does Quantum Leap completely ignore the racism of the period? Definitely, but in the show’s defense, it has not tried to exist as a history lesson at any point in its history. I also don’t think it really serves any narrative purpose here; Salvation is a place of hope and healing for its characters, which lends to its fantastical presentation in a way I kind of enjoyed. Ok, rant over.)

Quite frankly, the “Adani interviews each team member to try and find intel” is hardly compelling material – it’s narratively necessary for the Quantum Leap program to continue running for the time being, as shutting down the very lifeforce driving your show’s narrative five episodes in would really hinder its world and character building abilities (right as stories like Ben and Addison’s temporal separation is starting to pay some dividends, I might add). It makes the story much less interesting than the tale of corporate resistance and generational healing, which piggybacks off the time travel stories of “A Decent Proposal” and “Somebody Up There Likes Ben” in their genuine attempts to find emotionally resonant stories in its 20-30 minute endeavors into the past.

This is always going to be something Quantum Leap struggles with – again, there are pros and cons to its split storytelling approach, and “Salvation or Bust” provides a fantastic microcosm of those strengths and weaknesses. Like previous episodes, “Salvation” is clumsy in how it provides information to Ben and the audience; but in the interest of brevity, it allows room to tell more engaging mini-stories, like the town healer whose father lost his hearing building the railroad, or the sheriff’s daughter whose headfirst approach to protecting the people she loves leads her to make immature, reckless decisions (which have much more dire consequences in 1879 than 2022!).

These little bits of color bring the world around Ben to life – which makes his adherence to non-violence a more interesting point of tension, paying dividends when the town puts together an ingenious plan to use their resources and experience to trap the outlaw gang terrorizing the town, paying off the corporations threatening their community, in a happier (and much cleaner) version of Deadwood.

Is it a bit too neat, and a little too on the nose? Of course it is – but that earnestness is a part of Ben Seong, and thus, Quantum Leap as a whole. And I think the show’s embrace of it is genuine, and an important part of the show’s pathos, which is about dedication, trust, and a righteous pursuit of improving history for the better. It still needs to find better ways to engage with those ideas in 2022, but as the team slowly builds themselves out around the enigmatic, driven Magic, “Salvation or Bust” proves there’s still a lot of potential the show can find, especially with someone like Jenn, who is revealed to be a former hacker who traded in a prison term to come work for Magic (how Magic assembled this team around Ben and Addison will continue to be a point of interest for me as the season develops).

Of course, there’s so much going on in “Salvation or Bust” that Quantum Leap only recaps what’s going on around the fringes with Janis and this show’s connection to its past self – and quite frankly, the more those anomalous stories remain background dressing, the more Quantum Leap has time to figure out its own personality, channeling the goofy, endearing qualities of its former self, into this sleeker, more forward-thinking version of itself. Though “Salvation or Bust” may show the limitations of this revival’s design, it is a definite proof of concept, weaving intriguing stories about the pursuit of freedom, of identity and expression, the kind of themes Quantum Leap‘s continuing to build on with each episode – and each time, getting this grizzled writer a little bit more excited for what this show can be, once it refines its processes and output even further.