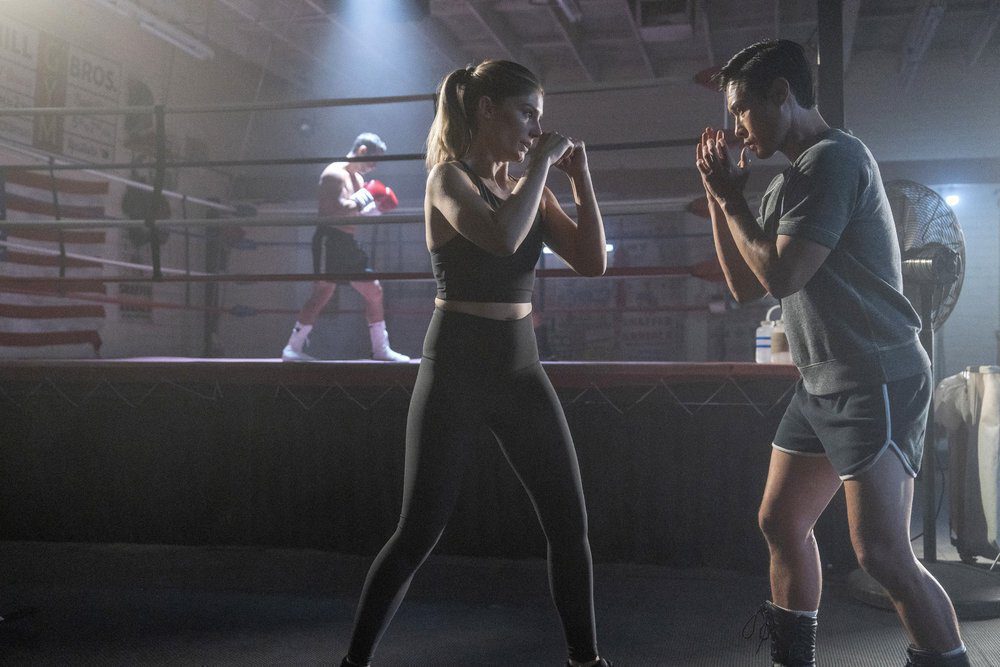 After a much-improved second episode, Quantum Leap‘s third episode “Somebody Up There Likes Ben” has a much more formidable template to build its episodes from. Admittedly, it’s a pretty big risk for a show to set its second episode in space; after the thrill of Ben’s spacewalk, how could Quantum Leap follow up and deliver an engaging episode of action? If that’s not enough, “Somebody Up There” also has to work out the many remaining kinks in the show’s surprisingly ambitious plot, juggling two distinct time periods as it figures itself out on the fly. It’s a lot for any third episode of a series to deliver; but to the credit of “Somebody Up There Likes Ben”, Quantum Leap seems to be settling into its identity quickly, with juuuust enough confidence to push itself across the finish line.

What anchors the episode is really the back half; early on, “Somebody Up There” is clearly struggling to establish its rhythm a bit, whether Addison’s self-neglect or Ben’s attempts at boxing (or Quantum Leap‘s ability to shoot boxing sequences, which is very… hit or miss, to stay on theme). It’s just a little bit clumsy, centering Addison’s emotions squarely on Ben, while he’s in the 1970’s, getting the shit kicked out of him while supposedly preparing for a title fight (the person he leaps into is also banging his opponent’s girlfriend, which this show baaaarely makes an actual plot point). There’s a distinct lack of balance in the story, in that Ben’s state is the only one that seems to matter – but as the episode awkwardly begins to draw out its story of boxing brothers down on their luck, finds a voice that begins to light a fire at the heart of the series.

For a series like Quantum Leap to work on a week-to-week (and frankly, scene-to-scene) basis, these brief insides into the lives of other people have to hit, and give resonance to the larger story of time-separated lovers and the mysteries swirling around the project and the Calavicci family. And here, the story of Danny and Darryl is, to be perfectly lame, a fucking knockout punch, as it slowly reveals Darryl’s mounting debts, and Vietnam War-induced PTSD (thanks to a conveniently buggy Ziggy, all of this information isn’t revealed via lazy exposition early on… more of that please!).

Sure, Daryl’s arc is hardly subtle in its application of displaying mental distress (and the willingness of someone in that time period to address it), but it provides so much important dramatic energy to fuel everything else in the episode. And his story is a touching one – through his brother Danny, Ben is ultimately able to help Darryl avoid committing suicide later in his life, instead becoming one of the earliest veterans to advocate for mental health services for American soldiers coming home from war. It’s a plot that embraces both the melodrama of weekly network television, but ingrains so many interesting story bits – from Addison’s attempts to train him, to the simple knowledge of the emotional weight Darryl carried – without leaning into being a preachy, self-righteous text about social issues Quantum Leap smartly avoids.

More importantly, it establishes Ben finally as someone who is willing to put himself at risk to do the right thing, not just what advances the mission he forgot about; that contrast is key, as “Somebody Up There Likes Ben” slowly begins to unravel Ben’s secret plans with Janis Calavicci, and whatever they’re doing to Ziggy to slingshot him through time (beyond his own lifetime, completely breaking the rules established in the original series). It ain’t looking great for Ben – and even though Addison is still nowhere near as mad as she probably should be right now, provides an opportunity for Quantum Leap to build out Addison’s support system a bit more.

The more Quantum Leap centers some of its emotional arcs around the woman Ben mysteriously left behind, the more it gives itself room to explain why anyone says anything nice about Ben – which, paired with him performing an actual act of selflessness by putting himself at risk of getting a brain injury and being lost to time, makes for a much more driven, coherent procedural drama.

Quantum Leap is still pretty rough around the edges; the shapeless characters of Ian and Jenn still need some development, and the more it teases that Ben will be on a long journey – someone’s even like “probably 10 to 20 leaps” at one point, a line I found just hilarious – the more it will have to build that bridge between story of the week and its overarching narrative (again, go watch The Pretender!!!). However, a pair of strong episodes has certainly piqued my interest in what Quantum Leap is capable of as a series – it may not be the quirky, off-kilter revival we’d probably hoped for, but at least is showing signs of life as something beyond a completely unnecessary, soulless sequel. There’s still plenty of work to do, but like Ben’s journey through time space, it is certainly building up momentum to bring the series to unexpected, and potentially rewarding, new places.