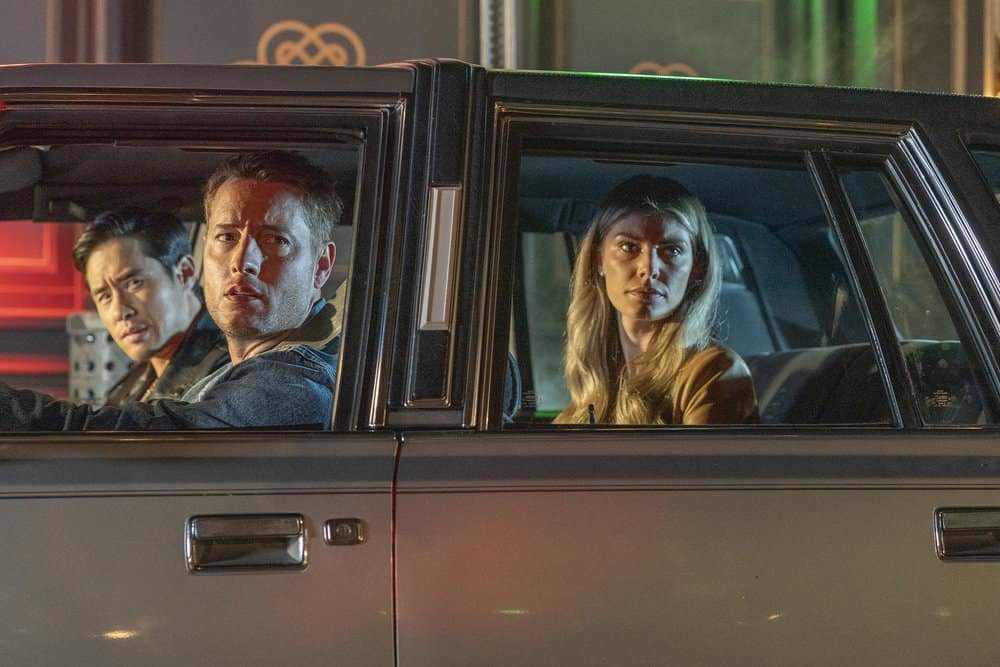 With each scene, it feels like Quantum Leap is learning a little bit more about itself, an exciting proposition for a series whose conception was but a component of Peacock’s creative strategy (“Reboot fuckin’ everything and see what sticks”). Continuing the trend of the previous two episodes, “A Decent Proposal” is another strong offering for the upstart revival, as Ben Song traverses the 1980’s in the body of a female bounty hunter – and of course, Magic continuing to build an emotional, and narrative, bridge to the original series.

What I really like about “A Decent Proposal” (directed by Tank Girl‘s Rachel Talalay, by the way) is how its able to navigate both of its settings in a more balanced, engaging way: as Ben continues to be a bit of a cypher of personality, the discovery of who is is and what he’s up to, is a difficult balancing act. The easiest way, of course, would be to continue to delay getting to The Point – but in a surprising turn of events, Quantum Leap‘s fourth episode stakes its claim as a series of movement, rather than stasis… which, given the narrative pace of most dramatic series in 2022, is a goddamn breath of fresh air.

Where Quantum Leap is still figuring things out on the fly with the balance of two timelines are the stakes it has for defining a character like Addison, which “A Decent Proposal” smartly realizes it can no longer avoid by means of Ben’s convenient amnesia. Addison’s documented struggles with understanding Ben’s motives need to come to a head sooner rather than later if we’re to believe he can be trusted (in spite of his behavior), and Quantum Leap‘s seeming willingness to engage with this crucial subject, looks to inject a more personal thoroughline through whatever time travel story is front and center for the week.

In “A Decent Proposal”, Quantum Leap is trying to show us both sides of Ben: the kind of person that would inspire Magic to keep trying to understand what happened to him in Vietnam, but also a person of questionable integrity, who is up to some secret plan with the daughter of Sam Beckett’s former partner. Addison is stuck in the middle of all of all the show’s storylines – but at times, it feels like the series is almost afraid to engage with the negative aspects of Ben’s decisions on her, as she’s a bit too willing to forgive Ben for lying to her for the past six months.

Ben remembering Addison at the end of the episode, however, makes for a great pairing with the episode’s other big reveal – that Magic’s been trying to find Sam Beckett for years, after feeling the ‘nudge’ he gave him when leaping into his body in Vietnam and saving his entire platoon. Baked into Quantum Leap‘s premise is the idea of trust: that despite what it may seem on the surface, the universe’s intentions for us as humans is righteous and deterministic. Though Magic and Ben may be on parallel missions, there is a trust behind intention that is intriguing, one that helps build on the Plot of the Week story of lovestruck bounty hunters Jake and Eva. It is also what tethers the episode’s emotional arc to Addison – if we act and believe wholeheartedly, our faith can be rewarded, even if it is a risky choice.

Of course, until Ben really begins to remember things, Addison’s loyalty to him feels a bit performative, something Quantum Leap wants us to just accept, so it can reap the benefits of the story’s emotional beats of rediscovering love and trust. But again, it is that idea of intention, which we see again and again in the plots of “A Decent Proposal” – even in the case of Carla the Cartel Leader, who stands as the counterpoint to blind loyalty to what someone shows of themselves on the surface. That consistency across the series so far, is why I’m willing to give it a pass for now: Quantum Leap is not a series prescribing to the modern stylings of being slow, dour and trauma-riddled. There’s an aura of hope around how Addison is approaching Ben; and I want to see it through, as the many different resulting arcs present a wealth of potential for the series to tap into, as it builds a more complex, textured world for its characters to inhabit.

The only real disappointment of “A Decent Proposal” is its inconsistent use of its guest stars; after opening with a few amusing scenes of Ben’s initial reaction to his ‘gender creative experience’ (as Ian giddily describes it), “A Decent Proposal” leans heavily on featured players (and real-life couple) Justin Hartley and Sofia Pernas to carry its story of 1980’s bounty hunters and drug cartels.

Half of it is great as one might expect, Sofia Pernas brings the same kinetic energy she’s brought to Blood & Treasure, electrifying every scene ‘Tammy Jean’ and her red power suit appears in. Justin Hartley, unfortunately, is about as annoying a one-off character you could imagine as Jake, the whiny boyfriend of the woman Ben leaps into – and for a story trying to depict a love story gone mysteriously wrong, his behavior does not offer a ton of suspense. He won’t shut the fuck up about his marriage proposal, and though it is a necessary story to help Ben remember his relationship with Addison, Hartley’s Jake is a rather pathetic personification of the episode’s pathos, depicting the same ideals of Addison, but without the confidence and drive our female co-protagonist offers the proceedings.

That fundamental lack of trust and understanding between Jake and Eva makes the episode’s resolution an underwhelming one; the love between the two is never earned, which makes Ben’s adventure into her body not worth much more than a few good punchlines and gender-swapping ribs at Ben. But it ultimately works as a springboard for the story of Addison and Ben to blossom; and again, the show’s overwhelmingly hopeful pathos (even amongst its stories of subterfuge and cyber sabotage) does allow room for Jake and Eva’s story to resolve neatly, if not in the most three-dimensional, satisfying fashion.

“A Decent Proposal” is a solid episode name, but it’s almost more fitting as a proposition for the series itself; though some of those thrilling glimpses of “Atlantis” haven’t been reached again, Quantum Leap continues to raise its floor, each hour building slightly on what’s come before. Nobody is going to walk away from “A Decent Proposal” completely convinced this series is going to be able to pull off its many ambitious arcs – however, with each episode’s iterative improvements, I get a little more hopeful Quantum Leap is onto something, inching towards becoming the quirky, emotionally-driven procedural TV so desperately needs more of.