Skip to content
Home » Second Look: Friends Season 3 Episode 3 – “The One with the Jam” 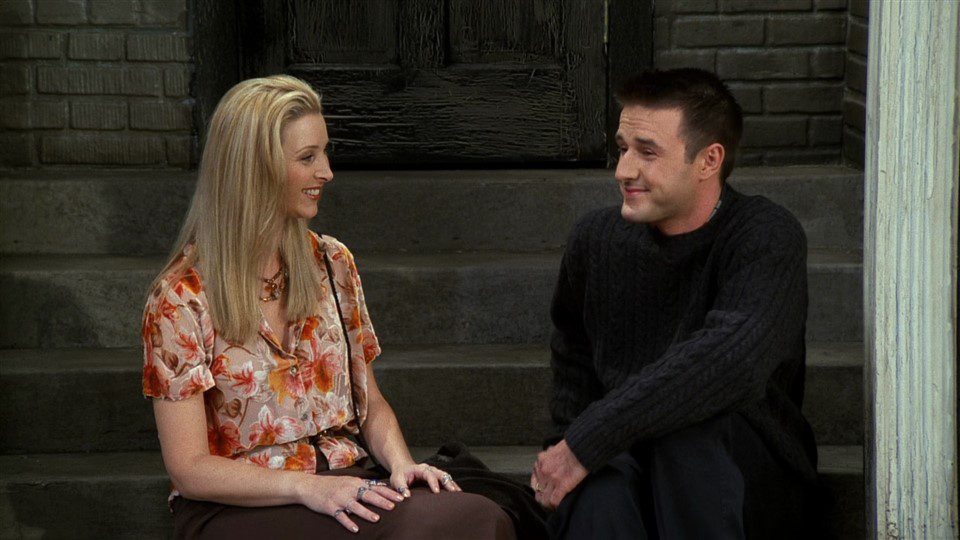 Second Look: Friends Season 3 Episode 3 – “The One with the Jam”

Friends came out firing with a pair of great episodes to start its third season; that momentum, unfortunately, is stalled in “The One with the Jam”, a Phoebe-centric episode that buries a great guest star (a pre-wrestling David Arquette) in a disturbingly unfunny role, and surrounds it with a trio of thoroughly C-tier stories. Which is disappointing; directed by co-executive producer Kevin S. Bright, “The One with the Jam” is, in a surprising twist, a surprisingly visual episode – which, by the end, feels like an instinctive decision to try and breathe some life into what is often a flat script.

It’s not a radical statement to say that Friends often struggled with episodes focused on certain characters; Joey and Phoebe are prime on that list (a debate easily won by Joey, once considering the entirety of the series’ arcs for its main characters). “The One with the Jam”, by centering on a story about Phoebe dating her twin sister’s legally-restricted stalker, is about as bad of an idea as it sounds; not only do Arquette and Kudrow have absolutely no chemistry for the episode’s demanding dialogue and physicality, but the story is just fucking creepy, and never shakes the vibe that this is written by someone with a fundamental misunderstanding of how to approach mentally ill characters (for either comedic or dramatic reasons).

Arquette’s Malcolm, who Phoebe tries to “cure” of his stalking tendencies, is presented as a “harmless” type of stalker; the guy who will take notes from a distance, write poems – and oh yeah, follow you around the fucking city on a timed schedule. There’s literally nothing appealing about him, so the script (credited to Wil Calhoun) tries to play on the assumed immaturity of Malcolm as an endearing point; he just needs to learn a little bit how to be an adult, even though he’s clearly pushing 30 – and again, already has a restraining order against him, a bit that makes the whole endeavor tough to swallow.

It’s also just not funny, whether Friends is trying to play it for farce, or for sincerity; none of it works, and neither of the actors feel like they even want to sell the story convincingly. Combine those factors into a show that’s filmed on a live stage, and you can feel all the oxygen leave the room the second the needle hits vinyl on the A-story of “The One with the Jam”. Frankly, it’s fucking embarrassing, a plot with little to no value in expanding, or even tangentially exploring, Phoebe’s character amongst the insanity – which, given how often she draws the short stick in Friends plot hierarchies, almost feels like a double missed opportunity.

Elsewhere, we have a Chandler and Janice plot that… mostly only involves Chandler, until a late third act twist throws in what ends up a completely unresolved conflict between Ross and Rachel. Does it sound convoluting and unnecessary? That’s because it kind of is; though I’m all for stories that play on Chandler and Ross’s long-standing (and thus, slightly inappropriate and honest) relationship with each other, the “hug for her and roll away” subplot is beyond low stakes. It is good for exactly one good scene; where Ross explains the night cuddle-escaping maneuver with Chandler, replicating the extreme comfort the two expressed in their Central Perk scene in “The One with the Princess Leia Fantasy”.

But there’s just not a lot of meat on the bone; Janice gets injured and Rachel gets mad when she finds out Ross has been sneaking away to his side of the bed for solo sleep. The episode ends there; forget that there’s no resolution, there’s really no climactic moment for any of the four characters! The highest dramatic point of this plot is Janice letting off a trademark “oh my god” to a sadistically welcome studio audience; when that’s the only thing you have to build your story to, it’s clear there’s really nothing there (unless we want to count another episode where Ross and Rachel butt heads, though I’d argue it isn’t worth the exercise).

So what’s left? The jam, of course – which, unfortunately, acts as a visual metaphor for Friends beating the Sad Monica story into a steaming pulp. Three episodes into the season, and Monica’s gone through a repetitive arc of manic behavior, reluctant acceptance, with the finishing flourish of “I’m going to be ok!” in each episode – at this point, it’s not only predictable, but it’s numbingly boring, observable only for the ludicrously cartoonish depiction of Joey’s hunger for Monica’s homemade jam.

It’s certainly not an interesting story about Monica considering surrogacy; though it would be a story the show would return to much later in its run, how it introduces the idea into her character is less than memorable. Again, the story of a difficult breakup and the recovery is prescient; but with Friends batting 0 for 3 on one of its core characters, I’d rather the show just move on then continue in repetitive fashion.

However, this is an episode where Phoebe dates a stalker and Rachel gets mad about Ross sleeping; to say the women of Friends feel… off in this episode is not a surprise, and that’s before we talk about the part where Monica says “it took me 28 years to find one man I wanted to spend the rest of my life with, which means I’m basically going to die alone and so I want to be a mom” (I am BARELY paraphrasing here). It’s a disservice to Monica’s character, who is hardly the show’s most grounded female presence (strangely, that would go to Rachel?), but often its most complex and interesting – at the very least, she’s the most mature character of the group, and “TOW the Jam” undercuts that character to a distressing degree, in what’s become a trend during this opening trio of episodes.

Of course, Joey’s jam obsession is a great runner (even over the closing credits, when Matt LeBlanc plays a little too cute with the physical gag), though one that gets a bit thin by the end of the episode. Thankfully, “TOW the Jam” does utilize this to save face a bit with Joey and Monica’s final kitchen scene. As Joey talks about the life he imagines for Monica (with a big house, a swimming pool, and a hot husband named Hoight), Friends steps away from cynical slapstick for a moment, and returns to a form of 90’s suburbia romanticism I think we can all get on board with. It’s a touching moment, assisted by the physical presence of an physically injured Joey (LeBlanc’s shoulder injury from “The One Where No One’s Ready” being written into the show in the cold open) consoling an emotionally injured Monica, a reminder that at its best, friendship is about just being there, to be a salve for each other’s pains and sorrows.

Twist oneself into enough knots, and you can almost see the potential of the rest of the episode to offer something as emotionally resonant as their final moment; but “The One with the Jam” is too shoddily constructed, with no care for the context of its stories and their meaning around it. And when the premise of your story revolves around a case of “mistaken” stalking (at one point, Phoebe even utters the phrase “it’s not your fault”), there needs to be some serious consideration of how to frame and develop that story. “TOW the Jam” just wants to chase easy punch lines, in a way that more than once had me thinking of 2 Broke Girls – and that’s never, ever a good thing.

Up next: Ross takes on the burgeoning gender roles debate in “The One with the Metaphorical Tunnel”.

2 thoughts on “Second Look: Friends Season 3 Episode 3 – “The One with the Jam””