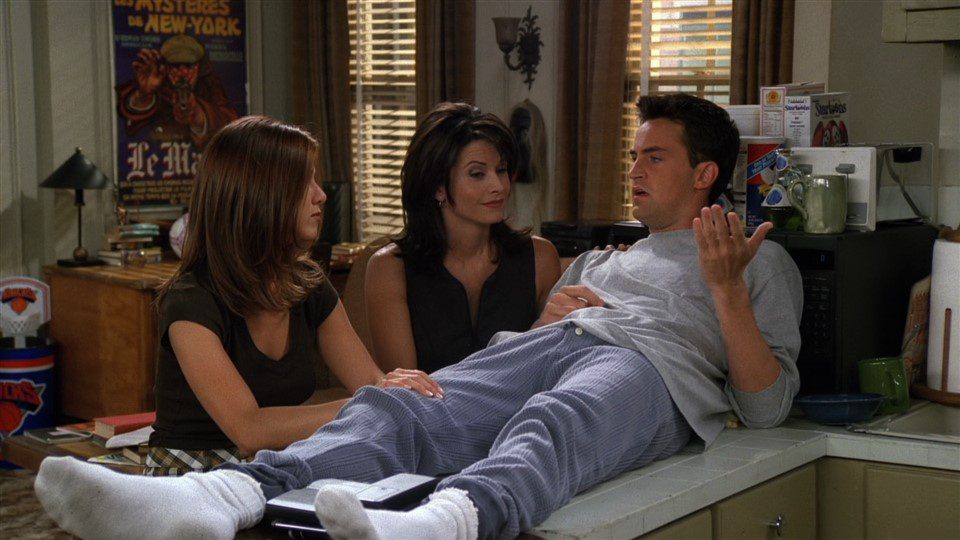 A lot of mid-90’s comedy stems from the cultural conversation surrounding John Gray’s 1992 book Men Are from Mars, Women Are from Venus – a book that sold over 15 million copies in its day. So much of comedies, like Friends, about people in their twenties and thirties revolve around examining the stereotypes the book presents, which mostly boils down to “Men Are Like This, and Women aRe LikE ThIs.” Given that much of sitcom is written in reflection of generational stereotypes (especially in the modern era), it’s no surprise “The One with the Metaphorical Tunnel” feels like a (slightly clumsy) reflection on gender roles; it is but one of many hours of comedy written around the simplistic (and occasionally unhinged) observations that came from what was, at the time, a cultural touchstone of sorts.

Friends, as one of the comedies at the forefront of sexuality in the 1990’s (it was one of the first shows with a gay wedding, and was part of a wave of television normalizing casual sex in popular culture), often embroiled itself in these discussions from a comedic angle. Sometimes, it led to some subtly interesting examinations of male vulnerability; in “The One with the Metaphorical Tunnel”, it is Ross struggling to come to terms with his son Ben playing with a Barbie – and also, of course, Chandler being considered ‘feminine’ for developing an emotional attachment to Janice.

Out of context, it would seem these stories would be natural avenues for Friends to run into trouble; admittedly, it does feel like the Rachel/Monica/Chandler dynamic is toeing a line with tropes about female emotions… but when paired with the show’s open ridicule for Ross’s exasperation at his son’s choice of toys, Friends feels a little ahead of its time (for being a white-washed portrayal of extremely straight New Yorkers, of course), a bit of an unexpected result given the episode’s premise.

The Ross story, in particular, is an interesting one: through the years, Friends would often use his relationship with Ben to examine various characteristics of its mopey anthropologist (it would even try to do the same with Rachel later on, to much lesser effect). Ben provides perhaps the most interesting prism with which to examine Ross; it comes at the intersection of his vulnerability as a divorcee, a single father (with only partial custody of his son), and someone still trying to find their own confidence as a human being.

Just because Ross ‘got the girl’ doesn’t mean he’s lost his insecurities; knowing how annoying and pathetic he can be, it makes sense that “The One with the Metaphorical Tunnel” draws out so much turmoil from Ben’s Barbie doll. There’s a conflict there that Ross can’t resolve; he realizes he’s only a passive participant in his son’s upbringing, and fixates on something to try and generate some semblance of control.

I talk about the dark Ross/Rachel cloud hanging over rewatching this season in every review, but I think we gain another important bit of context for Ross’s character here for what is to come; informed by his timid upbringing, Ross is trying to put himself in a place where he can inflict his will on the world, not the other way around. “The One Where No One’s Ready” really establishes that, and how ineffective and damaging his approach to this can really be at times. With Ben, it feels a bit more harmless (though any child psychologist reading that probably just screamed); it doesn’t necessarily make it funny, but it does present an interesting look at Ross, one that’s worth examining beyond the superficial, easily identifiable characteristics of him trying to shove traditional ideals of masculinity onto his child.

Friends‘ other examination of gender dynamics comes with Chandler, who is slowly starting to realize how vulnerable he’s willing to be with Janice (who again – still married, still has a young child, still has not committed to Chandler beyond someone she’s sleeping with). Here, “The One with the Metaphorical Tunnel” works to mixed results; it’s always funny to watch Chandler squirm and anticipate his own failure, but Friends lack of commitment to understanding Janice’s character robs this story of some needed weight. It’s a story trying to carry a lot of humor and emotion in the same plot, and that’s a tall task for any character to try and carry, especially one as neurotic as Chandler. Oscillating between jokes about females being intensely emotional, and heartfelt scenes of Chandler trying to take earnest steps in his relationship creates a lot of dissonance, and ultimately undercuts what is some really terrific work by Matthew Perry in channeling Chandler’s existential anxieties (especially when he gives Janice the drawer over dinner; his ability to play awkward and earnest without being thoroughly lame can be surprisingly powerful on this show!).

That being said, Chandler’s willingness to engage with his more emotional side provides a nice contrast to Ross’s nonsense; it gives the episode balance, even in the moments where it does feel like it is punching down on Chandler (and women in general) just a bit by hammering away on “crying over ice cream” jokes. What I do like, is how it offers a bridge for characters like Rachel and Chandler, whose interactions are mostly limited to cross-talking, to connect with each other, something any successful comedy about a collection of close friends has to continue to find, even as it continues its march towards (and eventually far, far past) 100 episodes.

The other story of “The One with the Metaphorical Tunnel” is a Phoebe and Joey story – which, given what this season’s already offered, is expectedly mediocre. It’s always telling when Friends is struggling to find a Phoebe story, because they’ll often just make her an entirely different person; an agent, her twin, Joey’s dead agent, a mother, a former homeless women…. often, Friends uses a plug-and-play approach to Phoebe’s character under the guise of “she’s bohemian“, and it often makes for unsatisfying, slapstick-y fare.

That’s exactly what “TOW the Metaphorical Tunnel” offers; when Joey’s agent fails at her job, he employs Phoebe impersonating herself (and a fake assistant), who gets him a commercial job. However, being Joey’s agent means hearing about Joey’s failures, which leads down an emotional road of Joey having to face a bunch of comments and insults he’s definitely heard before – and even occasionally said about himself before. To call the stakes of this story low is a severe understatement; the dramatic tension (or comedic value) of this entire running plot is a net zero on the episode, a strange companion next to Ross’s cultural anxiety or Chandler’s deeply emotional attempts to convince himself that yes, he deserves to be loved.

It makes for a really disorienting watch, never able to consistently attach itself to any of its different emotional beats, all of which just kind of drop off a cliff at the episode’s ending. Chandler’s relationship with Janice is left in limbo (though breaking out the real ice cream is probably a bad sign, as is their multiple previous breakups already), and Joey ends up back at square one ignoring the criticisms of his failure; though Phoebe’s transformation offers a tantalizing preview of the flashback episode to come, there’s really not much else to take away from this episode. And this episode knows it, ending on the tag of Ross’s childhood persona Bee enjoying a tea party in an old home video (featuring a young Monica cleaning up after him, a note I always love), a final, deserved kick in the nards for Ross after spending twenty minutes in fear of his son’s possible future in “show business” (as the episode ironically describes it, breathlessly). “The One with the Metaphorical Tunnel” is the equivalent of Joey resting his head on Monica’s fake boob partway through the episode; comfortable, amusing – but ultimately, weightless in its pursuit of any meaningful truth.

Up next: Friends first big guest star of the season arrives, and Phoebe finds herself stuck in another farce.