Skip to content
Home » Reboot Episode 3 Review: “Growing Pains” Is Onto Something 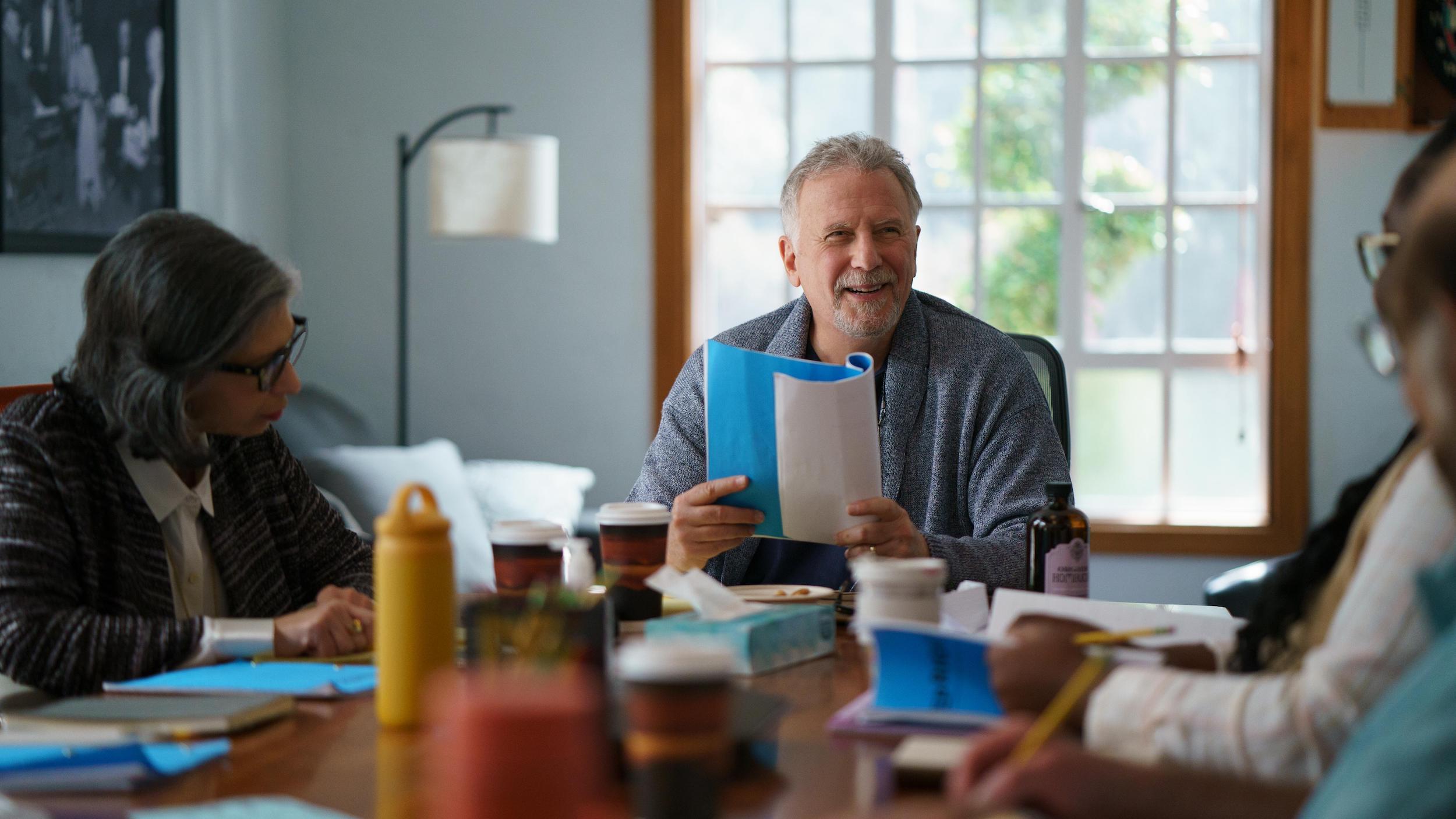 Reboot Episode 3 Review: “Growing Pains” Is Onto Something

With its first two episodes, Reboot set the bar quite high for itself, offering glimpses at a number of different identities it could embody. Did it want to be a character-driven story steeped in reflection, or a cynical meta comedy about the horrors of surviving decades in the Hollywood machine? To its credit, Reboot tries to do a lot in its first hour, a reckless ambition “Growing Pains” has to contend with – and as the episode slowly starts to blends these various elements together, begins to reveal a comedy a bit more challenging (and warmer) than anyone could’ve expected.

At the core of “Growing Pains”, and slowly Reboot as a whole, is the relationship between Hannah and Gordon. Through a story about Gordon’s old colleagues and Hannah’s new writers getting stuck in an intergenerational deadlock in the Step Right Up writer’s room, “Growing Pains” both draws out keen observations in how comedy has changed over the decades and begins to dig into why Hannah and Gordon have such a dysfunctional relationship (beyond, you know, Gordon leaving and starting a new family).

It’s a tightwire to walk, mixing hyper specific bits of character within broader observations on the state of comedy itself; to Reboot‘s credit, the script (credited to John Quaintance) never shies away the challenge. At times, it almost feels like a show in conversation with itself, as Hannah’s writers dismiss Gordon’s stereotypical sitcom writers (aka – older, Jewish New York types) and their insistence on superficial gags. Hannah and her writing team are looking for sophisticated bits of modern humor – two characters talking about Alison Bechdel, for example – while Gordon insists they need something to make their live audience react, rather than “nod in amusement”.

On a simpler series, this would just lead to Gordon saying the word “woke” or one of Hannah’s writers yelling at him about pronouns – but after Gordon makes a great jab at Benny (“Carrot Top… or Carrot Bottom, I don’t want to assume”), Reboot blows this up into a larger conversation about the universality of humor and the more personal conflict brewing between Gordon and Hannah, stationed at opposite ends of the writing table like they’re playing a game of Risk with their writer’s table.

That the plot ends in a moment of connection – the deadlock is broken after Hannah goes to storm out and pratfalls, breaking the tension – is not a surprise. How well Reboot is able to walk the line between being judgmental about comedy or its characters is; in its simplicity, the resolution of their story in “Growing Pains” speaks volumes (something Sean spoke brilliantly to on this week’s podcast about the series).

The other two major stories of the episode are not quite as satisfying narratively – basically, everyone’s horny and not trying to get in trouble over it – but they let the Gordon/Hannah material carry the heavy weight, falling back on a comfortable set of funny stories (the kind that Reed notes are a little racier than what they were on network television). Even the weightless Clay/Zack story finds its way back to the episode’s ethos – if you don’t think Clay awkwardly asking Zack to dinner is an exciting moment that reveals a softer side of Reboot… well, then I don’t know what the fuck we are doing here, because moments like that are the kinds of bedrocks comedies can build their identities on, especially when they are taken at face value, not presented as a showy, dramatic twist.

“Growing Pains” has one of those, too, of course – but before it gets to that moment, it puts Reed and Bree through a mostly throwaway plot of trying to rehearse a sex scene, that is among some of the funniest material I’ve seen from a comedy in 2022. From the on set reaction to Reed’s accidental erection, to how Reboot reflects on the inadvertent corporate fallout from it, the Reed/Bree material is really just a showcase for the young series to display its comedic, and narrative, versatility.

Tied up in jokes about HR meetings about boners, and the geriatric director praying before trying to actually shoot the intimate scene, is a much more challenging story for Reboot to engage with, about two characters lost in life with a very complicated past. Though I’m not super keen to the idea of “man get stiff, woman cry” being the natural reactions of both characters, I think how the episode contends with how those physical reactions manifest through moments of manufactured intimacy, is a great observation on how professional lines can be blurred and confused, when heightened by the anxiety and pressure of creating art – particularly that trying to explore the more quiet, familiar shared moments of experience, like a stolen moment with a longtime partner, or an unexpected spark in the presence of a former lover.

(also, you know, having an intimacy coordinator on set would probably help, something this episode strangely ignores)

Where it ends up – Tiffany and Bree in bed together – is a bit less interesting, the rare moment where Reboot succumbs to its attempts to resist the regular rhythms of streaming series, the one time where it feels like a show stepping out of its lane, so to speak (the equivalent of the cutaway gag in the pilot episode, to make a specific comparison). Though “Growing Pains” is decidedly more consistent in tone and delivery than the first two episodes, the random ending was an eyebrow-raiser, one that doesn’t really try to resolve anything about Bree’s emotional state in the episode, rather offering up another complication I don’t think the show (or Tiffany’s barely-established character) really needed. The two of them bonding was great – and while I’m certainly all for having some horny television, Reboot skips doing the actual work of bringing the two together, letting that happen offscreen so we can just have a glimpse of the ‘shocking’ aftermath.

Despite the disappointing final moments, “Growing Pains” is another encouraging sign of a young, confident comedy coming into its own. Though there are still some rough patches to work out – giving a bit more shape to characters like Clay, for example – how this episode incorporates its many competing ideas, voices, and genres into something cohesive really pays off, and offers glimpses of the true potential this young series has within its grasp.