Skip to content
Home » Second Look: Friends Season 3 Episode 2 – “The One Where No One’s Ready” 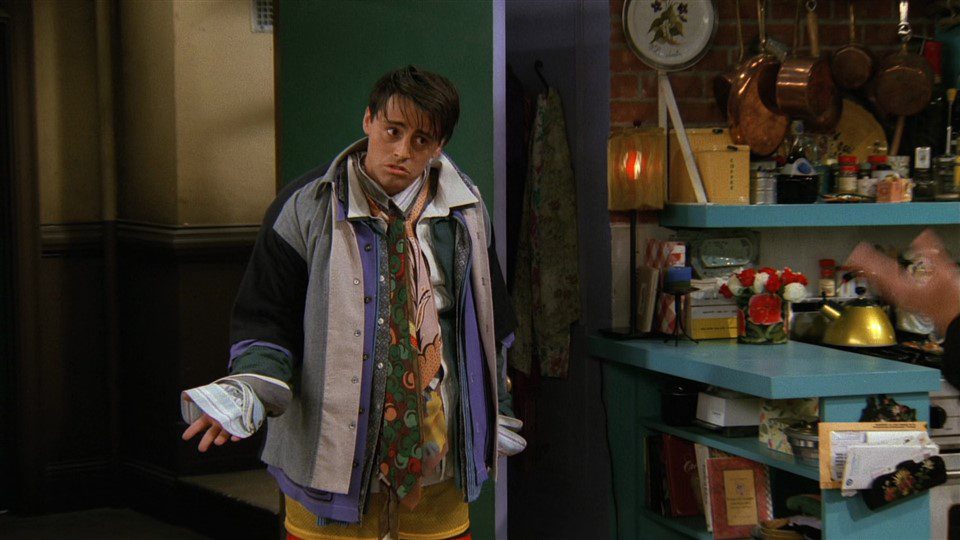 Second Look: Friends Season 3 Episode 2 – “The One Where No One’s Ready”

(for an audio version of this review, check out the Second Look Audiobook)

By the time “The One Where No One’s Ready” aired in 1996, the concept of a ‘bottle’ episode was hardly original; hell, Cheers ran for nearly 300 episodes, and its entire first season takes place on the simplistic bar set (where a scene in the pool room felt like an expedition into another world). A more appropriate influence might be Seinfeld, whose iconic “The Chinese Restaurant” took the bottle episode concept and made it real-time in May 1991, in what’s become perhaps the most influential template for a ‘showy’ sitcom episode to employ – the comedic equivalent of cinema’s modern obsession with “the long take”, one might say.

The bottle episode is also an object of its form, a way for television production to subtly cut corners and save budget for larger, more technically demanding episodes, a restriction that offers a certain freedom to play with the formal trappings of the sitcom, further blurring the lines between film and stage for a television show filmed in front of a live audience.

“The One Where No One’s Ready” is the combination of these two creative and budgetary constructions; it is also the series’ 50th episode, an important demarcation for any series grinding its way to the old-school syndication threshold of 100 episodes. And Friends knew it was is a big moment; there’s no more telling sign of this episode’s importance than when Ross walks in fully tuxedo-ed out a minute into the episode. Immediately, “TOW No One’s Ready” is staking its claim as something different – an energy it would mostly carry through the rest of the episode to great effect.

Perhaps the most impressive part of “TOW No One’s Ready” is its technical intricacy; where many episodes of Friends would struggle to juggle the typical three-story structure of an episode, “No One’s Ready” has four plots careening off the walls of Monica and Rachel’s living room. It is a lot of conflict for Friends to handle; toss in the real-time conceit thrown on top (again, smartly established early when Ross notes they have 26 minutes left to get ready for his gala), “TOW No One’s Ready” is rightfully considered one of the show’s most complicated, and ambitious, episodes.

Friends always had a propensity for flashy episodes (a trait it would indulge, to increasingly lesser effect, as the series wore on); however, that extravagance was usually reserved for big plot points and guest stars, not ambitious script construction. In that sense, “TOW No One’s Ready” is shocking in its delivery, a welcome surprise for the second episode of the season. Watching, one can almost feel the energetic buzz happening on set, a combination of creative energy that is just electric – which the episode smartly wastes no time leaning into, diving immediately into chaos after the chicken fat-enhanced cold open.

Perhaps what’s most impressive about Ira Ungerleider’s script is in how consistent the stories convalesce and escalate, a series of elegantly-designed interactions almost entirely set in Monica’s living room (having an open apartment design certainly makes this easier to film). Anchored by the constant crescendo of Joey and Chandler’s growing fight over the chair, “TOW No One’s Ready” is a masterclass in overlapping plot structures, and how to transfer energy between stories, to keep an episode constantly moving forward (which again, is pretty difficult when there is literally nowhere to go).

Joey and Chandler’s catfight over territory is silly, but it provides all the fuel for the two main stories of the episode, Monica’s freak out and Ross’s frustration with Rachel’s lack of preparedness (the fourth story, Phoebe’s dress, is more a convenient runner than an actual story – but it still has its own distinct beats, ending with her comment about fighting for Christmas). If you take a step back, there aren’t really any stakes in the Chandler/Joey fight except Joey’s ball sweat ending up on Chandler’s clothes; but the emotional crescendo of their conflict is important in providing a runway for the tensions in its A and B stories to blossom, and later take over the narrative for some really strong emotional beats.

The Ross/Rachel story, though seemingly built on a thin concept, actually works as one of the more interesting examinations of their (soon to be) short-lived relationship, presenting an early case for why America’s lovebirds may not exactly be a match made in heaven. It isn’t subtle, but the friction between their personalities is on stark display for the first time in “TOW No One’s Ready” – and it leads to one of their more interesting, nuanced conflicts, when Ross finally loses his patience and angrily takes out his frustrations on Rachel when she can’t decide on her outfit, an immature move to which she responds in kind.

As he throws her shoes and yells in her face, Friends takes a brief turn into the dark, offering a rare glimpse into what can happen when the honeymoon glow begins to wear off in a relationship. Inevitably, our blemishes all rise to the surface, and that adjustment period is a difficult one – one where lines can casually be crossed in the name of passion, as two people who care about each other try to find the shared space between the things they love about each other, and the things that drive them up a fuckin’ wall. Like many young couples, they don’t handle it very well! But considering how popular the pairing had become, their petty arguments across the episode’s 24 minutes is a rather daring move, showing a bit of foundational friction between America’s favorite TV couple, the kind that lingers a bit, even after the episode finds its horny resolution and everyone finally leaves Monica’s apartment.

It’s such an interesting moment for Friends, at a time where the writers were still comfortable contending with its characters as occasionally unlikable people; though it displays a side of Ross I don’t think many fans of the series want to recognize, it feels like an extremely honest moment for the character. Ross is a man who bottles his frustrations, and when they are released, it is almost exclusively done in unhealthy ways; “TOW No One’s Ready” makes no qualms about how shitty those results can be, to its credit. But more importantly, it’s willing to take a dramatic step to show that flaw in its main character, offering a vulnerability that a more saccharine approach would’ve avoided – and as a result, been a lesser episode for it.

Of course, the impact of that is muted by the quick resolution in the third act, and the heightened comedy of Monica and Chandler’s individual reactions to the events conspiring around them (Monica’s reactions to overwriting Richard’s outgoing message is absolute gold) which limit the impact of what the Ross/Rachel story can achieve emotionally – though it’s worth noting that interconnected nature is absolutely to the episode’s benefit, even if it doesn’t reach an intense emotional climax. But it’s an important moment of revelation in their relationship, the first sign of a chink in the romantic armor the show built around those characters throughout its second season – and one I hadn’t really remembered from previous viewings, which may start to recalibrate my thoughts around the larger conflicts to come as the season continues.

Now, is the resolution an absolute cheese fest? Sure, when Ross dramatically begins to drink the glass of chicken fat and Rachel passionately stops him and agrees to get dressed, it is Friends laying into the schmaltz a bit, as the most popular shows on TV are often wont to do. But it works, both as a device to release the insane amount of tension in Monica’s apartment at the moment, and how it reveals – and reconciles, if not in the most emotionally healthy fashion – a festering bit on conflict forming at the heart of their relationship.

Ross will always look for a way for Rachel to disappoint him, and Rachel will always be waiting and hoping for Ross to make the big (and often unnecessary) dramatic gesture to prove his love; what often reads to audiences as romantic feels a little unhealthy sometimes in reality, and it is interesting to re-examine the events of this season, understanding the decisions this show would make later on, and how they were informed by easily-overlooked events of prior episodes (and as the show would continue, years). It’s certainly not a promising sign for the health of their relationship, which is still early enough to have sexy exchanges (you can almost hear the echoes of a generation of 90’s teens jizzing in their pants with Rachel’s last line of the episode) and plenty of romance for characters, and audience, to overlook the red flags.

Two episodes into its third season, and Friends is off to a surprisingly hot start, a renewed sense of creative vigor regaining the momentum that was starting to feel lost during parts of season two. No hot streak lasts forever, of course, but it’s certainly fun to see Friends in the middle of one, especially as the show heads into some of the most important, definitive episodes of the entire series.

Up next: Friends returns to the Mad About You Extended Universe with “The One with the Jam”.