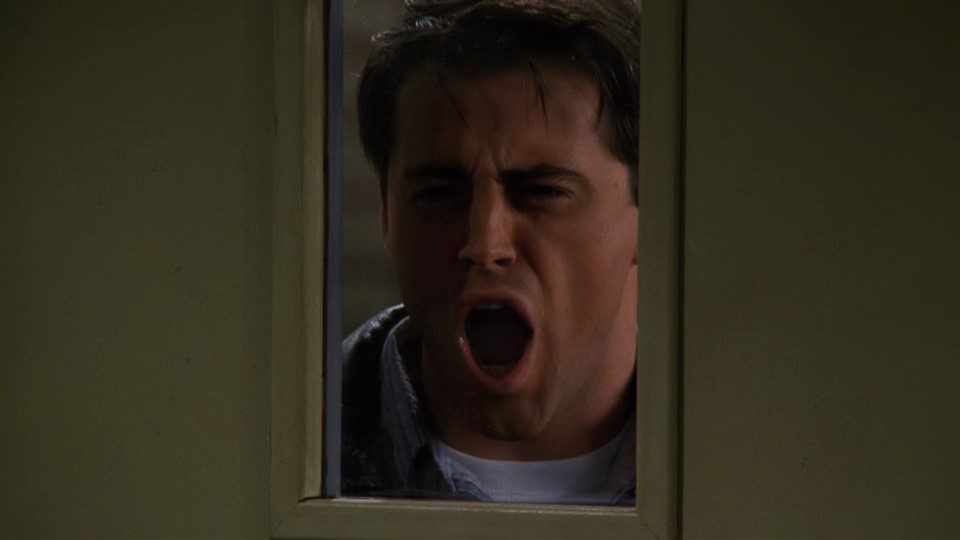 Friends was never really one for plot twists; save for season finales and sweeps week two-parters, the series was very comfortable keeping its serialized structure loose, dipping its toes into multi-episode arcs only occasionally with romantic partners and a handful of Rachel and Ross-related season-ending surprises. In that sense, “The One with the Race Car Bed” really stands in contrast to the show’s typical episodic formula, throwing a unexpected wrench into the episode’s final moments.

“The One with the Race Car” couldn’t begin in a more inconspicuous place; after introducing The Mattress King (aka Janice’s estranged husband) after the cold open, most of the episode is spent using Monica’s mattress purchase as a stress point for a rather weightless plot. After all, the episode isn’t really interested in using Monica as a point of conflict for Chandler; it is actually a rather smart misdirection by episode writer Seth Kurland to build the episode around a series of punchlines about a race car bed (accidentally accepted on delivery by Phoebe) that suddenly blossoms into the most intriguing climatic moment of the season.

It only takes a bit of squinting to see the clockwork-like mechanisms designed to engineer the ending; Phoebe’s got to be distracted to accept the wrong bed on delivery, which leads Monica to bring in Joey as muscle to go have a word with The Mattress King – but it still works, especially given how unexpected it is to see the credits drop on Joey’s astonished face. And it’s even smarter to have Joey discover Janice is cheating on Chandler with her husband; the stakes of Chandler and Joey’s relationship are a lot higher than Chandler and Monica’s at this point in the series, which makes it all the more potent a reveal when it comes along.

For 95% of the episode, Joey isn’t involved in anything related to Chandler (who really isn’t doing anything this episode, except watching Monica finger out the cinnamon in his coffee). Forget Joey; Chandler isn’t even a part of Chandler’s story in this episode; for 13 minutes straight, he isn’t even seen on-screen – and when he is, it’s just to hurl punchlines at Monica for her unexpected sleeping arrangements.

It makes the twist all that effective; when Joey doesn’t believe what he’s seeing, we as audience members do a similar double take. Nothing in this episode had to do with Chandler; but begin to peel back some of the smaller messages of the episode – Phoebe’s lack of perception, Joey’s backfiring attempts to manipulate a situation… the stage is being set for Chandler’s impending heartbreak in “The One With the Race Car Bed,” and knowing where this story is heading, makes it all the more effective.

Watching this episode for the first time, those breadcrumbs are obviously not going to be as obvious; but for an episode that disguises its relevance to the larger plot of season three, “The One With the Race Car Bed” does a decent job of filling its time – even though its A story, Ross squirming through multiple interactions with Ross’s father (played by Ron Leibman, in another fantastic bit of Friends parental casting) is mostly fun for superficial goofs; the episode doesn’t really take the opportunity to use it as a way to further build out their relationship. One could say Rachel’s constant catering to Ross’s emotions are a bit of a sign of what’s to come, but unlike previous episodes‘ observations on their relationship dynamic, nothing here feels intentional in defining anything in the larger context of the series.

Joey’s acting class has even less weight in the larger context of the show; in fact, Joey’s attempt to sabotage one of his student’s auditions for his own benefit feels antithetical to the being that is Joey Tribbiani. Part of Joey’s problem is he can’t get out of his own way; but throughout the series, he sacrifices his career at the expense of ensuring that his shortcomings don’t reflect on others (in fact, most of his more prominent acting arcs are built around that idea). Joey’s a bumbling idiot, but not one who acts out of malicious nature; even his sexual philandering is mostly heard of in punchlines (he’s a rather decent romantic partner when afforded the room; his promiscuity is never, say, disturbing or problematic like a Barney Stinson or some of Sam Malone’s earliest antics).

Having a plot where Joey sabotages a fellow actor – and specifically, where he tries to “ruin” it by telling him to play a boxer “super gay”, just doesn’t feel like the Joey we know and love. Thankfully, where it ends up, is where it should: blowing up in his face when it turns out his fake acting note worked, and he secured his student the job. If there’s anything to glean in “TOW the Race Car Bed” and Joey, it’s that Joey’s maturity is tied to his ego; though Friends often doesn’t take him seriously, there are a lot of punchlines rightfully designed around the idea that Joey should know better, and karmic balance must be restored to the universe. This episode is one of those moments; and smartly, Friends pivots immediately away from it, when it is time to get to the point.

And what a point it is; Joey’s shocked face sets the stage for Friends to start kicking some of its bigger narrative balls in gear – and throwing Chandler into an emotionally vulnerable place is always a boon for Friends when it is reaching for a larger emotional swing. Having Joey be the holder of knowledge in this story is an added bonus; their friendship is a bedrock of the series, and though the show would challenge it less and less as the years wore on, these early seasons are full of great plots when finding new aspects of their friendship to explore.

Of course, this will come at the cost of Janice as a character, and the end of her as a legitimate romantic interest for Chandler on Friends. We’ll talk about the Janice Of It All soon enough, but her third “Oh my god” of the season is her most definitive – and honestly, offers a glimpse into a much more interesting, complex human being than Friends often offers Janice, in a way that made me wish Friends would let guest stars participate in the drama of the series more. The complicated nature of their relationship was always an interesting button Friends could push in these early episodes, and it definitely feels like there’s something being left on the table here – but the sacrifice is worth it, given how effectively the final reveal lands.

“The One with the Race Car Bed” is a prototypical Friends episode for 20 minutes; and then it is just something else entirely for a minute, almost like taking a sideways glance at a version of this series from a different universe – the one where Joey might actually be the star, and the series leaned in harder to the soap opera “training” of his character (if you notice, his reaction at the very end is a much more textured version than what he offers his students during his first teaching session). Regardless, it puts an absolute jolt into what is otherwise a workmanlike episode of the series, a perfect little adrenaline boost to kick up the pace as the show heads into the middle stretch of a very long season.

Up next: Chandler and Phoebe sing Lionel Richie, and “Monica bang” in “The One With the Giant Poking Device”.