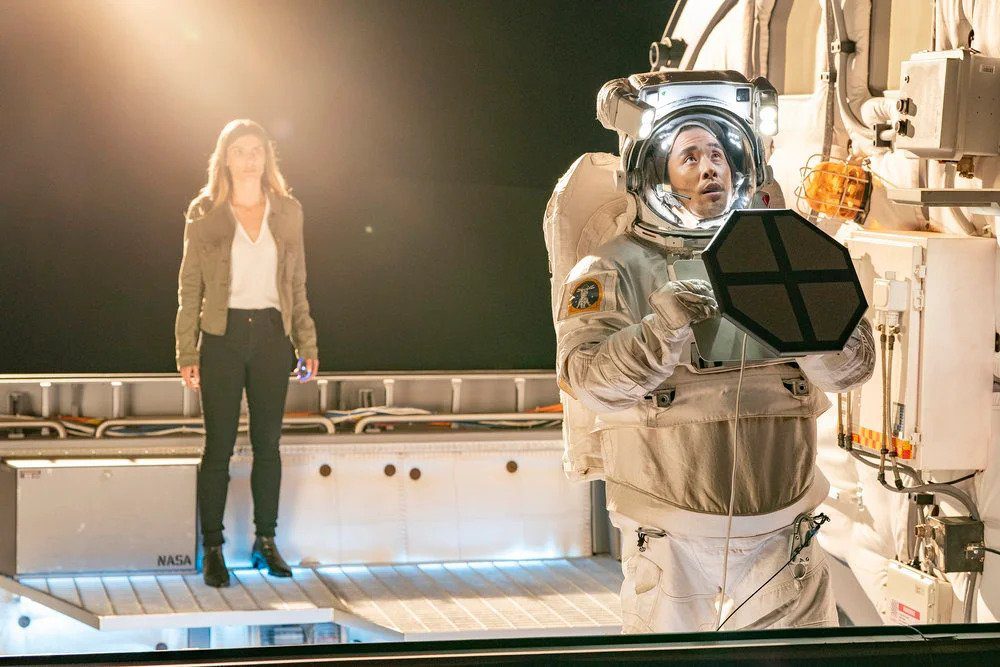 I’m of two minds with “Atlantis”, the (mostly) much-improved second episode of NBC’s Quantum Leap revival. On the one hand, “Atlantis” is a much more purposeful hour of television, both in Ben’s mission (to not die horribly in space) and in how it beings to engage with Addison, who is more established as the series co-protagonist in the episode. On the other hand, Quantum Leap‘s insistence on hanging out in 2022, along with the mental gymnastics it requires to empathize with its main character, continue to display a proclivity to let the show’s weakest elements drive its storytelling, which ultimately makes even an improved Quantum Leap still feel bland and underdeveloped at key moments.

What “Atlantis” does prove is that Quantum Leap is capable of constructing a contained procedural story; unlike the premiere’s forgettable trip to 1985, the space mission Ben warps into offers a completely different set of circumstances – and given that it’s set in fucking space, an entirely different level of stakes. One can take or leave the familial story at the heart of the space ship he’s on; but as perfunctory as it is, it offers a bit of emotional flavor the pilot severely lacked, offering a conduit to the more prominent stories of Ben’s journey of remembering who he was, as Addison tries to reconcile the shattered image of who her fiancée was, both in Hologram Mode and Flesh Mode.

That premise provides a much more dynamic palette for the first half of the episode; while “Atlantis” is establishing the less interesting beats of the space ship drama (and Addison’s underwhelming, predictable thumb drive mystery), Quantum Leap challenges Addison to contend with her amnesiac partner, and the betrayal of trust that occurred when he hacked into the Quantum system and leaped through time. Giving Addison the point of view in this conflict does help give Ben a little bit of necessary shading; why is he working with Janis, Al Calavicci’s daughter (Al was Sam’s best friend in the original series, the OG hologram), and why did he have an exact place in time he needed to leap to, without telling anyone?

The problem is, the longer the episode goes on, the more Addison’s point of view ceded to these other, more plot-driven stories, leaving Addison an undefined, sheepish presence at the fringes of the narrative. She’s happy to trust Ben even if he’s lying to her face, because he’s a good guy who knows how to rally the troops! All bullshit aside, Addison’s character is easily the most interesting of the bunch early on, someone who is struggling with their agency being taken away from them by the person they love; I really hope this isn’t the end of this conflict, because it helps bring color to so much of the material in the first and second act (it even ties into the incidental plot, as the astronaut daughter is frustrated that her father doesn’t trust her!).

The other glaring issue is its insistence on hanging out in the present; why Quantum Leap is suddenly a program that is under some kind of attack from independent cells of people working in secret, is probably nothing that provides the potential for emotional, clarifying storytelling that Ben’s adventures through time should provide. Ben is a reluctant adventurer in space – that proposition alone is so exciting, yet we have to spend half of the episode with Ernie Hudson narrating exposition to every goddamn character on the show; also, its insistence on relying on characters and ideas from the old series almost suggests this series is already struggling for ideas of its own (which, as I see headlines about the producers still holding out hopes Scott Bakula will change his mind and return, doesn’t give me a lot of hope).

(Did I mention Susan Diol reprises her role as Beth Calavicci from the original series? It is relentless in its nostalgic pursuits, even for characters I don’t think former viewers would recognize.)

Through characters like Addison, and even the aggressively generic Ian, Quantum Leap has an opportunity to strike out on its own, without relying on the identity of the legacy IP it is based upon. Though the nods to the material through characters like Magic are nice, how they immediately consume the episode’s attention is distracting, taking away from the elements of the episode that are actually working. It is an absolute drag whenever these exposition heavy moments come to light; and when it leads to things like the rushed resolution to Addison’s emotional journey, it stands as a blight on an episode that felt like it was starting to figure itself out a bit.

Ultimately, it feels like “Atlantis” should’ve been the series pilot; it presents a much more interesting, nuanced dynamic between Ben and Addison, which could provide a foundation for the show to build on, if it is not abandoned to make room for more conspiracy plots and convoluted facts about Ben’s motivations in the recent past (or distant future?). Also, it is set in fucking space – and despite still having some really low-budget ass visuals, actually are done with some panache and personality this time around, and don’t stick out like a sore thumb against the more vaguely futuristic visual designs of the PQL lab and Janis’s server room. Hell, when Ben takes a big space leap and smashes into the Russian satellite is a genuinely exciting moment, a surprising escalation of tension that elicited an unexpectedly large reaction.

It’s a great moment, and one I wish Quantum Leap would anchor itself to more; the more it can be a dumb, fun action series, the less it has to spend time making Addison do these insane rationalizations of Ben’s behavior (in fact, the less they do that, the more fun their dynamic could be! Don’t let him off the hook, there’s so much comedic potential there!!!!). There are glimpses of that kind of show in Quantum Leap‘s second episode, something I desperately hope the series embraces as it begins to build upon the foundation of these first two episodes.