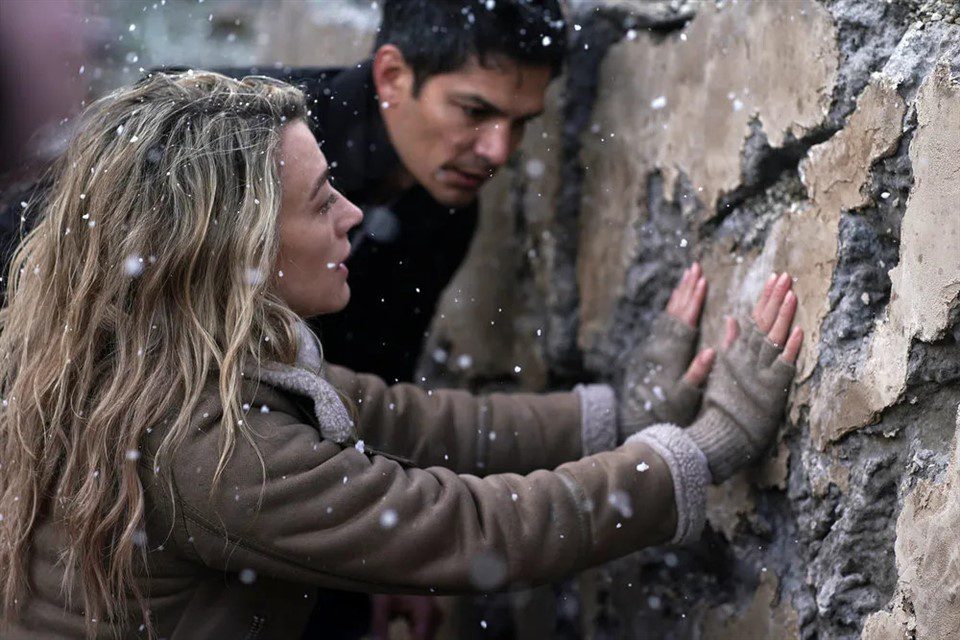 It’s almost hilarious how “The Storm” utterly bungles its own attempt to raise La Brea‘s dramatic stakes; one would think the threat of a massive ice and snow-i-cane would provide an impetus for some truly life and death storytelling. Unfortunately, “The Storm” is more about the lightning bolt of conflicts that arise when little boys get mad at their mommies, than a group of strangers trying to survive the night against the prehistoric elements; and to be honest, I can’t think of a more fitting, sad metaphor for how La Brea presents itself as a series.

That is to say La Brea talks a lot without backing anything up; every time this show tries to convince us there are actual stakes to a situation, either the writing or the budget (or in many cases, both) fail to deliver. In a lot of ways, “The Storm” is an episode-long version of the snake fight we saw back in “The New Arrival”; most of the episode is shot in a way to obfuscate the storm itself, instead relegating a few cheap shots and some fake snow to try and simulate what we’re told is an extremely dangerous storm. Forget about budgets; it just feels narratively cheap, unwilling to engage with even the simplest forms of dramatic tension the isolating nature of the storm offers.

Instead, we spend the entire fucking episode around a three-foot cube of concrete, conspicuously forming a tent over one-half of La Brea‘s “moms and their shitty sons” plot lines. After episodes of bickering about Mary Beth murdering Josh’s father, “The Storm” finally digs into their sordid past; by revealing Mary Beth killed Lucas’s father just to fucking doing it, justifying it as something she “needed” to do, to protect her son and rid the world of a corrupt cop.

This comes but a few scenes after she walks away from the wake of the woman she just killed, loudly proclaiming her justifications for doing so. To be honest, it’s hard to tell what the fuck La Brea is trying to achieve with this character; it might work if she was presented as an outsider/secondary antagonist, but that runs antithesis to its point that “moms go batshit crazy to protect their children”, and instead tries to spend its time justifying her point of view.

The longer La Brea spends in that shitty little enclave (while the good doctor designs an IED using gun powder and a defibrillator), the more it feels like a show chasing its tail, unable to find anything but the most simple plot points to beat over and over again. La Brea, on some level, wants all of its characters to have some redeeming qualities; applying those to one-dimensional shitheads like Mary Beth and Lucas, then spending scene after scene rehashing the same conversation, only made me cheer for the Time Gashers to fail in their mission to save us all from the pain of their intergenerational bickering in future episodes.

Alas, the IED works, and La Brea makes it through its “dangerous” storm without killing anyone; well, except killing my interest in anything to do with Josh, who spends two-third of the episode making Angry Face at mommy for messing up his suicide flight… a turn of character that apparently makes Riley extremely horny for Josh again, even though he’s done nothing but being a little bitch (since the first time she turned him down). To be honest, I don’t know what is lamer – the fact that Riley just turns into a drooling idiot when Josh says dumb things, or that La Brea is so saccharine and boring it didn’t even let them fool around a little bit before the end of the episode.

Elsewhere beyond the Time Gash, we have Scott literally yelling out plot points from LOST (like – are you fucking kidding me at this point?), and an island full of people we don’t know, arbitrarily voting to evict Mary Beth and Eve from the group from their actions that led to Diana’s death last week. I love how any debate between the islanders is held completely off screen, because it ensures that I have no sense of the group vibes, nor does it afford anyone the opportunity to learn anything about characters; not that it matters, since the vote is literally rescinded the second the storm passes.

Not only does “The Storm” undercut its own stakes with poor shot composition and lame plotting, but it ends the episode in the exact same place it started; save for some stilted Mommy Problems reunions, La Brea ends precisely where it was last week, even though ostensibly the most dangerous type of prehistoric ice storm you could imagine just ripped through it and forced all its characters into difficult, thought-provoking positions (it was so dangerous, most characters didn’t even go inside, unless a plot demanded it! Ty spent the whole episode in a cave with a tribal woman who spoke 10 words the whole time!).

…Oh yeah, and on the other side of the Time Gash, Gavin tries to track down his birth family, and Izzy whines about going to school. Literally nothing happens, except his arbitrary visions to make sure we touch on that Lesbian Grief; it’s so inert, it’s not even worth talking about.

At this point, La Brea is officially on cancellation watch; there’s no way this show’s bland mix of nonsensically obtuse plot and collection of lame-ass characters is offering anything particularly tantalizing or evocative. The premise should be pretty simple; be weird and do cool shit with CGI animals – “The Storm” is so inept at building even the most base level of tension out of its premise, it begs the question of how it is going to be able to deliver on any of the climatic beats to come; nothing in the first seven hours of this series has presented evidence we should have faith in its ability to do so, which begs a lot of questions about whether the series is worth investing in.

Given how little the titular noun actually affects the narrative of the episode is troubling; not just for the sake of coherency, but in just how easy a layup La Brea airballs with this premise. It almost feels like the writers themselves don’t care, and are just pushing themselves through the pain of crafting an entire season of scripts with tunnel vision. I’m not here to predict those types of things, of course, but when something is as wickedly boring and uninterested in trying anything of note, the mind can’t help but wonder just what is going into the thinking of La Brea – next week’s episode appears to start providing those answers, but at the end of “The Storm”, it’s hard to rustle up excitement to see what those answers are, given how little care is being put into La Brea to be an entertaining product of any lasting value.