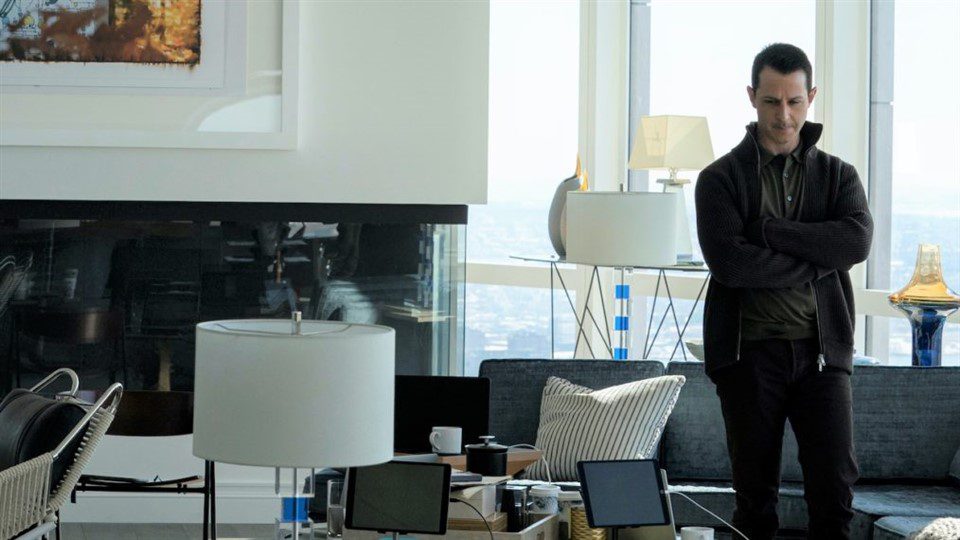 I always appreciate a television show willing to put its nuts on the table in the first act; Succession‘s fourth episode, “Lion in the Meadow”, does this by setting the stage early for a Kendall/Logan showdown. Separated since their last discussion on the family yacht, season three of Succession‘s built palpable tension having the two shit talk each other through various representatives (often including Shiv), and the allure of continuing to edge the audience along for their unhappy reunion is tough to resist. As Kendall would say, establishing the stakes of the episode that early is first-rate composition; more fascinating, however, is how that inevitable showdown would play out.

Directed by the filmmaking duo Shari Springer Berman & Robert Pulcini and written by Jon Brown, “Lion in the Meadow” has a tall task of keeping a lot of plates spinning – interestingly – while a heavyweight stare down takes place on some shithead billionaire’s island (one that’s so big the owner doesn’t know his way around in). Though everything this season continues to be about positioning and examination, “Lion in the Meadow” manages to keep all those various plot threads kinetic with a simple change in temperature, setting everyone’s scrambling actions four days ahead of the company’s potentially climactic shareholder meeting.

The premise of “Lion in the Meadow” is really quite simple: Kendall and Logan dance for an investor, while Shiv finds out just how little respect everyone in Waystar (and her family) has for her. It’s all about imagery; Shiv is trying to project strength, Kendall and Logan are attempting to appear unified – and Roman is worried about everyone else, looking for dirt on his brother and immaturely projecting his insecurities onto Gerri (who is really not in the mood, as negotiations around the company with Sandy and Stewie continue to go poorly). Even Greg is trying to make things look cool, even though he has absolutely no fucking clue what he is doing; though “Lion in the Meadow” certainly feels hectic at times, the thematic undercurrents keep the episode moving like a bullet train through the entire hour.

Where the episode really finds its voice in examining these ideas is through its use of dialogue; Succession is always ready with a quip or genius turn of phrase, but how “Lion in the Meadow” juxtaposes the various negotiations of the episode against the overwhelming silence between Kendall and Logan makes for phenomenal contrast. It gives the script some texture, rather than feel like a scattered collection of strategy sessions and shit talking exchanges; it presents Kendall and Logan as the very uncomfortable heart of the storm, quiet and consistent while the chaos rages around them, a byproduct of their father/son conflict.

This makes scenes like Connor’s begging for money, fit in much better than it might seem on paper; in a show where everything is discussed and analyzed, “Lion in the Meadow” mostly keeps characters making decisions in the unknown, an additional layer of pressure that crystallizes some of the repetitive material in interesting ways. Like everyone else, Connor is so worried about the ripple effects of his actions (and finances, quite explicitly) that he fails to consider the actual human emotion in making major professional (and familial) decisions – he’s a perfect embodiment of Shiv’s prescient reminder that nobody in this family or business feels any shame, and those who do are trying to utilize a currency with negative value (after all, who has ever been heralded for apologizing and maturing? Not in this society LOL).

Above all, “Lion in the Meadow” relies on making its characters squirm through a lot of trademark zoom-ins (returning to more traditional visual style, after Cathy Yan’s more muted departure in “The Disruption”) as it lays out the various scenarios that may play out in the near future. Succession is so fucking good at that anticipation, then subverting those expectations; look no further than those silent moments between Logan and Kendall, moments where you’d expect big, expressive moments of conflict (or at the very least, some tantalizingly-delivered barbs) for how masterful Succession is with tone.

Most noticeably, it does really well in expressing what’s left unsaid: Gerri and Roman’s relationship, where Greg’s loyalties actually lie (Tom saying he signed the paperwork was wholly unconvincing), and Josh’s attempts to guide the Roy men into saying the things he wants to hear. Once the guns are out and pressed against people’s temples (or in the case of the poor man in Kendall’s path at his bachelor party, a literal tattoo gun), nobody is willing to pull the trigger; and those that have on their own fate, like Tom, are already questioning their decision, proving that Logan is right when he says there are no absolutes, no moment where life crystallizes and everything makes sense (or is fair in any way).

There may not be any individual moments in “Lion in the Meadow” that will ascend into the pantheon of Succession‘s greatest scenes, but in concert with each other, their harmony is undeniable, making a silent scene between two characters walking through a nondescript field as electric as the show’s more classical dramatic moments. To quote Kendall again, everything in this episode is a fuck pie – and though there are no coherent resolutions to anything, be it Shiv’s failed attempts at asserting power or the fallout from Josh’s decision to pull his shares out of WayStar, “Lion in the Meadow” is a classic episode of Succession, one distinctly in tune with how evocative the interplay with its characters can be, even between its flashier episodes and big, meme-able “Rape Me” moments.

Season three is really starting to gather momentum, and as a precursor to the dramatic fulcrum of the impending shareholder meeting, “Lion in the Meadow” is a damn near flawless episode of television, maintaining the high-wire tension of its core stories, while still finding room for expressive nuance of characters telling everyone they want, and wordlessly digging into what they really want (if they even know at all). The fight for survival (and fortune) is on, and Succession feels like its finally warmed up and stretched out – which means we should be in for a fucking ride these next five episodes, or for one last Kendall quote, to see some “good shit manifested”.