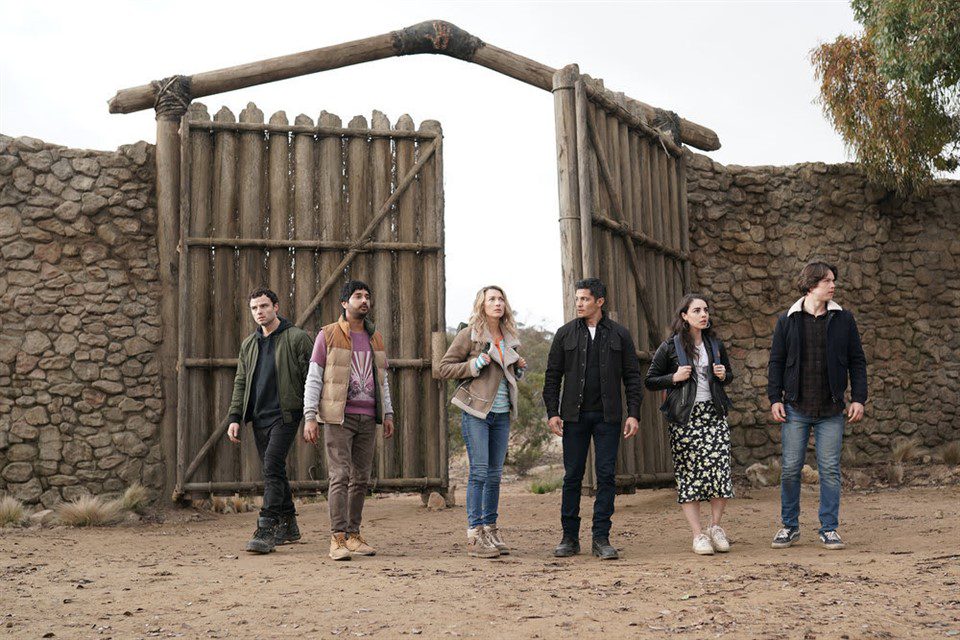 During the climactic moments of “The Fort”, La Brea‘s interminably mediocre fifth episode, Eve Harris looks to the sky and notices the Time Gash is starting to close in the sky. She’s speaking very literally, of course, but it serves as an unintentional metaphor for the show’s window of opportunity; as La Brea continues to stumble lifelessly through a series of predictable stories, it feels like this show is running out of time to hook an audience, to deliver something of intrigue that promises better stories are ahead.

The biggest issue with “The Fort” is not even how mindlessly boring it all is; the empty huts our protagonists stumble upon and the mostly-silent tribe of people chasing them around are another fitting metaphor for La Brea‘s bland offering of beige characters and dramatically flat situations. And that is not an impressive parallel, or one I think the writers of La Brea desire to have; but it’s right there, arguably the only interesting thing worth considering in 40 minutes of what can be described as narrative carrot-chasing, where it feels like the writers themselves have no idea how to get from point A to point B.

It’s quite strange to watch a show doing everything and nothing at the same time; like Izzy’s eyebrows conveying emotion, La Brea takes quite a lot of effort to deliver a whole lot of unconvincing material. It’s all busy-handed table-setting, without interesting characters underneath it; and it’s hard to take things like Scott and Lucas’s “dramatic” kidnapping or Lily’s own kidnapping story seriously when the show’s done nothing for us to invest in its characters. If La Brea doesn’t know why Scott or Veronica are interesting characters – which it certainly seems they do not – then it makes their moments of conflict exist with precisely zero stakes… which again, not a great sign for a freshman drama trying to build momentum as it heads into its second act.

So instead, we get numerous closeup of Izzy’s anxious tics and a handful of scenes where characters desperately insist that wait, there’s a mystery to reveal! “The Fort” presents itself as an hour of secrets – secret tribes, government secrets, Eve’s secret, Lily’s secret, etc. – but none of them are really answered, a lack of narrative commitment that leaks through to its characters. That’s why the actions of say, Josh, make precisely no sense in this episode: he sheepishly can’t flirt with Riley (who shuts him down romantically), then turns into a hard-nosed badass with an abundance of confidence (who then gets a kiss from Riley)… characters like Josh and Izzy simply act as the plot requires them to, in what is some of the flimsiest plot construction in this television critic’s recent memory.

It leads to stunningly idiotic moments, like when Izzy spends the entire episode acting sad that Gavin might have to go on a suicide mission; until we need to have a dramatic crescendo later on, when suddenly she’s all fucking gung-ho about the plan to slide through the closing Time Gash. Yes, the circumstances of that decision change, but without any characterization beyond “always on the edge of tears”, the various shifts La Brea tries to present with Izzy – and other characters, from Josh to Levi, who is so quick to throw his boy Gavin under the bus – are unconvincing, and undersell what are already a series of rote, uninteresting plot developments.

An episode like “The Fort” should raise intriguing questions; who are the tribe of electrocuters hiding in prehistoric times, beyond vaguely-defined connections to the Mojave Time Gash incident? Why does this keep happening? How the fuck is everyone doing laundry through the Time Gash? Instead, we get a bunch of scenes showing random people that are never explained, we have a kidnapping that reveals precisely nothing about its characters… and Gavin doing a handful of scenes in various airport hangers, which is about as effective a palette cleanser as you think it might be.

There’s clearly a larger story La Brea is deliberately building to; one can almost feel the blocks of its foundation being slammed into place each time we’re offered a leaden, vague explanation suggesting towards something that’s going on, either 10,000 years ago, three years ago… or sometime in the future, I imagine, because if there’s one thing La Brea insists on doing, it is adding new plot points, even when it hasn’t utilized, or even justified, many of the stories it is telling in the present. La Brea‘s vague obsession with the future, and the constant hand holding it forces upon the audience to lead them there (dear writers: not every other line of dialogue has to tease the next plot point; you can just say it), is just uninspired television, that feels desperate to maintain a smokescreen of quality, rather than truly engage with its characters and premise, and take some larger creative risks – if La Brea was awful, but daring, it would be a much more interesting show to watch than the already-flatlining narrative arc being offered in its current form.

Bad is forgivable; boring is never forgivable, however, and in that regard, La Brea is a sinner that would make the demons of Evil giggle with glee. We don’t even get any CGI animals in this episode – and at this point, if all you’re offering is flaccid domestic drama with a penchant for narrative blue balls, then what are we doing here? If La Brea can light a fire under itself and start moving forward again, some of these character flaws will be less prominent, and feel a lot less soul-suckin. However, with La Brea neither bringing the noise or the funk through its first handful of episodes, “The Fort” is the dramatic equivalent of flat soda: over-sweetened and underflavored, a dull, thick sludge of uninspired characters and stories I can’t imagine anyone is excited to experience.