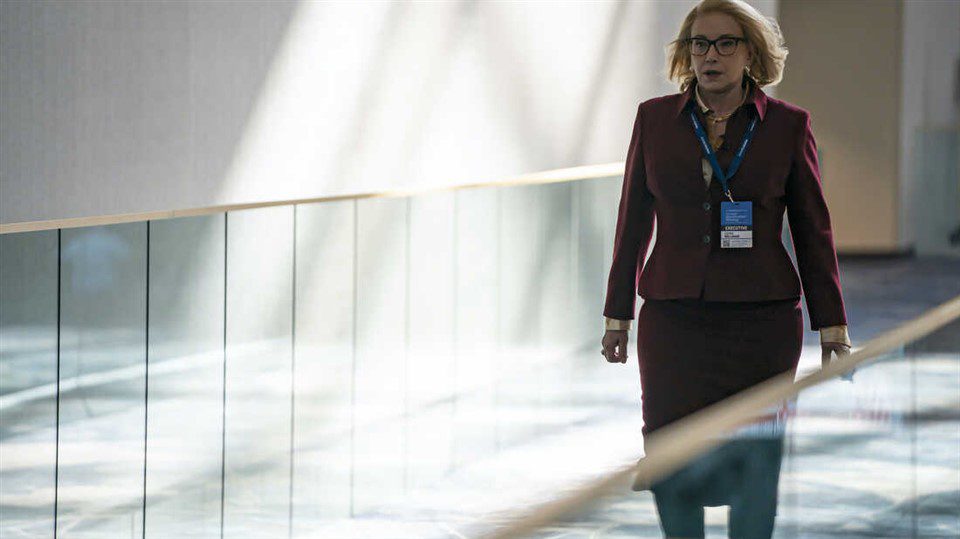 There are few absolutes on television; Succession delivering when all its characters descend on a single location, however, might be the closest thing to a sure bet in 2021. Whether at an overseas wedding or a family yacht parked in the ocean, Succession is often at its best when observing every chaotic element of the Roy family is smashing into each other, seizing on the opportunity to build tension with a boldness most of television lacks the confidence to deliver. “Retired Janitors of Idaho”, set against the backdrop of the 46th Waystar Royco Annual Shareholder Conference, is most assuredly one of those signature episodes of the series, a Tabasco suppository of drama that begins to crystallize where season three is heading in rapturous fashion.

The genius of “Retired Janitors of Idaho” lies in its dramatic crescendo, deploying a series of narrative complications that helps to build the proper amount of tension around the fate of the company – an element that seems fairly obvious to account for, but is pretty difficult when considering how amorphous concepts of corporate maneuvering might be to the average viewer. “Retired Janitors of Idaho” is able to effectively convey the dire nature of the situation, by simply setting a ring of fire around the event itself (which is mostly just Frank vamping on stage) to provide intriguing entryways into an extremely consequential moment for the series.

The Roy family apparatus often talks in dire phrases about what every single business decision means for the company; however, “Retired Janitors of Idaho” is actually one of those moments, even before everything starts to go haywire. Where it opens – with Logan recovering from the incident of “Lion in the Meadow”, on the back of his and Kendall’s failed attempt to shore up support – is interesting enough; once it becomes clear that the incapacitated patriarchs of the warring families weren’t going to budge, however, “Retired Janitors of Idaho” gets a lot more interesting.

Humans, by nature, are fascinating with viewing depictions of survival; often, those are stakes simply established by putting characters into actual life or death situations. On Succession, however, survival takes on completely different forms, with the same function – watching humanity and society break down as our preternatural, self-serving instincts kick into high gear. Succession is a series obsessed with watching the wealthy (and those they put under their boots) scramble; when the DOJ, the President, and the fate of an $85 billion company are on the line, it’s hard to set much higher stakes to examine the Roy children under.

To its credit, “Retired Janitors of Idaho” is doggedly focused on this mission, using the existing characterizations of its protagonists to further draw out the episode’s dramatic tension. Without Logan’s voice in the room (having gone “piss mad”, due to UTI-related delusion), there’s nobody at all in Waystar to make decisions – which leads the Roy children to familiar places. Connor picks an inopportune time to bargain for himself, Roman goes into “protect Daddy” mode, and Kendall and Shiv take their individual approaches to self-preservation, which is usually a mix of groveling, gambling, and self-righteous assertion of what’s right and wrong.

I really love how “Retired Janitors of Idaho” utilizes each of the Roy and Furness octogenerians (who are both sidelined and mostly voiceless at the most important juncture) to examine what their children have gleaned from them in their lifetimes. Gerri is correct when she says Roman is a good bootleg Logan (for a phone call with the fucking President, as big a gamble as anything that happens in this episode), but all of the privileged children in this series are direct correlations of their parents.

Even our brief introduction to Sandi (yay, Hope Davis is here!) fits the bill; look no further than when Shiv pulls her aside for some last-minute deal making, and Sandi’s eyes light up when she’s given a fourth seat and the humiliation of taking the Roy’s private jets (ahem, ‘PJs’) away as part of the deal to stave off a shareholder vote. Shiv, thinking she’s smart by securing herself a stronger position, thinks she’s making a great deal she can show off to Daddy – Sandi’s telling smile is this week’s great sign of Shiv’s Blind Choices, which she is rewarded for by getting screamed at by Logan in front of everyone (oh yeah, and Tom’s trying to knock her up before he goes to prison).

“Retired Janitors of Idaho” is an engrossing look inside a pressure cooker – it’s also a terrific example of disciplined scriptwriting, each block of story and dialogue lending towards building tension towards the third act (even our one seemingly unrelated scene, where Ewan tells Greg he’s donating his inheritance to Greenpeace), all dripping with the implied consequences that come with making choices. Everybody in the Roy family is used to having it all without having to make concessions, and in recent weeks, nothings come up aces for them; hell, their attempt to put some pressure on the President led him to absolutely fold, dropping out of the race and leaving the Roy family without the most powerful political lever on the world to lean on.

And yet, Waystar Royco continues on; thanks to Shiv’s shrewd negotiations (also an apt description of her suggestion that they should pump Logan full of adrenaline and push him out on stage for good optics) and Gerri’s ability to barely keep everything together, the company sneaks by on a taint hair to live for another day. It comes, of course, at the cost of security; with more uncontrollable seats on the board, and a possibly empowered DOJ bearing down on the company, Shiv’s decision definitely mortgaged some of the future to maintain the present – which, considering how desperate she is to keep it together for her own ends, gives important context to the tunnel vision with which each character views the situation.

With “Retired Janitors of Idaho”, Succession can confidentially say it is the best drama on TV right now. It’s probably been true for a bit, sure, but the conviction of these last two episodes really set it against a lot of its mediocre, cowardly counterparts. Untethered from the ADHD of streaming services, and the limitations exhaustively placed on previously-existing IP, Succession almost feels like a throwback to prestige TV of five to ten years ago, with a confidence that is bold, aggressive and infectious, often as funny as it is insightful about the petty selfishness of the human condition, set against the backdrop of the slowly-crumbling beacon of late-capitalism that is Waystar Royco. Succession is very much a show of the moment, a designation I hesitate to ascribe to any good television show: surprisingly, Succession has risen to the occasion in season three, embracing its position in the cultural conversation – and reveling in it, proving that all those months off-air were worth the wait.