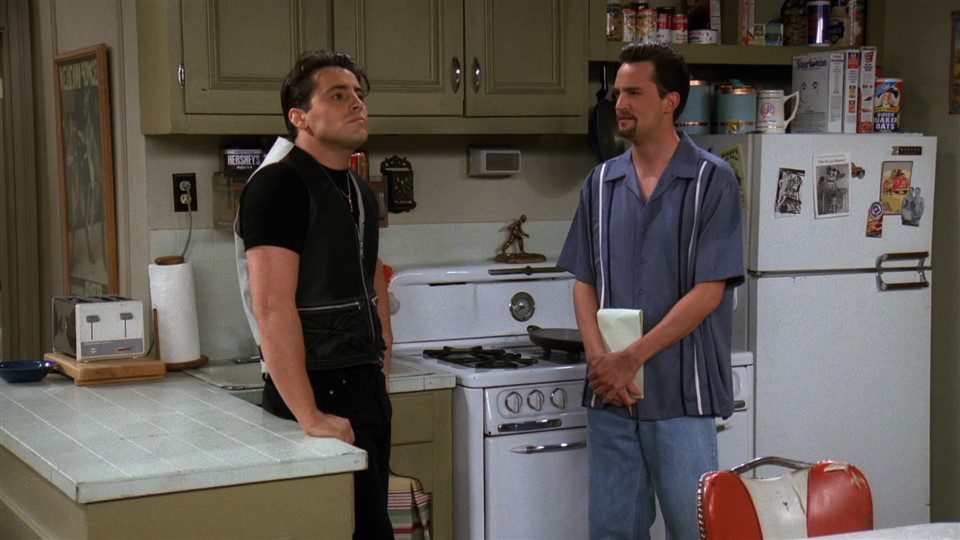 Friends‘ relationship with its own past is a tenuous one, a show capable of delivering an episode like “The One with the Prom Video”, and later, monstrosities like “The One That Could’ve Been”. Early in the series, it proves fertile ground for Friends‘ rather extensive worldbuilding, like Rachel’s original nose and Ross’s marriage (or, more unpleasantly, Fat Monica); later in the series, it would be an area for Friends to lazily retread the same jokes, often at the cost of its own characters and their younger selves – a strange move for a show that ostensibly loves its protagonists.

“The One with the Flashback” falls somewhere in between the best and worst of Friends flashbacks; its proximity to the reality of Friends we were introduced to in “The Pilot” certainly helps, as it doesn’t feature any of the prosthetics Friends would often rely on for humor in its more 80’s-centric sequences. And it offers an interesting premise: Janice prodding the group on whether any of them had come close to sleeping with each other before. To this point, the only sexual chemistry Friends had explicitly expressed was between Ross and Rachel, obviously, so Janice’s proposition offers an interesting gateway for the writers to explore the Central Perk Six in an undefined time (between senior year of high school and 1994), while also presenting a tantalizing alternate universe where Friends was a show about a friendly orgy.

Ok, maybe “The One with the Flashback” doesn’t go that far, but the idea of romantic entanglements developing within groups of close knit friends is an age-old one that Friends explicitly avoids with most of its characters week to week (no, we are not going to talk about the whole Joey/Rachel arc). Sure, Phoebe and Joey flirt a little here and there, but Ross’s decade-long crush is literally the only bit of romantic connection between the group at the outset – which, considering how attractive they all are, is impossibly hard to believe.

In that sense, “The One with the Flashback” makes a lot of sense for Friends, as a way to extinguish any potential noise around chemistry between cast members. It also allows the writers to use the episode as a playground of sorts, a no-stakes environment where they can test out these various pairings, disguising their creative curiosity around humorous nods towards established character traits. In that sense, the cross-stitches of the pairings in “The One with the Flashback” makes for really interesting material.

Inspired by Janice prying the group about their shared pasts at Central Perk, “The One with the Flashback” takes place in 1993, one year before “The Pilot” – an explicit choice to allow to act as a hypothetical prologue, rather than a twin pairing to the high school flashbacks of “The One with the Prom Video” and other episodes. “TOW the Flashback” needs to exist in the early 20’s of its characters, a time where they’re more used to hanging out at a bar, taking romantic risks, and coming face to face with the realities of adult life. Setting the episode here not only gives it a comfortable proximity to “The Pilot”, the audience’s establishing point with these characters, but it also takes place where its characters live a bit more freely, and are allowed to.

Since Ross and Rachel don’t interact in this episode, the real love story teased in “The One with the Flashback” is of Joey and Chandler, telling the story of how they ended up being roommates. Again, there really any stakes here given we know the ending, but it answers the question of how a neurotic office dude could’ve ended up such close friends with an airheaded (and very broke) actor – and does so in humorous fashion, as Mr. Heckles scares off Chandler’s initial choice for a roommate (a photographer with a porn star sister) and leaves Chandler desperately taking in Joey.

The other love story teased, strangely enough, is Monica and Chandler; given the writers had no idea they’d put them together at this point, the True Couple of Friends are only given a moment of tension, because this episode offers every possible avenue of heterosexual tension available to it (except Joey and Phoebe, because… well, I mean c’mon). But their moment, especially with the few extra seconds it is given in the extended version, is surprisingly tender: Chandler gently hugging Monica while she’s in a towel, reminding her that she’s a wonderful person who is more than deserving of someone’s love.

It’s an extremely palpable moment, one that feels lot more tactile than the Joey/Monica and Ross/Phoebe pairings bookending the episodes; those are fleeting moments of attraction, awkward and easily extinguished in a way most intersex friendships have at some point in time. In reality, those moments don’t involve making out on pool tables (or in Joey’s case, exposing himself to Monica within two minutes of meeting her); but that idea, that moment where you suddenly see an attractive friend from an angle you’ve never considered before and let your mind wander, is a relatable one, and how Friends pushes each pairing into those positions makes perfect sense.

But holy shit, the Monica/Chandler moment works – and even without the hindsight of knowing how the show’s story would play out. The writers, whether consciously or not, can feel it, too: none of the other scenes teasing possible alternate realities last longer than a few seconds before they push into a joke, or cut away to another scene. Save for an awkwardly-edited cutaway to Ross, Chandler and Monica’s embrace in her hallway is kinetic in a way Friends often isn’t, even when it is trying to be romantic.

It’s a powerful moment, and one that deafens most of the rest of “The One with the Flashback” – which is fun, if mostly unremarkable in its delivery. Perhaps the strangest part of the episode is how it just ends; just as soon as Friends brings its dystopian pairings to the blue balls-ian edge, it backs away and ends, killing any momentum immediately in its tracks. It’s a strange choice, one that almost feels like it was scripted as an longer episode with the third act cut out; just when it is getting interesting and asking the hard questions about its characters (and their levels of horniness for each other), it backs away, almost as if it’s afraid to hear its own answer – or worse, tease its audience into a frenzy of harassment for stories they weren’t interesting in pursuing.

As a whole, it makes for an interesting experiment; it is not one with a particularly strong emotional pull, however, given how quickly it ejects itself from its most challenging moments. It leaves the audience begging for more, to see how these characters would react and recover their relationships in the wake of such moments; Friends is neither interested in the conversation, or any farcical fun to be had around it, which ultimately limits the impact it can have in illuminating the characters we know in interesting ways (as fun as it is to watch Phoebe pretend she’s still living in Monica’s apartment, it is not a story with any kind of dramatic traction).

However, it is the rare episode of Friends that flashes back to the past without a bunch of gaudy, borderline offensive prosthetics; instead, “The One with the Flashback” relies on some really phenomenal costuming to set back the clock, and throws its characters into a petri dish, one lacking in the kind of dramatic (or comedic) gravitas one might expect from the moment. The lack of that oomph isn’t a disappointment, however; “The One with the Flashback” is a fun thought experiment offering a glimpse of the crew at a different, more vulnerable point in their lives – and doesn’t need to be anything else than that.

Up next: The Mattress King appears, and Joey hits a new low in “The One with the Race Car Bed”.