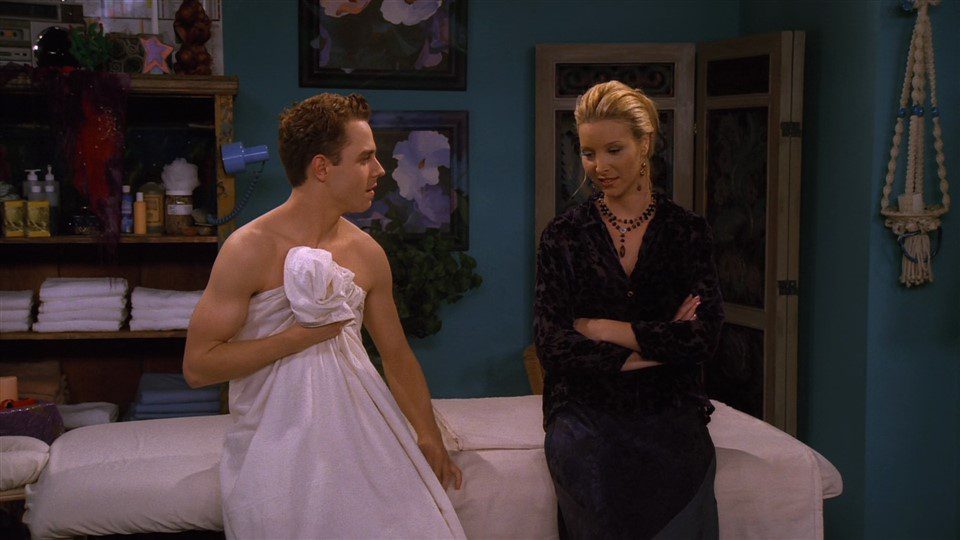 Frank Jr. is a vexing presence on Friends; like many recurring characters, the tendency of Friends writers to lean heavily on repetitive jokes as character traits often makes for disappointing returns. In a lot of ways, Frank Jr. is similar to Janice in early seasons; while they often provide fascinating avenues into exploring the protagonists they’re entangled with, a resistance to growth sometimes limits the ability to land the largest emotional beats. “The One with Frank Jr.”, the second appearance of Phoebe’s half-brother (following “The One with the Bullies”… unless you count his unexplained cameo in “The One with the Baby on the Bus”), fits perfectly into this mold – in the few moments when it moves away from the character’s immaturity, it briefly taps into some insanely potent material, that which Phoebe only experiences a few times throughout the series.

Structurally speaking, Frank Jr.’s visit to New York isn’t really a traditional primary story; there’s a strange weightlessness to “The One with Frank Jr.” as it meanders between its running stories. None of them are tangentially connected; Ross’s sex list and Joey’s entertainment center feel like two C stories given a lot of extra comedic space, almost to fill in the voids around the opening acts of Phoebe’s story. It makes for a weird cadence, especially when it employs an extended farce to build to its biggest emotional moment; it is off-kilter in a way I appreciate, even if it’s not a particularly effective mix.

Sometimes, a hangout comedy can just hang out; and for eighty percent of “The One with Frank Jr.”, we’re straight fucking chillin’. When the stakes are “how much can Joey fuck up a construction project” and “which celebrities does Ross want to fuck”, there’s really no way to elevate the stakes to something meaningful. However, for an episode that exists mostly for a few visual gags and a very 90’s cameo by Isabella Rossellini (it’s canon that Ross is a David Lynch fan, by the way; how does that make you feel), “The One with Frank Jr.” mostly just coasts along with the confident hum of a sitcom just flexing its muscles.

It leads to a lot of fun, if completely unmemorable, character interplay; Friends is always better when it incorporates more than two of its main characters in a scene – “The One with Frank Jr.” knows this, and makes silly stories about Monica’s bathroom floor and Ross’s love of lamination more watchable and nimble, than they seem on paper. Credit where credit is due; there’s a whole lot of nothing going on in “The One with Frank Jr.”, and its a reminder of how integral cast chemistry is to a long-running series, one expected to pump out ratings gold 25 times a year. To find that kind of lasting, watchable consistency, plots like “Joey does bad contractor work in tight pants” have to be able to work, even if they are inherently uninteresting stories.

Of course, all the chemistry in the world means nothing when Friends is at its laziest or most reductive; “The One with Frank Jr” avoids this with some small touches that give the episode a bit of unique texture. Outdoor shots, a lot of pop culture references (something Friends and its generation did far less than today’s comedies), and a lot of room for physical bits – led by the hilarious reveal of Joey’s completed entertainment center, a laughably large contraption only bested by the reveal of Monica actually thinking the checkered nightmare of a bathroom floor looks good (seriously – I am insane to think that looks dreadful?). These bits work; there’s an energy to it all that, while a lot of it is as memorable as Ross’ combination of corduroy pants and white tube socks, keeps an otherwise meaningless episode from drowning in either celebrity navel-gazing… or even worse, start relying on gender-related tropes or lean into some of its occasional problematic streak.

Thankfully, “The One with Frank Jr.” plays it relatively safe (for an episode with a teenage pyro, of course); this allows Phoebe’s story to blossom in the third act, undisturbed by other stories or runners. For three-quarters of the episode, Phoebe and Frank’s interactions don’t really have much to offer; Phoebe is making an effort to understand her half-brother, but it all reaches a breaking point when he fondles her colleague, thinking his massage was a massage (the kind that makes Chandler ponder whether they take New York for granted). In a second, Friends snaps its fingers, and suddenly becomes this quiet conversation between two siblings trying to find a common ground for each other.

Just because they share parents, doesn’t mean they share anything else; though that awkwardness can be played for jokes, it also speaks to the earnest attempts Phoebe is starting to make to find a place for family in her life. For a character with her life story, that’s an important step in her maturity – but one that Friends only would occasionally recognize through the years, often falling back on using her as an element for low-brow humor about airheads. When it does, like her extended arc in season four, Friends taps into Lisa Kudrow’s abilities as a performer and delivers some of the show’s best emotional beats; the reconciliation in “The One with Frank Jr.” doesn’t exactly reach that threshold of memorable – but that doesn’t discount the power of their vulnerability in that moment, one that allows both Kudrow and Giovanni Ribisi to breathe life into their often-overlooked characters.

In the larger scheme of Friends‘ third season, “The One with Frank Jr.” is rather insignificant; one could argue the most important reveal is hidden in the final pre-credits joke, when Chandler locks Joey in his new contraption (and in the process, teasing one of the show’s great running visual gags to come in season four). When that’s the biggest thing happening in your episode, it’s clear “The One with Frank Jr.” is mostly just trying to take up 22 minutes of a 550-minute long marathon; and at that, it’s a perfectly serviceable, if unremarkable, episode of Friends.

Up next: Friends takes another interesting trip into the past in “The One with the Flashback”.

(here’s that laminated card, for reference)