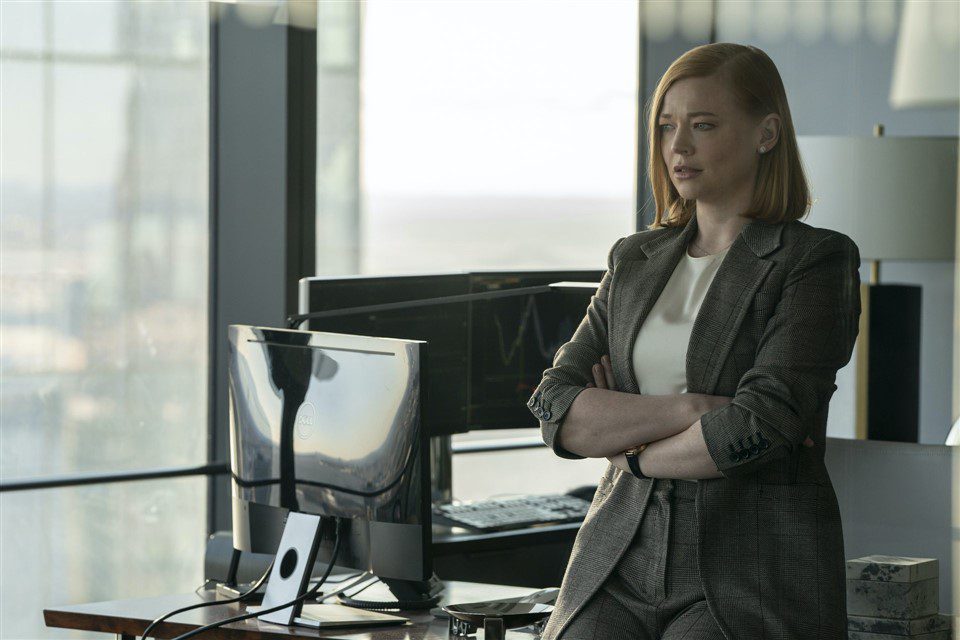 There’s a moment in “The Disruption” where it all almost crystallizes for Shiv… as Kendall struts around the city and Logan recoils, Shiv has a moment of pause when Tom timidly announces he’ll throw himself on the proverbial grenade fo the family. As he prattles on about the sacrifice he’s “willing” to make, Shiv mentions that everyone is “doing somersaults” for her father, in perhaps her character’s most beautifully moment of near clarity. After all, it would only be a matter of hours before she was releasing a scathing open letter about Kendall to the public, in her own attempt to appeal to Logan’s infinitesimally small “better” half – which not only provides a wonderful dramatic domino effect, but also a definitive sign Succession‘s third season is starting to find its stride.

The irony of Shiv’s offhanded comment is but one of many great moments in “The Disruption”, an episode as chaotic as “Mass in Time of War” was static, moving with purpose between the many players orbiting (and inhabiting) the Waystar castle. And as Logan tries to draw the moats and hold them closed against the Department of Justice, Succession moves nimbly through a series of fascinating observations testing the hubris of its main characters. We already know Logan’s self-righteousness and Todd’s sacklessness, setting the two ends of this spectrum; where Succession‘s third episode really has fun is in the muddled middle, as the Roy siblings continue to find new ways to redefine dysfunctional family relationships.

Mostly, this turns into a pissing contest between Shiv and Kendall, one Connor and Roman are happy to stand on the sidelines of; which makes sense, given how both clearly feel a little bit betrayed by the other, with Shiv standing in for Kendall as the substitute Chosen One as Kendall bitterly douses the entire company in cruise ship fuel. The only difference between the two of them is Shiv’s reflexive self-defensiveness; Kendall’s willingness to publicly immolate himself for the sake of just staying in the conversation (as people like Dave Chappelle continue to prove daily, no coverage is really bad coverage when you’re mega rich) stands in stark contrast to her attempt at a buttoned-up townhall meeting – even though Shiv may be the only one who gets it, she’s still just as willing to stand in front of the oncoming train for Logan as anyone else, in the name of power and money.

The parallels “The Disruption” finds between elements like Shiv and Kendall’s desperation, or Roman and Kendall’s fumbling attempts to seem vaguely qualified for anything they talk about, marks a strong return to Succession‘s best head space, after a couple episodes of what I’d kindly call wonderfully theatrical thumb-twiddling. Especially in the episode’s second half; once Kendall sabotages Shiv’s town hall (by playing Nirvana’s “Rape Me” over a Bluetooth speaker), “THe Disruption” really starts to move, pushing Shiv to take horribly affirmative action, just as the FBI shows up at Logan’s doorsteps and reminds him that there are still people in the world wielding more power than him (turns out, even having the president’s daughter working for your network is a pressure point with limits).

Even more interesting, however, is where Succession is drawing thematic lines between characters. Using Kendall’s assessment of social media discourse as a backdrop, “The Disruption” examines the difference between the bold actions of Kendall, Logan and Shiv against the more measured, careful approaches of Roman and Greg. On some level, boldness is recognized as powerful among the elite, even if it is more a mere suggestion of power than something coherent. The idea of being aggressive is not just something Kendall jerks off to in the shower; the mere show of power is something that is ultimately rewarded, a social capital Kendall can spend, that the likes of Roman, in their hesitations, can’t aspire to (Tom wants to, but… as much as Shiv kind of loves the idea, knows it is a disaster waiting to happen).

That idea reaches towards Succession‘s stronger notions as a satire, and its critique of the intersection of media, politics, and entertainment that turns everything into a shitshow of lawyers and angry old white man grasping onto every semblance of power they can exercise. Notice how brilliantly Logan is written as he is increasingly painted into a corner of his corporate fortress; he lashes out at Roman and Gerri, screaming about shoving Montblanc’s in his son’s mouth, perhaps the most lavish, indulgent possible way someone could imaginably inflict violence on someone. Of course, I fully believe Logan would punch Kendall if he showed up and tried to do a diss freestyle – this is the guy who pissed in Kendall’s office to make a point, after all, a visual I’m sure Kendall plays over and over in his head.

With its head on a swivel, “The Disruption” is the first episode of season three fully existing in Succession‘s new reality, allowing it to move in a way the previous episodes could not. It ends with Kendall fully Jokerfied and Logan reluctantly opening the kingdom to the FBI, as fascinating a setting of the stage one could hope for (also there’s the brief mention of some Israeli machine learning company, which is an interesting bit I hope we return to). Only one thing is clear; there are absolutely no winners to be had here, no good side to cheer for or strangely project oneself onto – these assholes are ready to put each other in front of the Times New Roman firing squads, and I’m here for all the awful glory it looks to provide.