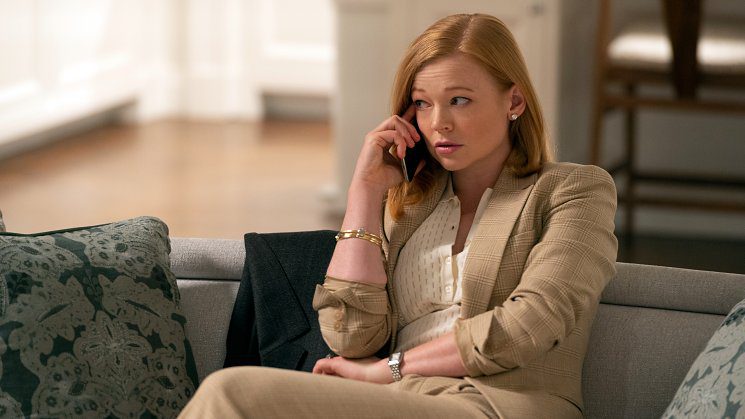 It’s interesting to consider both “Secession” and “Mass in Time of War” and how they act as a decrescendo to the dramatic ending of Succession‘s second season. Though these opening hours have certainly had a lot of movement, both physically and emotionally, “Mass in Time of War” ends by revealing it all to be nothing more than some noisy friction, a way to keep the emotional roller coaster moving as the show began to arrange its pieces on the table for season three. It’s certainly entertaining to watch – but by the end of “Mass in Time of War”, it certainly feels like high time for Succession to kick itself in the ass a little bit and get moving.

The bifurcation of the show’s narrative is a great disguise for how little is actually happening; as the proxy war plays out within Waystar and the Roy family, Succession is trying to maintain momentum, even as the protagonists of its core conflict are separated by thousands of miles, and multiple phone-wielding assistants. It took us an hour to get to Gerri as CEO, and this episode takes an equally long time to make an obvious point; Kendall is alone in his self-righteous quest to take down his Bad Man Father, and the other Roy children are happy to play both sides of the fence until they figure out their own path to power.

“Mass in Time of War” is really about the bottle episode shoved into the middle half hour; save for a couple asides to remind the audience that Marcia still exists and is definitely going to break herself off some more of Logan’s fortune (you better know she’s getting on the trust she’s wanted since season one), “Mass in Time of War” is considered with nothing except closing off the unholy trilogy of episodes that began on the Roy family yacht. To accomplish this, “Mass” sees Kendall arranging to have everyone meet at his ex-wife’s house to lay out his totally well thought-out plan; to “leap frog Amazon” because “information will be more valuable than water in the next 100” – and oh yeah, because Logan told his prodigal son to his face he would send him to prison to save his own ass.

Once all four siblings are in the house, Kendall quickly begins moving through his usual sales pitch; the apologizing, self-deprecation – and most importantly, the sanctimonious sales speak, going off about changing paradigms and setting up the company for the next 100 years, through a bunch of vague business ideas that are definitely not the byproduct of a guy ignoring his lawyers at the last minute and blabbing off his mouth at a press conference.

It makes for a number of fascinating exchanges, as Roman and Shiv try to poke and prod at Kendall’s reasoning and tactics, even as the little voice inside their heads is clearly screaming he’s right. Of course, Kendall’s not entirely correct – his notions of being on a righteous journey to save the country, of course, are wildly overblown and masturbatory; but when Kendall starts turning the screws on his siblings, we can see the high-risk wire act that made Kendall such a powerful presence within his own family. His ability to react, think on his feet, spit out corporate word salads on a moment’s notice… it is all very impressive, until everyone realizes that yes, this really is just about Kendall trying to punch his dad in the dick.

But from there, “Mass in Time of War” doesn’t have much to fuel itself beyond implied intrigue; which even then is limited, as Shiv’s non-committal tone and Roman’s repeated assertions that he’s on Logan’s side make it clear early on Kendall can’t sway them. Give Jesse Armstrong’s script credit; it tries really hard to convince us that Shiv and Roman are leaning towards taking out their father (nobody cares about Connor), even though Kendall’s second act shift into self-prophesizing makes the inevitable ending quite obvious.

Now, it’s still a pleasure to watch Kendall realize he’s wasted his time and throw a rich boy hissy fit, but I couldn’t help but feel like “Mass in Time of War” was riding out the clock for an hour, trying a little too hard to convince the audience of a flimsy proposal we knew wasn’t going to last. There’s just enough side eyes from Shiv and just enough moments of consideration from Roman – but the second Kendall started talking and their eyes glazed over, Succession strangely betrayed the conflict it was still in the middle of setting up, instead falling back on established dynamics and alliances, all of which are begging for some new, interesting reveal.

Ineffective construction aside, it’s still a pleasure to see this family lie to each other, withhold information until it is convenient (Shiv and Tom’s relationship grows more dysfunctional with each call), and try to four-dimensional chess each other into oblivion. Only Gerri is keeping it simple (no surprise she’s in the driver’s seat), the one character who truly abides by Kendall’s “no bullshit” rule he unconvincingly assuages his siblings to abide by. Succession‘s writers are great at poking the various blemishes and wrinkles each character wants to keep under the ol’ Stetson (to borrow Tom’s turn of phrase), and exploring that web is much of the show’s week to week joy.

But Succession is also at its best when it feels like it is moving forward; and through two episodes of season three, it still feels a bit like a show riding the coattails of its last great twist. Of course, some of what is happening now is building to that next big twist; but after two of the season’s nine hours, that inertia is a bit hard to ignore when it feels like nothing new is being added. Greg is being used as a pawn by his grandfather (to fling political lawsuits at the Waystar empire?), Kendall is so far up his own ass he can’t see ten feet in front of him, and Marcia is being a financial opportunist… “Mass in Time of War” often finds itself existing in familiar emotional palettes, without adding any intrigue unique to its own events.

Mostly, it feels like more table setting; as alliances are hardened and a mélange of variables are enacted on those relationships, there is an obvious path for Succession to deliver the memorable season I think we’re all expecting of it. But I can’t help feeling like “Mass in Time of War” mostly spends its running time waving its arms to distract the audience between larger scene changes, with a few Greg comic relief bits thrown in between (it helps that Logan is back on domestic ground by the end of the episode – while the dual storyline approach works, Logan’s extreme proximity to the actual events of the series wasn’t going to work long-term).

As the war heats up and more characters appear (hi Hope Davis!), Succession clearly has a game plan; and after its first two seasons, it has certainly earned some audience faith that it is building its story intentionally. However, how much “Mass” adheres to the usual Succession formula, at least narratively, betrays the dramatic notes it tries to hit; it’s not hard to see where “Mass in Time of War” eventually lands with the Roy siblings, especially once Logan makes his presence known, in the form of a box of donuts Roman says, with 98% conviction, are free of poison. With Logan back and Kendall angry and alone, it finally feels like the stage for Succession is set; as Kendall notes, this is all a side bar, and now that it’s done we can finally start to get to the good shit.