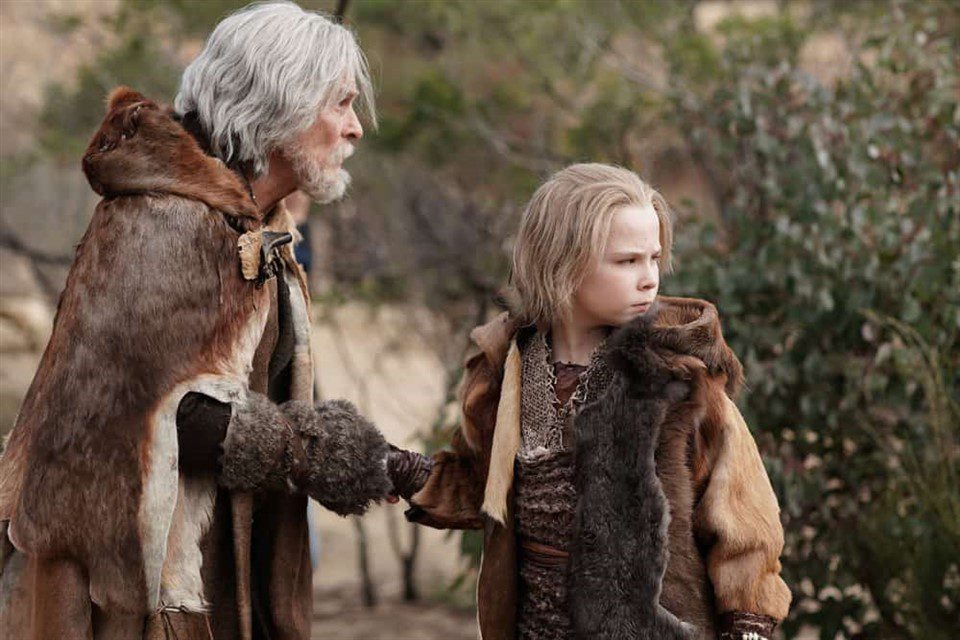 For weeks, I have all but begged La Brea to do something to light a fire under its ass; its plodding through genre tropes and carbon copies of LOST plots has been astonishingly boring, for a series NBC spent millions shoving down our throats during the Summer Olympics – and one they just announced a second season renewal of, no less. For better or worse, “Origins” answers my prayers, delivering a hilarious doozy of a plot twist in its final two minutes, a narrative decision so reckless and unearned…. that I might be back on board with the show?

If “Origins” was nothing but the last forty seconds, I would absolutely be on board; the first 40 minutes of the episode could be summed up in a single sentence I would fall asleep halfway through. To say “Origins” stumbles through its convoluted introduction of the island tribe is an understatement; from the unclear power structure to the overly complicated obfuscation of who Silas the Grumpy really is, the most of this episode suffers from the same rote scene construction each episode has struggled with.

A lot of “Origins” is just sprinklings of world building, to fill in the details around the final reveal; after weeks of baby crawling towards minor plot developments, there’s a sudden acceleration of the half-baked ideas La Brea‘s been passing off as huge narrative shifts recently. Of course, it all begins in a thoroughly illogical place, with our survivors suddenly deciding its a good idea to barge into the survivor’s camp and make peace with the people picking them off and knocking them out (well, you know – Ty had that Meaningful Experience during last week’s limp storm, so all should be good, right?).

But who gives a shit, right? La Brea‘s not really a show about establishing its dramatic stakes and delivering on them; it’s about CGI animals and teasing ridiculously big science fiction plots, that it awkwardly wields like a clumsy hammer. It’s all about the quick fix – instead of narrative breadcrumbs, La Brea wants to give the audience narrative cocaine – but what its pushing on the audience is watered-down, cut nonsense, with only the ability to offer a short, superficial high of enjoying its occasionally galaxy-brained moments of goofiness.

Which, boy, does “Origins” finally deliver on; once we get past all the bullshit talking and exposition delivered by Paara (Ty’s buddy), “Origins” realizes there are only two episodes left in its brief first season, and decides to pour gasoline over everything – or to be more accurate, delivers a massive hit of laughing gas to the audience. It’s almost impressive, how many plot threads it is able to bring together in its Big Moment – and even though it is ridiculous and unearned, and is mostly certainly not something La Brea will be able to handle, I have to admit I couldn’t help but enjoy a nice laugh when it happened.

I’m talking, of course, of Gavin realizing that he is the little blond child (named “Isiah”) who has been hanging out with Eve, Levi and the survivors all episode (and occasionally stalking them from the woods since the pilot, apparently). La Brea‘s been teasing Gavin’s visions as psychic – and as he is constantly seeing Eve and Levi get snuggly with each other, it seemed extremely convenient how his “powers” were operating. Instead, those visions are Gavin’s memories – which, is a plot thread so thoroughly silly I have to appreciate it.

With one flash of the pen, La Brea has suddenly reshaped its entire season into some weird, convoluted series about time travel paradoxes; Gavin is an orphan displaced in history, taken through some Time Gash on November 16th, 1988 (well played, La Brea) and dropped into the modern world, for reasons I’m sure are completely logical and illuminating (duh). I had to stand up and applaud; there are taking big swings and there is just blindly flailing around in the dark with a rocket launher, and Gavin’s reveal is definitely one of those latter moments, one that is so thoroughly out of left field I’m genuinely intrigued to see how it is utilized (also, there are only two episodes left, so… shit better happen quick!).

What does it all mean? La Brea runs away from its big moment so quickly, it’s hard to tell what it even thinks it means, especially in regards to our mop-headed patriarch. But time travel is often a bad idea for a television series – and one only eight episodes in, with so little established, it makes even less sense to introduce these kinds of temporal curiosities into your narrative. As we’ve all learned a billion times in the past decade, Gavin’s presence in two different time periods at the same time is a paradox; one’s actions seemingly affect another, which means if he dies or Eve interferes with his child self, then the entire timeline could change (*cough* LOST *cough*). But if he’s already in the present, experiencing the memories of his past as they are forming… I mean, I could start to consider the questions, or we could just appreciate how overly ambitious this is, briefly consider the dozens of ways this could be an absolute shit show, and move on.

Unfortunately, there’s not a lot else to move onto, unless you want to talk about Josh kissing in the woods, Veronica having a panic attack, or Dr. Sam randomly revealing that he’s out of his PTSD medicine – which La Brea suggests means a fascistic monster is about to be unhinged, an altogether weird way of presenting mental illness in 2021. But at this point, La Brea is putting in so much effort trying to build some semblance of momentum, that I’m willing to forgive how reckless this entire plot is – and instead, admonish it for being the embarrassingly thin portrayal of a father/daughter relationship that it is (which is supposed to parallel the other daddy/daughter relationships on the show, none of which are really compelling at this point).

For better or worse, “Origins” relies entirely on its big narrative shift to kickstart the series to life; while this does absolutely nothing to make Gavin’s kids or anyone else more watchable, seeing how the show uses this conflict as an avenue to more solidly define him could be interesting (would certainly be better than more scenes of Izzy furrowing her eyebrow and asking idiotic questions, which I swear is happening twice an episode at this point). As an avenue into some potentially goofy ass science fiction plot lines, I’m also willing to accept this chaotic 11th-hour development; at the very least, it is La Brea pushing itself to do something to define itself in some way, which is a lot more interesting than 90% of what’s been offered in these first eight hours.

“Origins” is not good TV, of course: the utter lack of rewarding characters or genuinely intriguing plot developments makes so much of this episode blend in with its shapeless, colorless counterparts, a series that has no sense of dramatic stakes or the rhythms of building tension effectively – like the weather through the Time Gash, everything is just fucking random, mistaking ingenuity and honesty for pedantic predictability. And yet, it takes some serious confidence to take such a big, unearned swing as it does at the end of this episode; time will tell whether it can pull it off, but I welcome a much dumber, more active version of this show, than what has been offered so far in its freshman season. Here’s to hoping for a loud, mindless close to the season.