Skip to content
Home » How I Met Your Father Season 1 Episode 8 Review: “The Perfect Shot” Goes for Broke In Exciting Fashion 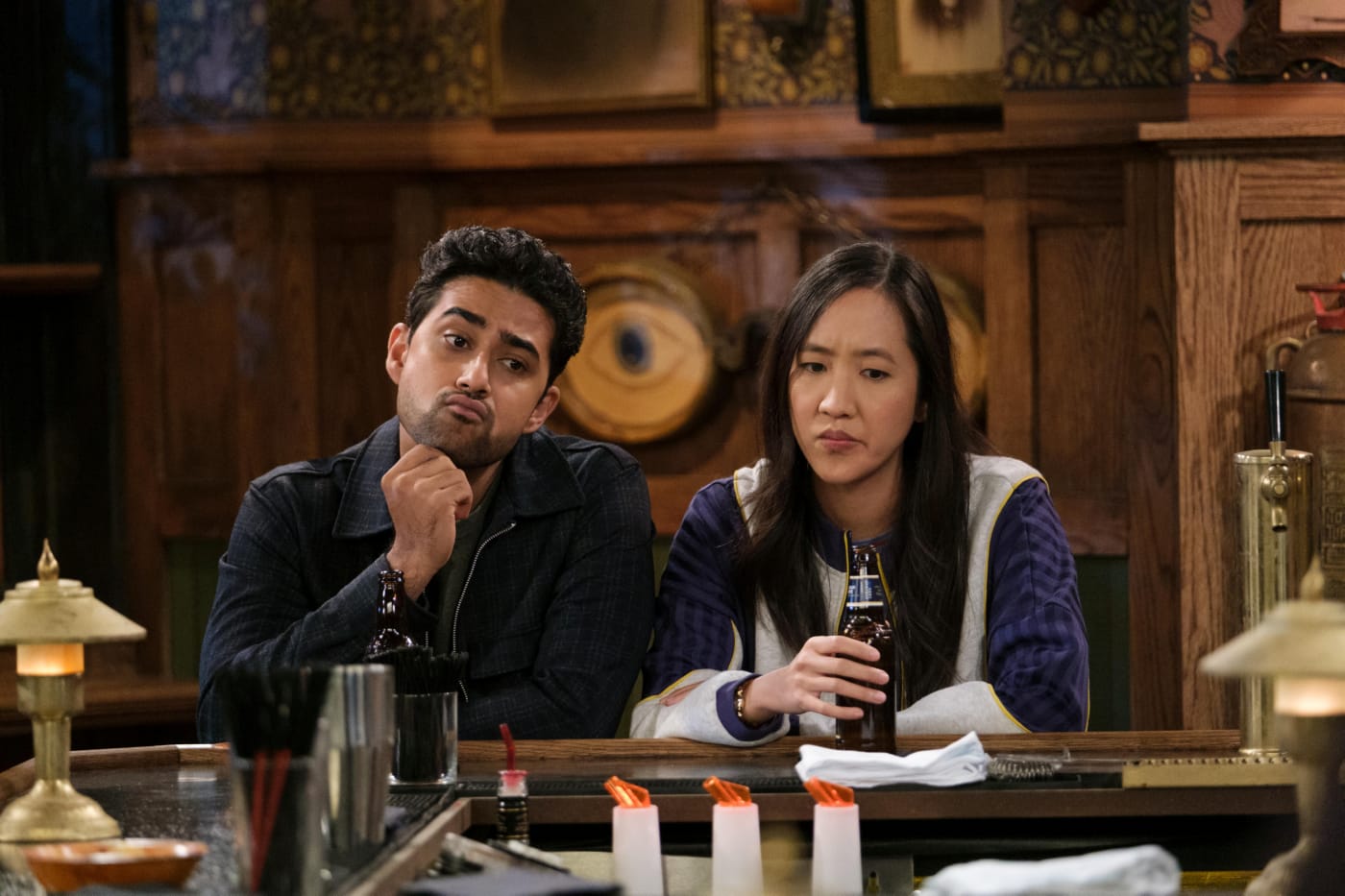 How I Met Your Father Season 1 Episode 8 Review: “The Perfect Shot” Goes for Broke In Exciting Fashion

Considering where How I Met Your Father is at the beginning of “The Perfect Shot”, the antipenultimate episode of its uneven freshman season, where it ends should absolutely not work – in fact, it could’ve been a moment that broke the young comedy, a critical exposure of the show’s stumbles in developing its characters and worldview as it pushed its two protagonists together. Against all odds, however, How I Met Your Father proves to be up to the challenge it presents itself – the precarious proposition of the episode’s Big final moments actually pays off, a crescendo that turns an intriguing (if slightly clumsy) episode of the series, into its most exciting offering yet.

How did they pull it off? The simplest answer is far away from its third act twists and turns, and what it takes to get there; it’s really as simple as the episode’s pacing, which breathes much-needed vibrance into the show’s casual delivery. A little fire under the metaphorical asses of the script (credited to producer Jeremy Roth) go a long way in setting up what’s ostensibly the busiest episode of the series, pairing off all its characters into meaningful storylines about their careers – things that have been alluded to (and briefly touched on with characters like Sid and Charlie), but never embraced as catalytic elements of an episode.

Not the case with “The Perfect Shot”; named after Sophie’s attempt to find a picture good enough to give the editor from “Rivka Rebel”, “Shot” uses Sophie’s pursuit of the perfect framing device to provide all of its characters a similar opportunity. Most obviously (slightly too obviously, in the episode’s first act), it does so through Jesse – who feels as if he’s on the edge of a creative (and emotional) breakthrough in his post-Meredith life. But what he’s supposedly embracing as an exciting moment in his career, almost feels like the last gasp at someone beat down by the churns of pursuing art in a capitalistic world – and when Drew casually reveals he’s turned down a permanent music teacher position at the school.

In a moment of casual conversation, Jesse’s arc sparks to life; to this point, How I Met Your Father hasn’t really spent a lot of time drawing distinctions between the two men vying for Sophie’s affection. But in revealing Jesse’s (perhaps misguided) attempt to pursue his artistic dreams at whatever cost, it pushes Sophie into a personality crisis of her own; does she want to continue pursuing something she loves at the cost of suffering through her life, or take the easy way out into financial security and potentially unfulfilling work (though in Jesse’s case, teaching children music has to have some emotional perks?).

That dichotomy is something anyone pursuing a career of their choosing can understand; failure, or just a lack of success, can be an absolute bitch. The tendency to always wonder if you’re making the wrong choice or setting yourself up to fail – as we’ve seen with Sid throughout points this season – is a big one, an anxiety we all feel that leads to the dual identity crises Sophie and Jesse experience throughout “The Perfect Shot”.

Even Valentina is feeling the internal pressure; frustrated with her abusive boss and a lack of opportunity in her career, she’s become disillusioned with her choices. Unfortunately, Valentina’s plot is mostly tinder for larger stories – but it is still important for it to have a connection to the episode’s larger emotional arc, disillusioning its protagonists and forcing them to consider their life from a different angle – a place, as one might expect, that can lead to any number of drastic, emotional decisions (or in Valentina’s case, lead to some very intense role-play after her and Charlie steal a Chanel bag, twice).

While this is all happening, How I Met Your Father throws another intriguing curveball into the mix, with Meredith returning to New York to “talk” to Jesse (more tell him that she’s making it big-time as a solo musician, and oh yeah her first single is about their now-viral relationship). At first, her appearance almost seems to serve Ellen and Sid’s burgeoning friendship more; their attempts to distract her so they can buy time to make a plan is a great undercurrent to the episode, adding an unknown entity into the mix at a critical juncture – that is, riiiight before the abrupt finale to this abbreviated 10-episode freshman season.

Regardless, Meredith’s appearance, limited in scope as it is, works: Meredith made a choice to believe in herself – and because of it, is succeeding professionally (but perhaps suffering personally?). More importantly, it provides a foundation for Jesse and Sophie’s internal conflicts, drawing them closer together as their underwhelming artistic pursuits reveal a faith in each other, that they’ve seemed to lack in themselves.

It’s a big ask – throughout the show’s uneven first season, it’s struggled to build up the male characters as interesting, developed personalities. Jesse, the world’s most boring person, suddenly becomes a lot more interesting when he embraces the uncertainty he’s avoided for the past few months of his life. He may fail, he may fuck up his friendship with Drew and ruin his developing connection to Jesse – but he has to try, because the cost of sitting on the sidelines is just not worth it.

In turn, it fuels the most interesting episode about Sophie since “The Good Mom” – her mother’s brief appearance pays off here, as her insecurity and genetically-built-in flight response kicks in the moment Drew reveals he thinks maybe she should find a job that more effectively pays the bills (he’s also a little mad she missed his auction because of a broken tooth, a note of bitterness that adds shades to a character right on the precipice of his final appearances, I’m afraid).

It’s definitely a moment HIMYF rushes to; though the episode’s general pacing works to its benefit, energizing characters as it moves from moment to moment, even Drew is like “whoa hey, this is kind of coming out of nowhere”. Regardless, sometimes that’s just how existential conflicts appear between people who love each other; it’s not always graceful or theatrical – sometimes its just quick and bitter, a moment that reveals fundamental faults in a relationship.

Of course, before Sophie can really wrap her head around that distressing development, she kisses Jesse – a moment that would seem undeserved, if only How I Met Your Father hadn’t been able to pull its disparate threads and missteps into a coherent idea, built around a career dilemma all post-millennial generations come to terms with at some point. But it’s one thing to give up on your own dream and become a “normie” – when the person you love has already stopped seeing you as that person, that lack of faith can be soul-crushing… and when you have the genes that come from Sophie’s mother, is not surprising it leads to a short-sighted decision to embrace Jesse.

Regardless, it all works to HIMYF‘s benefit; ultimately, what makes the episode come together is its ability to embrace a bit of messiness, to stop embracing the simple, world-confirming resolutions and push itself into an unexpected, more complex place. Whether Sophie and Jesse are making a wise decision remains to be seen; smartly, this episode does the legwork to make this a moment that not only brings its characters into the third dimension – but does so in a way that adds some complexity, even when its just doing goofy things like giving Charlie and Valentina a new reason to fuck (and unfortunately, Charlie’s vapid pop culture references, which have not improved).

A shot of energy and a dash of professional anxiety turns out to be the catalyst for How I Met Your Father to start figuring out its recipe; it still remains how it uses these moments to set itself up for a much longer second season – but pushing in some big chips early on is a surpising boon for the series, one that presents a number of exciting opportunities for HIMYF to – like its protagonists – stop compromising, and become the hilarious, poignant series it is trying to fumble its way into. Eight episodes in, HIMYF is going for it – I, for one, have my fingers crossed it will pull it off.
Grade: B+