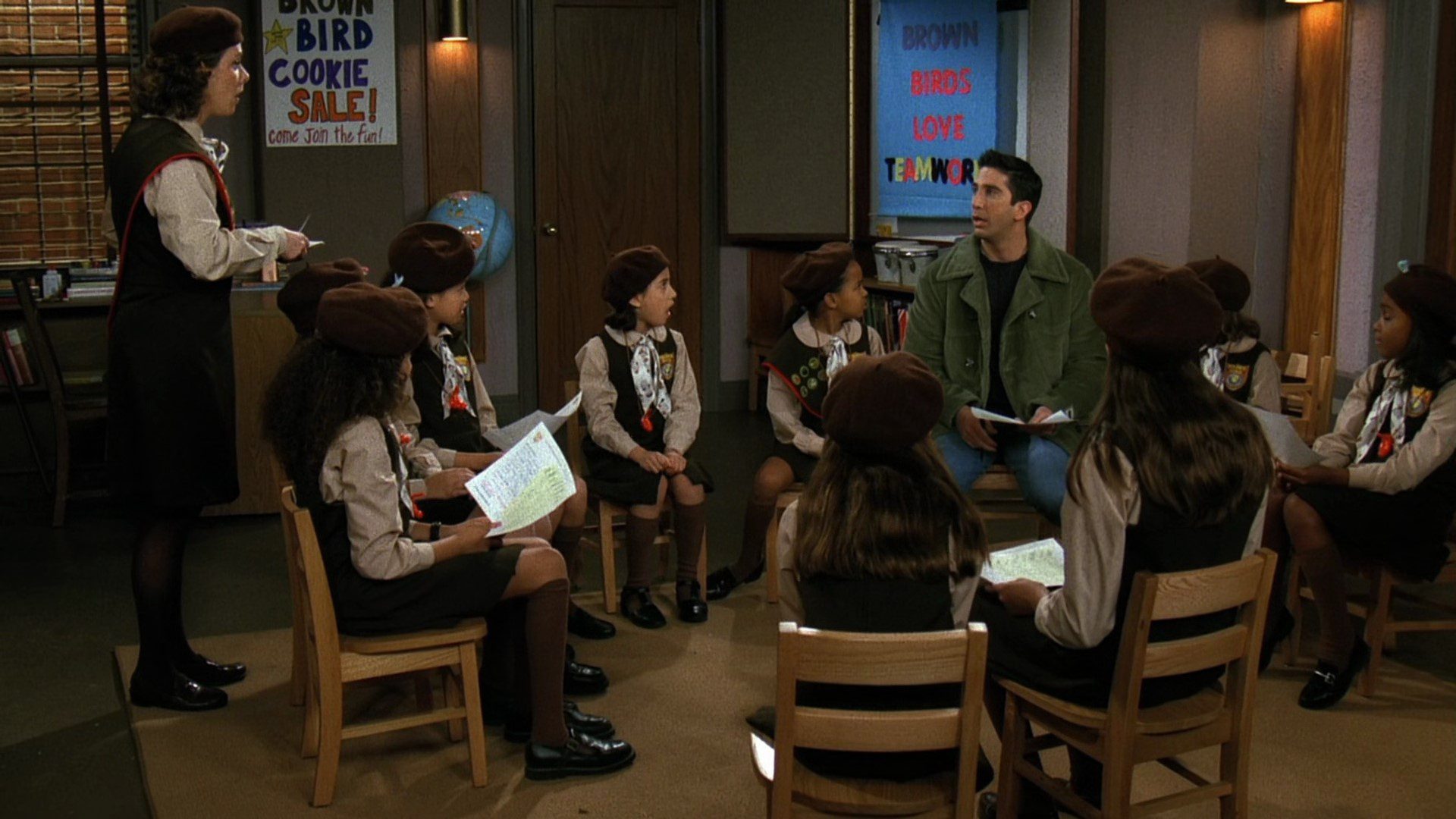 Like Friends‘ first Christmas-themed episode (season 2’s “The One with Phoebe’s Dad”), “The One Where Rachel Quits” is a very strange episode of Friends, a mish-mash of ideas and stories, none of which really find a home in what should be a very potent setting of a major city (particularly New York) during the winter holidays. Instead, “The One Where Rachel Quits” features a melange of strange one-off plots, which range from tangentially related to the seasonal setting (Phoebe’s existential pine tree crisis) to one of the odder side plots of the series (Ross accidentally breaking a child’s leg and becoming an honorary Girl Scout).

The most interesting story of the episode though, is one that has nothing to do with any of these stories, and one of the more important catalytic events of the series’ overarching plots. When Gunther’s boss forces Rachel to go through new waitress training again (for good reason, in Gunther’s defense), she realizes, like many working in food service in their 20s does, that her job is terribly unsatisfying, and offers nothing towards her actual professional goals. Problem is, as Joey smartly notes, Rachel hasn’t been pursuing her desired career in fashion since “The One with All the Poker” – and even then, that was mostly an impetus to provide some tension for the episode’s titular game night.

It was a disappointing introduction to the idea for the character – but Friends exploring professional angst would become an underrated, surprisingly consistent story premise through the series run, often leading to larger arcs providing a more engaging, dimensional understanding of each character (though, like most of the series, would see diminishing returns in later years). Through Friends‘ middle seasons, Rachel’s adventures in the fashion industry is integral to her character development: the genesis of that idea is here in “The One Where Rachel Quits”, which is quietly a major building block from separating Rachel, the iconic independent woman, from the Rachel of seasons one and two (that is, the petty and lazy nepotism child, who expected to coast through life on her rich husband’s salary).

It’s unfortunate this story has to stand alongside Ross selling Brown Bird cookies and Phoebe’s philosophic struggles with the presence of Christmas trees, because of that importance. “TOW Rachel Quits” is more a preview of what’s to come, which doesn’t necessarily feel all that satisfying in the moment – but there are signposts of stories to come, from Ross’s inability to respect Rachel’s career choices (he makes jokes about her lack of career experience and how long it’ll take her to find a job) to Rachel learning to assert her and her emotions as a human being. But perhaps its the casual delivery of this premise that makes its blossoming in later episodes so fruitful (despite having to contend with The Plot Line That Shall Not Be Named Until It Has To Be); it’s a very understated part of a busy episode, but one that represents an essential unlocking of potential, in one of its less developed characters to this point.

I could take or leave the rest of “The One Where Rachel Quits”; Ross being mostly distracted with selling holiday-themed cookies at least keeps his snide comments away from Rachel’s plot, which is about its only redeeming factor. I’m not sure why Friends would always look to push how obnoxious Ross could be, but boy does his first child mentality rear its ugly head here. You can pick your poison: Ross insisting the eternally broke Joey buy more cookies, engaging with some Monica fatphobia, or talking shit to children during the grand prize tally – all of them are equally annoying, the kind of Good Ol’ Ross material Friends would lean on for cheap laughter, all of which came at the expense of making Ross anything more than insufferable (though not every character should be lovable on a show, Ross’s defining of how punchable of a person he could instantly become is truly an evil superpower for the ages).

I’m the same level of indifference with the Joey and Phoebe plot – though admittedly, Phoebe’s foray into ridiculous environmentalism here certainly feels like a blueprint for other iconic sitcom characters, particularly Britta from Community. Friends often likes to poke fun at Phoebe’s more bohemian characteristics, writing her off as ridiculous background noise to be laughed at, even when her intentions were mostly altruistic, like her Fargo-like moment of seeing an unloved Christmas tree put through the wood chipper. But “TOW Rachel Quits” doesn’t use the opportunity to reveal anything about its character – either earnest or cynical, which renders one pointless Joey/Phoebe plot among many throughout the series, one that just so happens to come at the intersection of Joey’s non-acting pursuits and Friends‘ need to have something visibly recognizable as a ‘holiday’ story as the show’s only episode scheduled in the month of December 1996 (it ends with Monica’s house full of dead trees, which… doesn’t .

“The One Where Rachel Quits”, in theory, should feel like a more momentous episode: after all, Rachel quitting Central Perk is perhaps the biggest shift for the character to date in the series, one that kicks off some of the show’s more memorable (and horrifyingly iconic, unfortunately) plots of the show. But here, it’s mostly set dressing amongst a pair of side stories that do the bare minimum in engaging with the most interesting aspects of an NYC sitcom set during the holidays – and for that alone, “TOW Rachel Quits” feels like its leaving a lot on the table, a bit of an underwhelming return to reality for a series that’s (mostly) been riding a creative high for the first two-plus months of the season.

Up next: Phoebe gets laid and Rachel gets bored in “The One Where Chandler Can’t Remember Which Sister”.