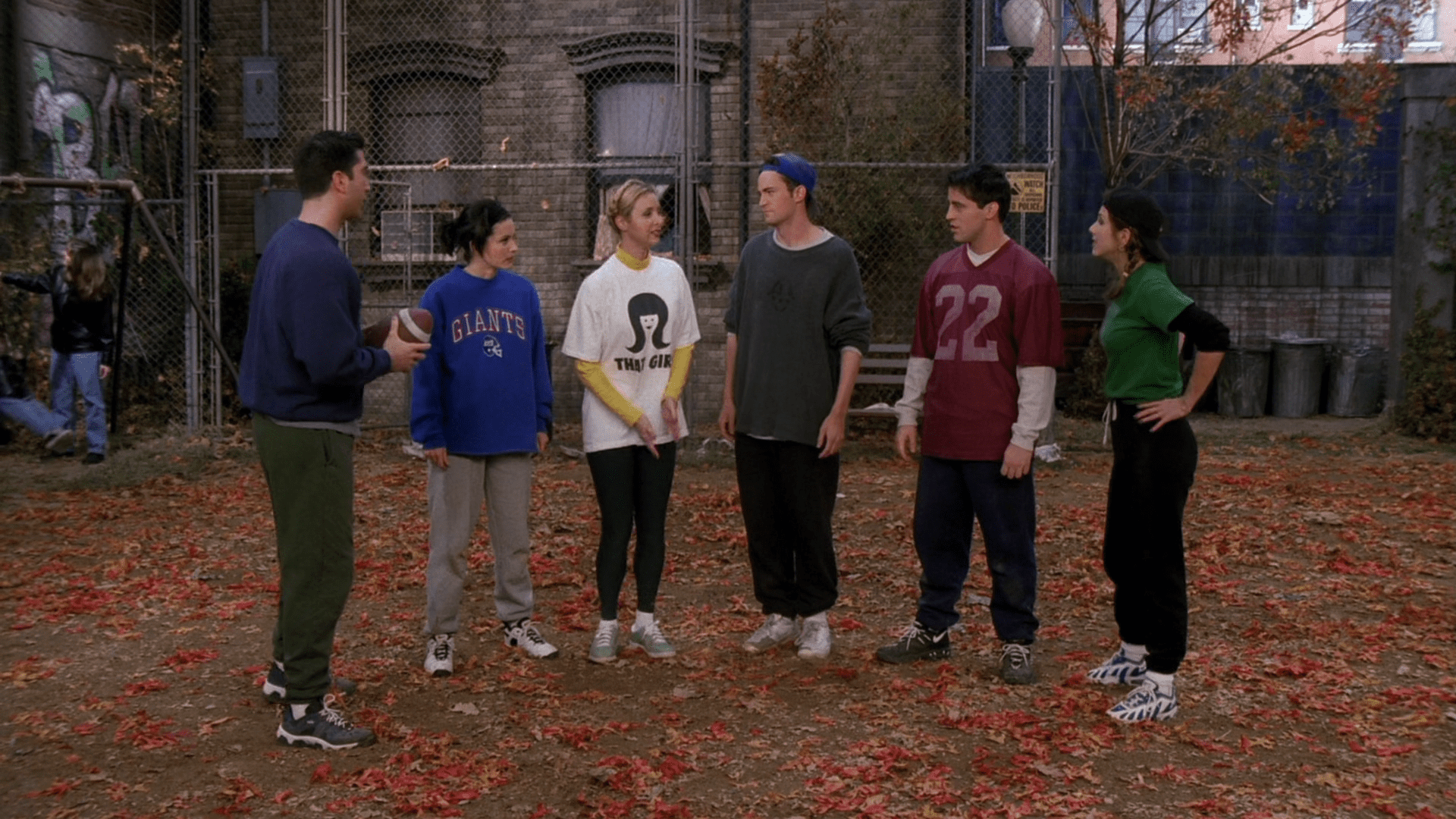 After skipping Thanksgiving in season two, Friends‘ most iconic holiday returns with “The One with the Football” – an episode that’s less about the holiday itself, and more about pulling the curtain back a bit farther on Ross and Monica’s sibling dynamics. “TOW the Football” is really only remarkable for the technical set piece it stages for the majority of the episode, and how it uses that to offer us the darkest glimpse yet into the strange parallel universe of Ross and Monica’s childhood. Outside of that, “TOW the Football” is surprisingly pedestrian, filling out the rest of its running time with multiple montages and a Joey/Chandler side plot that is rewarding for precisely nobody (both audience and characters alike). Though it’s far from the worst Thanksgiving episode, it is a prescient reminder that Friends‘ Thanksgiving episodes are mostly iconic in presence only; the show’s inconsistent execution of these episodes would only grow starker as the years would continue.

But I digress; “The One with the Football” is a rare episode of Friends where it pits its characters in direct competition with each other – outside of the occasional foosball or table tennis game, Friends was never really one to have characters butt heads with each other in contests of ego (except for Ross and Monica, of course). In that sense, “TOW the Football” is a really strange episode of the series, one that is a bit less sharp in its comedy, and a lot more active in its presentation.

It’s honestly kind of nuts just how intricately choreographed the scenes set in the neighborhood park are(which I’m fairly confident we never see again in the series, which is a shame); few sitcoms are willing to indulge in such extended sequences full of movement and action, especially multi-camera sitcoms of the time. Though the football game itself is barely logical and clearly limited by the ability of both production and performers to stage the more elaborate stunt work, the technical mastery on display just to make these scenes work is rather impressive – throw in a couple random, wonderful homages to classic sport films on top, and “TOW the Football” easily ranks among the most complicated episodes the series’ has pulled off to date.

Given that, it’s not a big surprise that there’s not a lot else the episode has to offer – there’s clearly so much attention and focus being put on the football game being played, the episode barely has time for the one plot it tries to insert in the middle. Also, it’s not a good one: Joey and Chandler fighting over Margha (mostly known as “the Dutch girl” in the episode) is not entertaining in the slightest, a less than endearing preview of the competitiveness Joey and Chandler are willing to exhibit in the name of getting laid (though thankfully, next time this story happens, it is infinitely more interesting). If you want to see the roommates at their very shittiest, I guess “TOW the Football” has something to offer – for fans of Generation X’s Bert and Ernie, however, their interactions in this episode are head-shakingly awful in their dismissiveness and selfishness of Margha as a human being. Though we’re meant to still empathize with Chandler’s broken heart, boy he does not make it easy here – and though it lends itself well as a parallel story to Ross and Monica, it certainly doesn’t make it a good, or even entertaining, one to watch.

The Ross/Monica stuff at least taps into the inherent insanity of their relationship; the ripple effects of the story, with them both insulting Rachel to her face, is an ugly, immature side of their characters that, while it is unpleasant to watch, matches up with some of the behavior they’d both exhibit throughout the series (Ross in particular, as his annoying tendencies grow exponentially in future seasons). While their petty competitiveness is played for laughs here, it’s really just fucking annoying: if there’s something compelling about their pursuit of The Gellar Cup, it is certainly lost on the Friends creative team – to the point it even feels like the laugh track is uncomfortable with just how obnoxious the two are becoming with everyone around them.

To its credit, “TOW the Football”, particularly the extended version, doesn’t try to forgive or soften their ridiculous personalities. While the broadcast version of the episode ends with them marveling over the snow, the extended version features an additional scene over the closing credits, where they both immediately renege on a deal to throw the Gellar Cup away forever. Though this bit certainly doesn’t redeem how repetitive “TOW the Football” is with their interactions, it is a nice tag for the episode, a reminder that they’re both indeterminably cursed by their own obsessive tendencies, two siblings locked in eternal conflict with each other.

If anything, the episode gives us that reminder, that sometimes childhood memories manifest in adult behavior in strange ways; while its hardly an idea an entire episode can carry itself with, it at least resolves “TOW the Football” in interesting fashion, as something ever so slightly more than the sum of its parts (which, in this episode, is considerably underwhelming, especially considering the relative hit rate in the first third of this season). Like many other Friends holiday episodes, “TOW the Football” is a strange anamoly, an episode more iconic for its imagery than its actual content, more memorable for its unique staging than it is for anything it said about its core cast of characters (or a very confused Dutch girl, of course).

Up next: Ross joins the Brown Birds and Joey works on tree genocide commission in “The One Where Rachel Quits”.