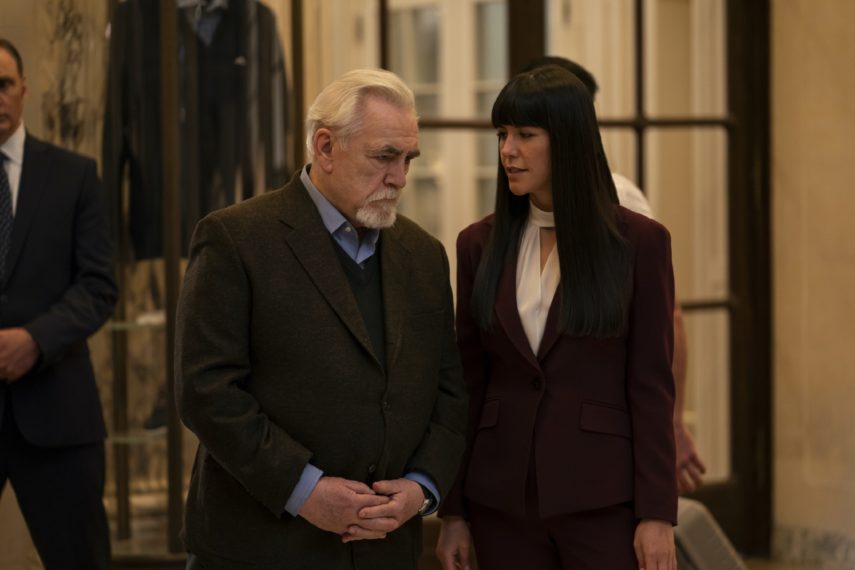 “What It Takes” may very well be our view of Logan Roy at his absolute highest; as Kendall’s case slowly begins falling apart around him, and Republican presidential nominees line up to pay fealty to him, Logan is fully engrossed in the exquisite afterglow of survival, exacting his power to bend the spineless faps around him to do his bidding. Of course, on Succession, that means using his children as political pawns, cuddling up with a naked fascist, and (quite possibly) sleeping with one of his subordinates… make no mistake, the Logan Roy of “What It Takes” is a very different man, than the one we saw clinging to Kendall in the forest during “Lion in the Meadow”.

Now, it’s fairly obvious just how heavily the hand is tipped in Logan’s favor during the episode, that the tables will turn on him at some point; but part of what makes “What It Takes” such a powerful hour is how little Logan Roy gives a shit about the stress points around him. While Greg and Tom actively give themselves ulcers over the possibility of going to jail (Tom takes Greg to a diner so they can practice eating jail food, in this week’s most telling sign of their uber-wealth), Logan sits on a couch while a parade of presidential hopefuls come in the room – right after he laughs off the president’s sister, and his family openly admonishes him as “The Raisin” whose corpse will only occupy the most powerful seat in America for a few more months.

Well, the second most powerful seat in America: as “What It Takes” steps back and quietly observes the chaos swirling around Succession‘s arrogant, grinning patriarch, writer Will Tracy and director Andrij Parekh paint perhaps the most cynical, honest portrayal of American politics television’s seen in a long time (sorry, Veep and The Good Wife). With the Roy family openly debating the merits of pursuing the fascist voting bloc, it’s clear nobody really gives a shit about any actual political or socioeconomical issues the president is supposedly supposed to care about; the naked grabs for wealth and power amongst the white conservative power structure is alive and well on Succession, and it makes for a stunning hour of television (also, how petty things decide the future of an entire ideology; lip licking, doing work, and trying to gain favor are all called out as weak behavior by Logan, who can’t even properly thank his children for saving his empire while he was piss-mad).

Where “What It Takes” shines is how unflinching it is, without veering into the cartoonish, Trump-era SNL mentality that’s defined so much of mainstream American entertainment and its lame duck attempts to condemn fascism. Yes, Nazis are bad – but treating them as a vaporous influence that just simply needs to be exhaled from the collective lungs of society is a stupid idea. As Succession has presented from its first episode, is that the structures of power in capitalism are insulated and interested purely in self-preservation; after all, there is no mention of anything that actually has to do with America mentioned at any point. It’s all about the bottom line; and with ATN having pulled off a political assassination of the president, and looking down the shaky barrel of the Department of Justice, that bottom line is in desperate need of securing.

To find that device, that catalyst for maintaining the money-printing status quo, the Roy family entertain all sorts of terrible ideas; all of which, of course, turn relatable human reactions into nightmare horror shows of self-aggrandizing nonsense. I mean, Logan Roy is empowered enough to ask the sitting Vice President if he’s willing to fire the deputy Attorney General (currently pushing the Waystar investigation to the forefront, even as Kendall’s case grows weaker by the day); there isn’t a fucking thing he cares about except his own survival, to the point he doesn’t even bother to hide his own corruption anymore. With Gerri and Karl out of the room, Logan is unhinged – and because of that, makes him a prime target to be turned onto Tom Mencken (a formidably restrained Justin Kirk – we’re a long way from Animal Practice!), whom Roman sees as a perfect vehicle to funnel his own hatred of poor people and minorities through.

Perhaps the most fascinating character to observe in this episode is not Logan, however – it might be Shiv, who continues to spiral in ways that even Kendall might find impressive (though Kendall, who is prominently featured in a shot observing him walking down a spiral staircase, shouldn’t gloat much). She begins the hour demanding recognition for her proxy moves in “Retired Janitors of Idaho”, and when those go unrequited, she lashes out at Tom and then tries to throw in soft-shoe candidate Rick Salgado, whose policy wonk nature can’t stand next to the bravado of Mencken. Oh yeah – she also tries to float the idea of Logan “switching” parties, and then screams about how her opinion matters more… Shiv continues to fail at reading the room, and as a result, continues to eat shit in her empty pursuit of the dangling carrot of power. She doesn’t get to be the kingmaker; to be one, she’d have to have enough spine to realize that standing two people away from a Proud Boy in a photo, still means you’re in a photo with someone who’d be totally down to invade Poland, if the idea was broached.

In the end, however, the selfish pursuits of the Roys continue to drive them forward, even as it pits them against each other (after all, money brings everyone together!). Connor keeps puffing his chest out at the other candidates, even though Logan only half-entertains the idea of supporting him; Tom, even after getting the home run pitch from a desperately floundering Kendall, is still holding onto hope that all the shit eating he’s about to do is going to be worth it (he even willingly accepts taking on Greg’s responsibility in everything, as he embraces his hopeless role as corporate Christmas tree). Just a whiff of power, and everyone comes running; Logan is absolutely doused in it during “What It Takes”, as high and mighty as I imagine we’ll see his character, openly ogling Kerry in front of his kids and telling powerful politicians to kiss the ring – only pausing to talk shit about his ex-wife’s new fiancé, which the Roy children learn about from a fellow attendee (of course, they completely miss the giant red flag about their own mother not giving a fuck about them).

In what is a rather phenomenal examination of those in power and how they’re able to hold onto it, even when the deck is seemingly stacked against them, I think the best scene of it all comes between the two characters holding nothing but dust and smoke between their fingers, Kendall and Tom. After Tom walks out of the strategy meeting (no, his wife does not notice), he meets Kendall to hear his pitch deck for changing teams and getting out of jail. However, Tom knows the score; after hearing Kendall’s barely sheathed pleas to save his ass, Tom points out to Kendall that he’s spent a long time watching Kendall get fucked, and never once seen Logan be defeated.

We can all see Tom is desperate to get out; Matthew Macfayden has been great, but he’s otherworldly in his scene with Kendall. Before meeting with him, he talks to Greg about the clarity of vision one has once they give up hope; the ultimate form of defeatism is a peace unto itself, as the rare moment you don’t feel like a giant piece of shit suddenly becomes a moment worth looking forward to. Tom has that moment when Kendall courts him; and for a brief second, he lets his mind dance with the fantasy of making it out unscathed, able to keep his wife, turn her into the woman he wants her to be, and keep himself from having a permanent criminal record. But he knows Kendall’s dreams are just that, and after a brief aside into Wonderland, he returns to reality – and reminds Kendall that he didn’t pick a fight with his dad, he picked a fight with arguably the most powerful man in the United States.

Though I feel I keep repeating myself, it’s obvious “What It Takes” sets another high bar for Succession, one the final three episodes of the season will have a very difficult time meeting. From its parade of guest stars (Stephen Fucking Root also appears, as a big-time donor looking to hitch his wagon to Logan’s selection), to its unflinching observations on how the powerful exact their will on the other 99% (and do so by utilizing the same petty faults and shortcomings us “normies” have), “What It Takes” is television show operating on all cylinders, its cast, writers, and creative departments all coalescing with a harmony even Nicholas Brittell would be envious of. It’s one of those moments of clarity that is impossible to look away from, when a series crystallizes into exactly what it wants to be, and its vision is met by its executors and absorbers alike – this isn’t just a case of a Roosevelt in the room full of Timothy McVeigh’s that is 2021 TV, either. Coming out of a slightly uneven second season, Succession has found its full voice in season three, and is speaking it with unforgiving abandon – it is as disciplined and focused as you’re going to see a television show, so let’s make sure we continue to enjoy it while it lasts, ok?