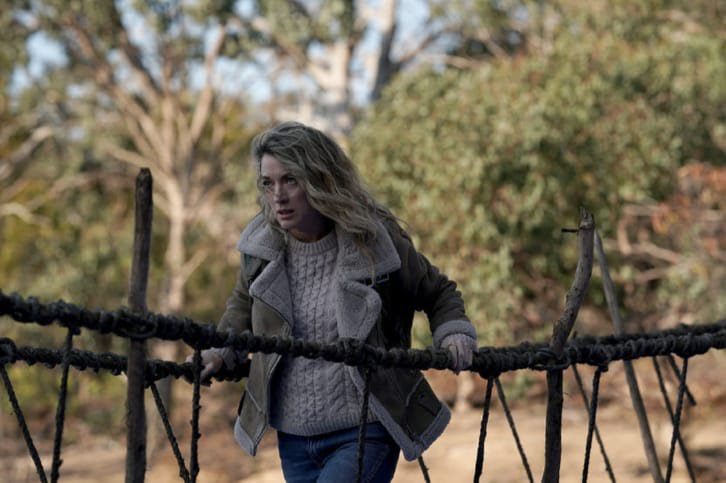 La Brea‘s spent nine episodes opening a bunch of doors; Civil War gold, cows with bar codes, Time Gashes, tribal villages, teenage hormones… it’s all been a lot of loud noise and movement for the sake of filling space between nascent nods towards actual plot and character bookending each episode. As the penultimate episode of this misadventure into 10,000 B.C., “Father and Son” has the tall task of trying to thread the needle between all of these extremely thin, fragile threads – which it absolutely does not do, in what I can only describe as a pathetically gutless hour of television, one so afraid to commit to anything that what little it tries to do ends up feeling like nothing.

Perhaps the best example of this are characters like Josh, who each week are subject to another round of Spin the Wheel of Personality. Sure, teenagers are inconsistent, but after a season of whining and being pissy towards Eve, he suddenly is at her defense when her affair with Levi is revealed (by his child-father, no less)? Riley, who has spent a week giving Josh blue balls and complaining to her father, is suddenly inspired to re-pursue a future in medicine… and then, of course, there’s Veronica, the violent, abusive religious fanatic who is suddenly a remorseful person whom Lily (the sister she’s abused) has offered full spiritual and emotional redemption to. Part of La Brea‘s issue is it refuses to try and understand its own characters, and contend with the narrative challenges those might present; instead, characters just change when the plot demands them to… which is antithetical to building both internal and external conflict, and why nothing that happens in “Father and Son” feels like anything.

Which it really should; the reveal of Gavin’s adopted sister Ella as Lily should mean something to us, have some significant relevance in helping us understand the emotional clarity this journey has offered its characters. Ella’s introduction, and seeming relevance to the main story, does not do that; it simply places another puzzle piece on the table, so when Ella goes through the Mountain Top Time Gash at the end of the season, La Brea can pat itself on the back and say “Look, we did the thing!”. That is not interesting television; there is a way to build to the inevitable, but La Brea hasn’t established those inevitabilities, due to its illogical plot (“all of time is basically happening at the same time” – what the actual fuck?!) and lack of consistency with its characters. There are no expectations the audience has for this series; without that, revealing twists and surprises can’t land, because there are no discernable beliefs or assumptions for the series to undercut – which is kind of the whole fucking point of trying to surprise someone, and this show just wants to tickle its own nuts every twenty minutes or so, with some hint towards something potentially, maybe meaningful down the road.

(At one point, someone askes the doctor to stop talking in bullshittery and explain something, and she brushes them off so hard, in a way that makes me wonder if this show actually has any idea what story it is trying to tell).

More troubling, however, is how fundamentally this show misunderstands its audience; I say this because anyone who has sat through the first nine hours of this series, would not be extremely invested in the continued existence of Izzy and Josh, and the cartoonishly intense staring and stiff behavior both performers seem to think is believable (quite frankly, Zyra Gorecki just does not look comfortable in front of the camera, which I consider a failure of each individual episode director and the show’s writers for refusing to write scenes that play to her strengths in any way, shape, or form). Removing the children from La Brea would be a matter of convenience, not something I’m invested in dramatically; I mean, this show has done nothing but portray the Harris family as a group of navel-gazing narcissists who cover up their behavior with noble excuses (“I had brain damage”… “My husband wasn’t there”… “My mom didn’t do the thing I wanted”), so telling me to buy into their continued existence is a real big swing.

And boy, is it a miss: though La Brea does a terrible job at convincing the audience that Isiah/Gavin is important for any particular reason (except that without him, Eve wouldn’t be a mother, and thus obviously an absolute failure as a female human being); “this man needs to cum inside his future wife” could be an exquisitely dramatic plot point, especially since we kind of already know its resolution: but La Brea has no idea how to grasp the irony or the science fiction intrigue of this episode’s premise; so instead, we get a snooze fest where La Brea limply tries to convince the audience that maybe Gavin or Eve will fail, and Isiah may never become a divorced veteran with a drinking problem – which, apparently would be a bad thing?

La Brea really needed to spend these first eight episodes explaining a lot more, or explaining a lot less; landing in the middle, where every half-described plot point is followed by two characters exchanging index cards with the words “HERE ARE MY EMOTIONS” written on them in the place of actual dialogue. “Father and Son”, being a penultimate episode, should move with the purpose and verve of a series excitedly building to its big moments; La Brea, in its ninth hour, feels like it has no idea where it’s going or what it wants to be yet – which, given that there’s only an hour left, is a very disadvantageous position to be in.

One might consider prognosticating what happens in the season finale, but what’s the point? “Father and Son” certainly does a lot of walking and talking, but it is capable of doing neither exceptionally (it can barely do both at the same time without getting confused). Even heading into the last episode of a very truncated first season, I was hoping La Brea would show some sign that it had unlocked something within itself, something that would turn its Land of the Lost, but Terra Nova-esque premise into something interesting – or at the very least, as exciting as it was dumb.

But mostly, La Brea‘s been guiltier of a much worse crime; it is utterly boring television, devoid of any creative value, and unable to ascertain anything about its own identity it believes in. La Brea is an excercise in avoiding commitment, afraid of pushing characters forward (speaking of, what the fuck happened to Lucas in this episode? Not even one disparaging line about Murderer Mom, whom everybody has forgiven?) and also deathly scared of actually having something to say, about families, stoners, or time travel – which, at some point, La Brea will have to commit to.

Or maybe it won’t; maybe season two of La Brea will just be more of the same, hints of plot intrigue sprinkled amongst fiendishly underwritten characters and a story set to the rhythm of a spastic sloth sandwalking through a Dune scene. I could continue to go on about the intricacies of “Father and Son”, but each and every scene boils down to the very same essence; La Brea is nothing but a CGI nose bleed (sorry, Ty), occasionally colorful, briefly surprising – and laughably short-lived, subtle as a sledgehammer to the dick, forgotten as quickly as it arrived. I still can’t believe this show was given a second season; I’m doubtful there is a plot twist or CGI animal bad enough to rope me back in for another season in 2022, but I’ll certainly be watching this final hour to find out what the fuck this was all about.