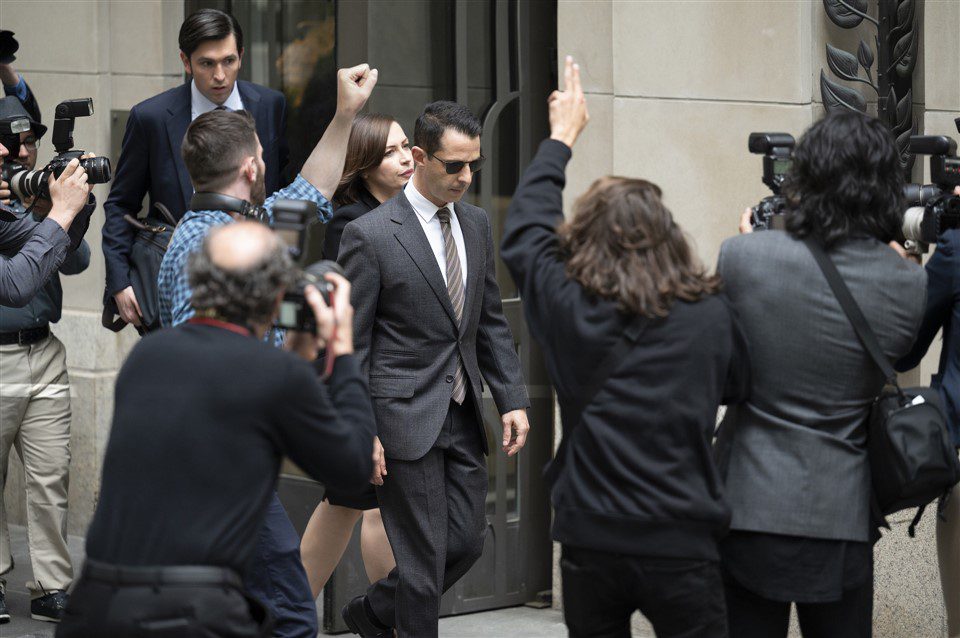 Who’s ready for another shit show at the fuck factory?

Succession‘s third season premiere doesn’t need Logan Roy screaming “It’s fucking war!” to make its point; “Secession” is a moving labyrinth of chess pieces, a frenetic race of two juggernauts recruiting their troops and declaring their territories in the sand. Unlike most episodes of Succession, which allow its central dramas to play out at a single location, “Secession” uses its catalytic event – the chaotic aftermath of Kendall’s press conference – to push its dramas outward, whiplashing from location to location, and smartly linking its splintered factions together by the occasional phone call, each dripping in the kind of dramatic tension reserved for only the best television shows on TV.

Airing a full 735 days after “This Is Not for Tears”, “Secession” offers both a smooth reintroduction to Succession‘s complicated web of relationships, and a tantalizing preview of the shit show to follow in the next eight episodes. Save for introducing a few new characters (like Sanaa Lathan’s Lisa Arthur), “Secession” is 60 minutes of table setting, rearranging the various power structures of the Roy family as Succession retools itself, and its various structures of power, on the fly. The signature marks are still there; Kendall’s unearned confidence, Greg’s stammering (and tethering himself to dangerous sinking ships), Logan’s less-than-casual misogyny… it’s all here, the signature blend of black comedy and bombastic drama that immediately sinks back into its familiar rhythms – it’s just mixed in a slightly different blend, shuffling characters and positions around as it sets the stage for the season to follow.

The (occasionally inelegant) simplicity of “Secession” allows a lot of room for this rejiggering; though there is a lot of movement in this episode (for Logan, this involves getting the fuck out of America quickly), the episode really only leads us to two concrete conclusions, as Logan and Kendall spend the hour filling out their war cabinet – which, as one might expect with modern corporations, sees father and son standing behind two powerful (and female) lawyers as their chosen generals to lead them to ultimate victory. (Ok, three if you count Kendall getting “good memeage” important plot development.)

In one corner, we have Gerri – Succession‘s Hot Mommy, whose chemistry with Roman is only paralleled by the frightening way she casually tries to put the motherfucking Department of Justice in a headlock, with a conviction that serves as a prescient reminder that Gerri is extremely powerful, experienced – and most of all, ruthlessly protective of her self-interests, putting a wonderful wrench in the sexual tension building between her and good ol’ Romulus Roy, who himself shies away from the spotlight as soon as the pressure begins to build in “Secession”.

On the other side, we have newcomer Lisa Arthur, leading the charge for Kendall’s plan to extract his father from his own company, without destroying the kingdom he so desperately wants to reign over. Given Shiv’s relationship with Gerri, it’s no surprise her ‘friendship’ with Lisa is openly hostile; Shiv is not exactly warm to straight shooters, rebuffing everyone from Gerri to Tom when they speak the words she so often tries to dance around. And of course, Shiv expects the slightest show of humility to offer her a red carpet to whatever she wants; seeing Lisa reject that notion is fantastic, another bit of narcissistic kindling Succession adds to the growing inferno at the Roy family’s core.

The juxtaposition of characters like Gerri and Lisa with Shiv and Kendall make for fascinating material in “Secession”, drawing a neat line between the professional stakes of this conflict – and reminding us just how petty these rich siblings are, setting up a civil war within the family over the future of a dying company, all because of hurt feelings and petty, misguided senses of ownership – not just over the company, but over human beings, over sociopolitical conversations, over the fundamental direction of the country itself (remember when Shiv joined a presidential campaign? That went over well). Succession never forgets that the Roy children are an intelligent group of adult babies, and “Secession”, when it isn’t focused on the immense about of table setting it has to do, revels as it always does in the nonsensical, self-righteous attitudes of the Roy children (even Connor, who thinks he can use the “irono-cycle” to save his girlfriend’s awful play, which is bankrupting him – the desperate self-preservation is a great reminder that the Roy blood runs thick through his veins).

Despite the abundance of pleasures in this episode, from Kendall Roy asking for “cool tweets”, to Frank and Karl quietly ruminating on how fucked they all are, “Secession” ultimately feels a little inert, pushing the needle forward less than one would’ve hoped after a 24-month absence between seasons. Though it is, by no means, a bad episode, “Secession” mostly feels like batting practice for Succession, ironing out its timing, tweaking some elements (including this season’s slightly updated score) and organizing its thoughts before heading into the (slightly-shortened) season to follow. As arguably television’s best series, “Secession” is certainly afforded that leeway, even if it isn’t quite going Full Fucking Beast yet. “Secession” is a decent opening move, to borrow language from Logan – and unlike Kendall, I have full faith Succession has thought this play through, loading the dramatic chamber for what appears to be an explosive cascade of dark brilliance awaiting to follow in this third season.