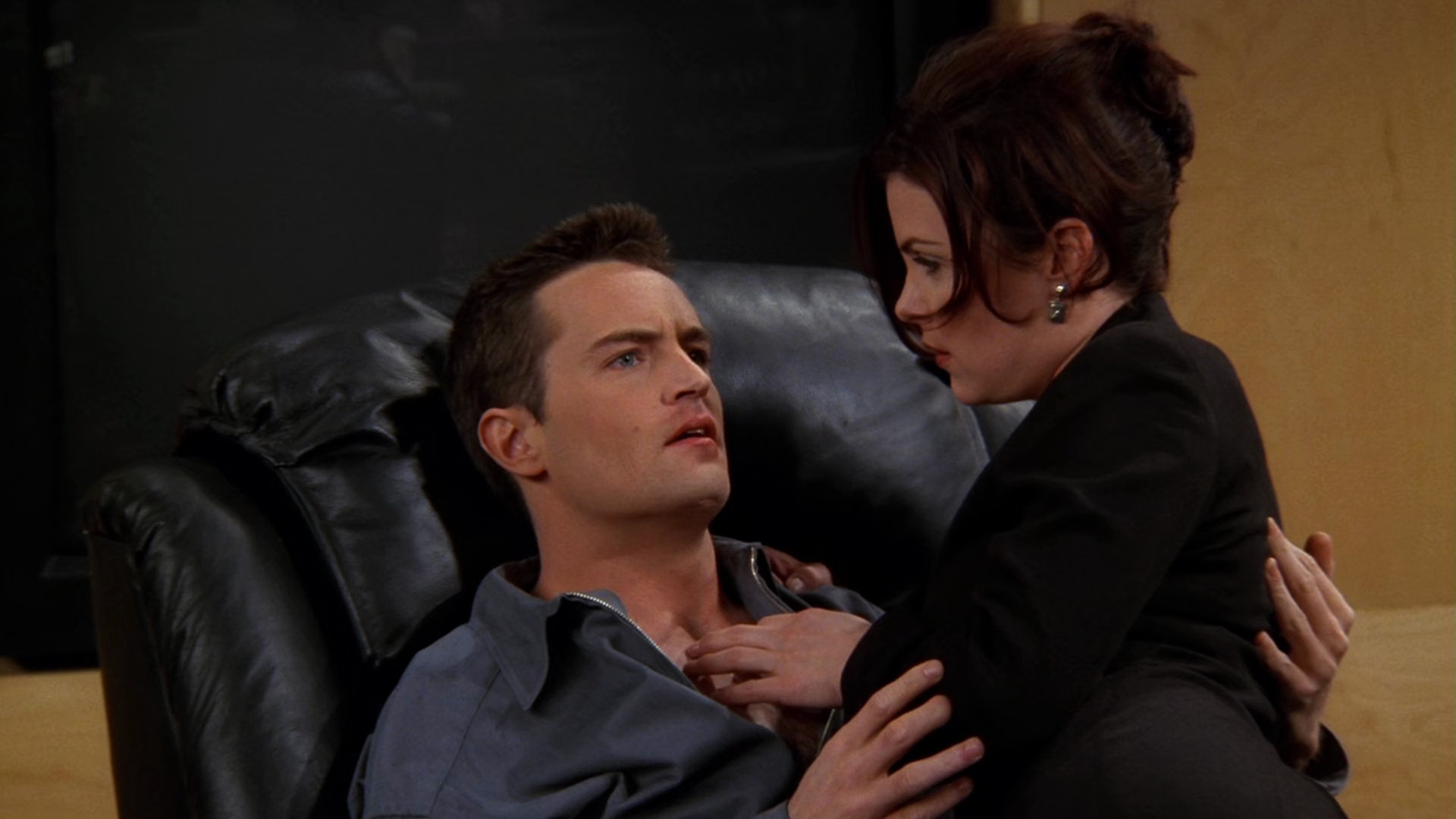 The second of Wil Calhoun’s trio of season three scripts centered on the phenomenon known as Phoebe, “The One with Phoebe’s Ex-Partner” is one of those occasional Friends episodes that almost feels like a different show. The easiest comparison of the era, of course, would be Seinfeld: the stories of Ginger (the iconic Sherilyn Fenn) and Leslie (freakin’ E.G. Daily!!!) are steeped in ironic twists, and it is certainly an episode of Friends willing to engage with its darker side a little bit. To me, a more apt comparison would be Friends by way of NewsRadio, with a side of It’s Always Sunny in Philadelphia – though I hesitate to call the episode edgy, how its trio of stories play out are analogous to the rhythms of those more sardonic, nihilistic sitcoms than Friends‘ lighthearted, goofy self.

Perhaps the biggest benefit of watching this episode 27 years after its airing is knowing what comes next; as the Rachel/Ross plot in “TOW Phobe’s Ex-Partner” unsubtly alludes to, their arc is a cresting wave hovering above the rest of season three, poised to crash and disrupt the entire narrative pacing of the season in the episodes to come. “Phoebe’s Ex-Partner” almost exists as a preventative measure, a way to start introducing some darker elements into the show’s bloodstream, but doing so through stories that are humorous in nature.

Notice how none of the episodes find a neat resolution; at the episode’s end, Rachel’s still irked that Ross is reveling in Mark leaving for a new job, Phoebe’s depressed after her old partner runs off and sells “Smelly Cat”, and Chandler is left alone, a victim of both hubris, and his own anatomy. Though Friends is never completely married to neat resolutions, it is almost insistent on ending each of its three stories on dissonant, unsatisfying notes, another revealing example of season three’s underrated versatility at adapting different, popular forms of comedy.

It may never be as great at farce as Frasier, or willing to go as far as NewsRadio to indulge its nihilistic heart, but “TOW Phoebe’s Ex-Partner” is the kind of episode later seasons of the show would’ve benefited greatly from, with their low stakes and room for comedic performance. My favorite, of course, is Joey’s monologue, perhaps the finest distillation of Friends stepping outside of its comfort zone for a minute, revealing a backstory for Ginger that is hilarious in how shockingly uncomfortable it is (for those reading without rewatching: he threw her artificial leg in a fireplace, and then ran away in horror), and further elevated by LeBlanc’s deadpan delivery of each detail.

Of course, Joey’s story is more of a tone setter than anything; but as the comedic highlight of the episode, as well as a catalyst for the other humor-centric stories, it is undeniably effective. The reveal of this, as you’d expect, sends Chandler into a neurotic tailspin – which, to Friends credit, is never justified as anything but ridiculous, and never played to mock Ginger as a character (which… a bit surprising for this series, to be honest!). It’s really just a vehicle to deliver Chandler another unwanted helping of karma: Ginger gets turned off by Chandler’s still-present third nipple and dumps him on the spot… and once he removes in and starts missing easy punchlines in conversation, wonders if he’s cut himself off from the source of his greatest power (in what is easily one of Friends‘ best closing credits scenes).

Ultimately, this story doesn’t really matter in the scheme of things; but again, it is really about establishing a different kind of tone for the episode to drive the Phoebe-centric A plot of the episode. Thankfully, a bit more of a balanced script from Calhoun allows it to avoid some of the glaring issues with his previously credited episode “The One with the Jam” (aka “The Weird One Where Phoebe Dates Her Sister’s Stalker”). Friends sometimes forgets that the best version of Phoebe is not the funny, random one – it is the version of Phoebe that is persistent and driven, one who doesn’t let her inherent aloofness and penchant for devastatingly disappointing life events destroy her soul.

“The One with Phoebe’s Ex-Partner” is one of the better examples in these early seasons of finding balance in that character; it’s not perfect, often leaning on her inane responses to generate comedy from what’s a rather dry story about her former bandmate. But it is effective in reminding us what makes Phoebe perhaps the most inspirational character in the series; no matter how many times the world fucks her over, she refuses to let go of her beliefs and dreams, even in the face of loneliness, disappointment, and financial uncertainty. Phoebe’s been through a lot worse than anyone else in Central Perk has in their lifetimes; though it hurts to see Leslie steal her music again for the sake of making money, she refuses to compromise her most important values to appease anyone in her life. For a character without a lot of coherency, Phoebe’s resilience is always present in her character – and when it is allowed to shine, even in more ironic, humor-driven stories like “TOW Phoebe’s Ex-Partner”, it almost always shines.

Underneath these wonderful bits of humor and pathos, of course, is Ross – who, at this point, has almost become the antagonist of the series. Just look at him, cackling in the background of Rachel’s office, giggling with strangers at the seminar he insisted he attend, peddling his usual bullshit about “feeling left out” because he can’t hang around her work like he used to…. his transformation into a fucking vulture is basically complete in this episode, and it’s not pleasant to see.

Of course, some of this is necessary to set the stage for what is to come – but that doesn’t make it any more pleasant in the moment, except when it is used as another moment for Rachel to establish herself as an entity outside of her romantic entanglements (which this show has struggled off and on with since the pilot, if we’re being honest with ourselves). In an episode of monologues, Rachel’s desire to have something of her own, something exciting and scary she gets to navigate herself, really stands out – it’s a great reminder to the audience of why her journey is such an important one, and plants the seed for why Ross has become a bit of a hindrance to that (both for the characters, and the show’s narrative development as a whole).

For an episode that mostly consists of what I’d consider are forgettable, throwaway plots, “The One With Phoebe’s Ex-Partner” is subtly a fascinating episode of Friends to deconstruct, one that subverts its own sense of humor in engaging ways, while still maintaining the same rhythms and narrative momentum that have driven the first half of season three. It’s also a glimpse of what a more sardonic version of Friends might’ve been – a tantalizing proposition I’m not going to let myself fantasize too much about, particularly when that aforementioned wave floods the entire season around it in the next episode.

One thought on “Second Look: Friends Season 3 Episode 14 – “The One with Phoebe’s Ex-Partner””

Second Look: Friends Season 3 Episode 13 – “The One Where Monica and Richard Are Just Friends”