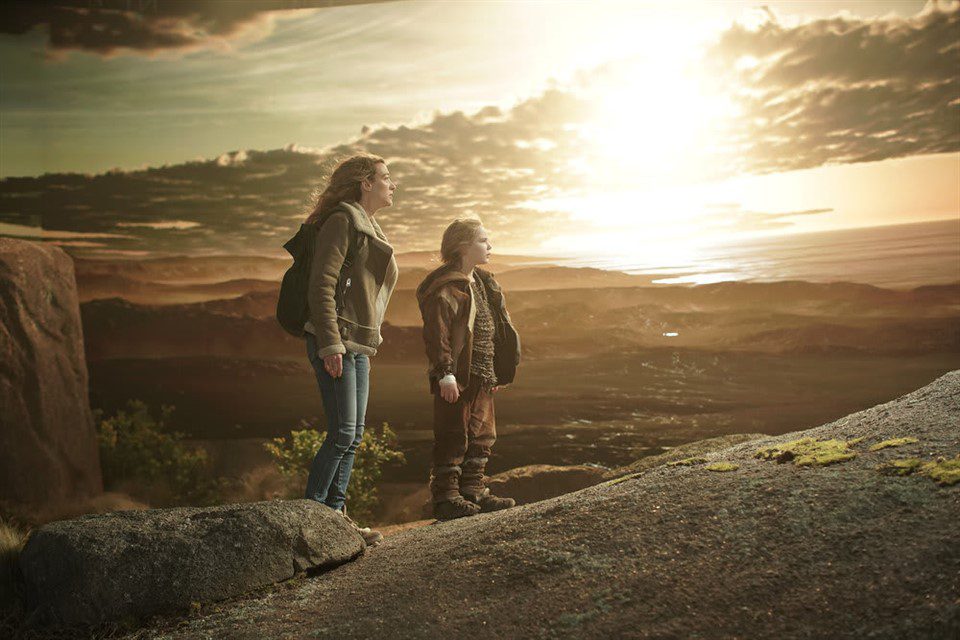 At some point during the mess of rushed resolutions and braindead twists in “Topanga”, the final chapter of La Brea‘s abbreviated freshman season, one steps back from all the noise to try and figure out what this show is really about. For how much this show has openly attempted to ape LOST, La Brea has fundamentally misunderstood what made that series great, especially in its earliest episodes – a comparison it openly invites again and again when it tries to metatextually reference ABC’s science fiction masterpiece. “Topanga” is yet another shining example of this, a season finale that peddles clunky developments as important character moments, and undermines what little goodwill it has built with a whoppingly stupid third act.

“Topanga” sets its characters on two goals; in modern-day LA, Gavin and his adopted sister Lily are trying to get through the Time Gash to save everyone – while on the other side, Eve tries to shove her child/future estranged husband through a portal on top of a mountain (which is through a cave, and up a tar pit someone has dropped a ladder over). But more so, La Brea‘s finale is a final opportunity for the lifeless series of narcissists and dumb teenagers to make an impression, to deliver some illuminating bit of character or story that brings clarity to its vision. Season finales for plot-driven series have to deliver on that front; random character deaths played for drama and unexplained plot twists are not inherently satisfying, if they are grounded in things the audience doesn’t give a shit about.

Which begs the question; as an audience, what do we give a shit about on La Brea? Perhaps more importantly, what does La Brea give a shit about itself? For the majority of “Topanga”, it seems to only care about its own continued existence; strip apart the limp attempts at surprises this finale calls plot twists, and it seems clear La Brea holds no creative or moral allegiance to itself. Underneath Lily’s fading map and Isiah’s climb up the mountain is a vast sea of emptiness; save for the couple of rushed plot resolutions (Veronica and young Lily hurriedly apologizing for a life of trauma) and the laughably pointless death of Marybeth, “Topanga” is literally just characters running around nondescript locations while they yell out random shit like “There’s more you need to know!” and “I’m sorry that I hurt you!” because someone pointed out it was a season finale halfway through writing the episode, so everything just comes to a halt.

Remember the Civil War gold? Or the dozens of tribes mentioned earlier this season? That’s not what La Brea cares about, as they’ve gone unmentioned, right alongside the stories about heroin dealers, debilitating back injuries, a lack of food that existed for six seconds, and the increasing casualness with which multiple characters are brandishing guns. Instead, La Brea wants us to believe that The Story of Isiah’s Fall is the big story; for about five seconds, until it ponders whether Gavin/Isiah’s time traveling paradox is a dramatic point it should pull on. And then ten seconds later, the Harris kids are complaining about vague pains they are having, which are bad enough to cause physical distress when nothing’s going on, but provide absolutely no obstacle when suddenly the dramatic tension is ratcheted up… to say there isn’t an attention to detail would be dishonest, because it is clear La Brea cares about nothing else except justifying its own existence through the sheer sake of plot mystique.

Problem is, the plot has to be good; and at no point during the journey of La Brea‘s first season has it convinced it has anything interesting to say, either about Gavin and his family, or time travel, or climate change, or time travel… or anything. La Brea is just Rebecca Aldridge, a bullshit person who spews out empty dialogue at every turn about “what we don’t know” or “other generic, vague illusion to information that won’t be important four episodes from now”, and seemingly has no idea what to do besides that (when it isn’t being Rebecca, it is being Izzy – constantly begging for validation, big-eyed and offering absolutely nothing constructive to the proceedings).

By the end of “Topanga”, we’ve seemingly shuffled our characters into two locations; once Gavin and Izzy go through the sinkhole, we’ve seemingly left 2021 Los Angeles in the dust for good (which I’d say was a good or bad thing, if anything in Los Angeles held any sort of consequence for what season one was, or where season two might be going). Isiah is in 1988, Silas (who is a scientist? Still not sure why he matters) is in 10,000 BC with most of the Time Gashers, where Gavin and Izzy seemingly landed (though near Seattle, a trip they brought absolutely nothing along to survive on, a detail so fucking maddening I almost wrote this entire review about it). There’s a building, and Josh is somewhere, and Marybeth is dead… all of these feel like Post-It notes dropped across random parts of this episode, with no context or satisfying emotional resolution provided anywhere to bridge the gap between seasons.

Mystery-chasing is something a show like La Brea is naturally inclined to do; but La Brea posits itself as something better than it is, every time Shithead Scott opens his mouth and mentions LOST (or its creator does another interview promising that its mysteries will be resolved “unlike other shows in the genre”). What La Brea and David Applebaum fundamentally misunderstand is the chase means absolutely nothing if we don’t care about how we get there, and who we get there with. At no point during its first season has La Brea done the legwork to build a bridge between its audience and characters; it offers up things like Josh’s immaturity as signposts of character, then abandons them when the opportunity to be a Hero Boy or an Angry Teen bear their head (or in the case of “Topanga”, Vague Time Travel Byproduct Tummyache, which “afflicts” him and Izzy most of the hour).

At the end of the day, I could really give a shit if a show’s plot makes sense; LOST works because its main plot thread holds together, and it illuminates its characters with deep, emotional storytelling that isn’t afraid to employ allegory to deliver tone (which for La Brea, is simply “loud” for 10 hours, with nothing else to offer). La Brea, in a lot of ways, feels like a show afraid to challenge itself, with complex characters or a unsatisfying resolution; rather than find moments of nuance to build connective tissue between story, characters, and audience, La Brea instead posits that pure plot gymnastics is enough – which is would be, if any of its plot twists were interesting in any way, shape, or form (which do you prefer: dead lesbian, scientist grifter lady who speaks in incoherent riddles, or Josh stuck in 1988?).

The only question left, I suppose, is what does “Topanga” promise is in store for season two? Given that its big reveal is “some people go through a new Time Gash, and some don’t”, there really aren’t a lot of obvious new threads for the show to pull on. We still don’t know why people make stone hands, or what the Silas of it all is – but again, it doesn’t seem like La Brea’s bloodlust for more story at any cost is going to slow down to let these stories breathe. How Izzy survives in 10,000 B.C. without a water bottle is a story, I guess? Josh in 1988… I don’t know, I’m pulling at straws here.

Ultimately, “Topanga” feels like it makes the wrong decision at just about every turn; by the time Scott is mouth agape at a CGI building in the distance, it seems clear La Brea isn’t aiming for logic, emotion, or tone with its storytelling. It doesn’t aim to understand science, or feeling, or time travel… it simply exists to be a Mad Libs of plot beats and pretty faces, emptily acting out whatever this week’s series of expositionary monologues have to offer. With “Topanga”, La Brea proves that it is the ultimate sinkhole, a cacophony of bad plot twists and empty character motivations, assembled in such a way that feels strangely proud of how utterly devoid of creativity it is. Both illogical and boring, “Topanga” is the nadir of dramatic, event-based television series – even in a post-Flash world, it is hard to make time travel boring, which is perhaps the only underhanded compliment I can offer the maddeningly empty finale to La Brea‘s first season.