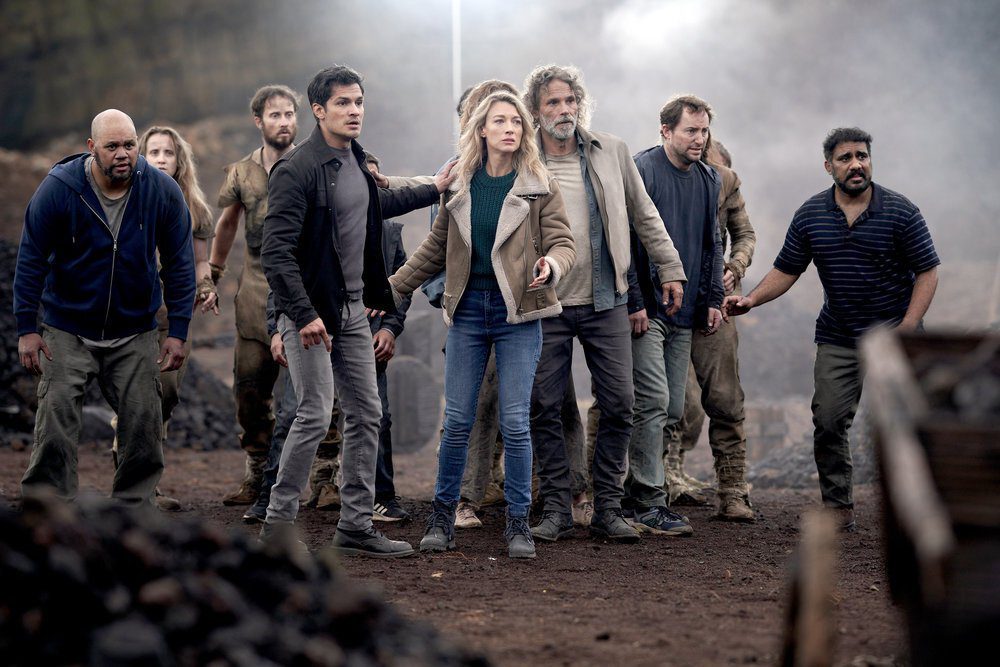 With 3/4 of the Harris family reuniting, “The Great Escape” is ostensibly a momentous episode of La Brea. Lest we may forget amongst the Exiles, mined fuel sources, and mysterious futuristic security cards, La Brea is a story about a family with a literal hole blown through it, as a result of the combustive mix of marital infidelity and alcoholism. But following the events of “The Cave” – and frankly, the previous 12 episodes of the series – “The Great Escape” doesn’t land with nearly the impact one would hope – and in fact, feels like La Brea really has no idea what to do with this love triangle anymore.

At this point, it seems clear Levi’s story is going to end in some form of self-sacrifice. “The Great Escape” opens with him and Eve having some post-coital cave prison cuddling, only interrupted when they are risen to begin their labor for the day. Eve’s finally made a choice, and she’s working with that Virgil dude to concoct the world’s dumbest plan of escape (“Just hope we can overwhelm them, and run real fast into an open field!!!”); for about eighteen seconds, Levi’s a character who can put a bit of fire into this show’s narrative.

That is, until Gavin shows up, and reminds us who the protagonist of the story is; but one flash of that childhood scar, and Eve is convinced that the Gavin’s she been reunited with is “exactly like the man you used to be” – which, you know, is totally easy to tell when escaping a prehistoric coal mine (speaking of – for people mining a fuel source, why is everyone so fucking CLEAN all the time?). Immediately, Levi is relegated back to lame-ass sidepiece status; you can almost hear him audibly sighing just off-screen whenever Eve looks at Gavin.

There’s not really time to get into all of this in detail, of course – so we just need to trust that Eve really can’t make up her mind (hey, at least she doesn’t kiss Gavin with the same mouth she just put all over Levi, right?!). But it seems like La Brea‘s made up its mind, which robs this dynamic of any intriguing, or even vaguely dramatic, qualities. Eve’s going to always keep Gavin in the foreground because he is in the foreground of La Brea: the show makes no qualms about him as its redemptive figure, which only leaves one bit of intrigue left for a story that is really just beginning – and that’s how it ends, hardly the position you want a major romantic story of the show to be in.

Elsewhere, nobody wants to do anything about food except for Lucas, Veronica, and Scott (though Scott is really just around to tease more Aldridge plot bullshit, another vague conversation that does nothing to advance the mystery narrative): and though it is a stretch to call it exciting, seeing Lucas contend with his consciousness at least offers a bit of texture La Brea so desperately needs with its characters. How soon we (or at least I) forget his goofy, tragic backstory as a former drug dealer and victim of mother-killing-father violence: seeing him contend with that legacy a bit as he nearly confronts the dude who mortally wounded his mother is the closest this series has come to character development in ages.

(The whole Lucas/Veronica thing, however? No fucking clue what that is about, or why it is needed).

Their pursuit of food is meant to parallel the convoluted, dumbass plan Levi concocts; however, neither of these escapes really could be considered “great”, in that the most dramatic thing to happen in either plot is Levi and company beat up a few guards before being put back to work. That’s really it; our trio of thieves are not disturbed in their pursuit (semi-related: how this show conveys the passage of time in this plot is completely fucked), and the status quo between any of its characters are undisturbed by the events of the hour (unless you count Paara, who awkwardly breaks up with Ty when she finds out Silas has escaped).

Despite a lack of stakes, and the continued regular frustrations with how this show handles character and narrative, “The Great Escape” is an improvement over the previous two episodes, if only because it keeps moving through its own bullshit, never pausing too long on Izzy Face or Levi’s downtrodden face when he sees Gavin smelling the same air as Eve. On a better series, “The Great Escape” would feel like larger and more weightful than the entries immediately surrounding it, a surprising, early-season resolution to a major plot arc by reuniting most of the Harris family. Instead, La Brea is simply a slightly more watchable show then it’s been, mostly smart enough to avoid trying anything of depth and meaning.